A new study on solar-powered greenhouses presents great prospects for the future of eco-friendly farming. Researchers have tested greenhouses with semi-transparent solar cells to see how they impact the growth of the plants.
By generating electricity through these cells, the energy consumption can be reduced and the researchers tested the produce harvested afterward. They examined red lettuce and noticed that there was no major difference between the health of this lettuce and others grown in traditional greenhouses.
The solar panels did great when it came to equalizing the temperature inside the greenhouse and even plant sizes stayed almost the same.
The panels introduced in this experiment are semi-transparent solar cells, but they are organic and not silicon-based ones. What makes these cells truly promising for future developments is their flexibility, as they can be shaped to absorb light from different wavelengths.
This makes them one of the materials of the future, as they will most probably be used as windows for eco-friendly buildings. 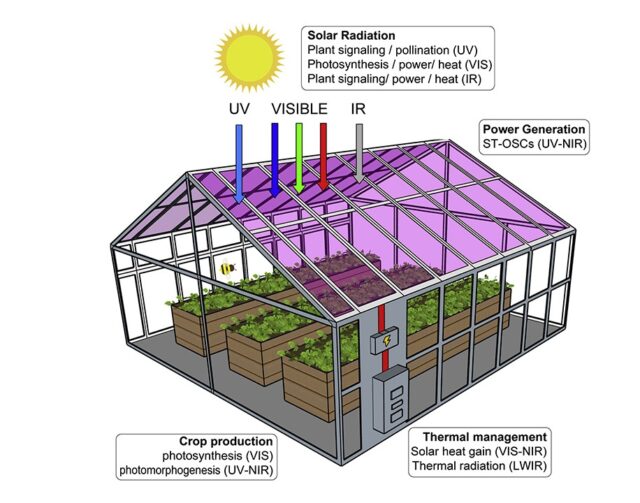 “We were a little surprised – there was no real reduction in plant growth or health,” says plant biologist Heike Sederoff from North Carolina State University. “It means the idea of integrating transparent solar cells into greenhouses can be done.”

“Greenhouses fitted with semi-transparent solar cells can generate electricity without affecting the growth and health of the plants inside, according to a new study, suggesting we could build energy-neutral greenhouses without harming crops.”

“Based on the number of people who have contacted me about solar-powered greenhouses when we’ve published previous work in this space, there is a lot of interest from many growers,” says O’Connor.

“I think that interest is only going to grow. We’ve seen enough proof-of-concept prototypes to know this technology is feasible in principle, we just need to see a company take the leap and begin producing to scale.”

The research has been published in Cell Reports Physical Science.