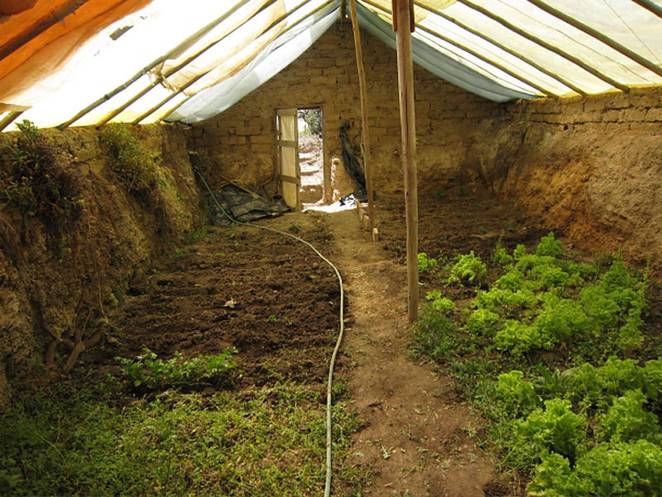 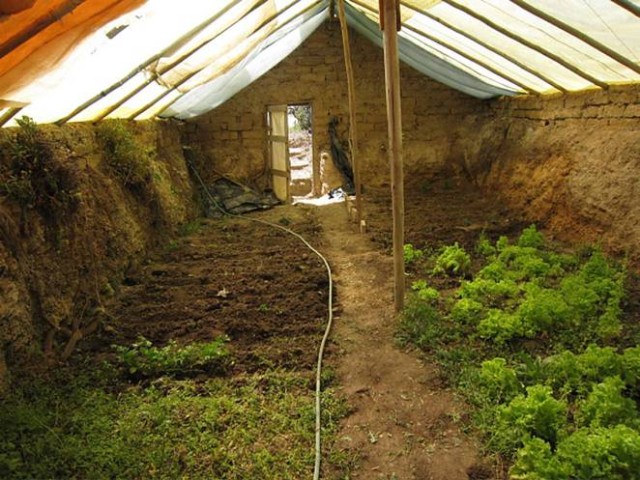 The underground greenhouse (or pit greenhouse) is mostly buried into the ground because the soil helps keep the temperature constant, somewhere around 16 degrees, when placed at one-meter-deep, even if outside the thermometer shows a temperature below freezing-point.
How to build it?
First of all you have to choose a place that is sunny all year long, and the excavation needs to be at least 1 meter deep. The walls have to be tilted in order to be able to support the roof without collapsing, and be oriented from the East toward the West.
The northerly wall of the greenhouse has to be taller than the one oriented toward the south, because that is how during winter it will be able to capture all the sun’s heat, and during summer the sun light will be reflected. The roof needs to be tilted at 39 degrees, from the north toward the south. 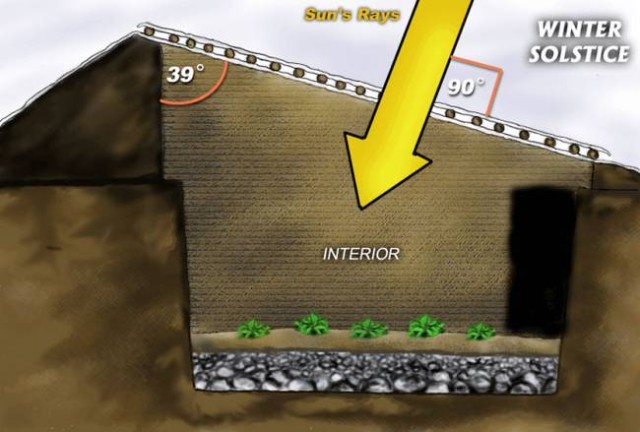 The northerly wall will be built by using the soil obtained after digging the pit. This wall will protect the roof against strong winds from the north during winters. Last but not least, try to use plastic to cover all the surface of this wall in order to avoid water infiltrations. Against the walls place some raffia bags full of soil for better resistance.
Before adding fertile soil for plants, add at least 30 cm of gravel underneath it. This layer will drain the surplus of water from the underground greenhouse. Furthermore, above the roof make small holes and use some plastic tubes also for draining. By doing this you will protect your greenhouse against flooding.
At the same time, the height of the roof is established according to the length of the greenhouse. It’s an easy and cheap thing to do since you mostly use plastic covers and wood. If the greenhouse’s height is 3 meters, then you only need pilings in the middle of it.

In order to avoid any heat loss it is recommended to build a double roof with two layers of thick covers and a minimum space in between them of 10 cm.
If the greenhouse is wider, then you have to construct the roof so that it does not collapse when the wind gets strong, or when it rains and snows.
You need to have a well protected entrance to the greenhouse against the rain. Also, the entrance will be used during summers as ventilation. If you need more ventilation during summer just make another entrance in the other part of the greenhouse.
After you finished all the preparations you just have to plant the seeds and there you go!

Garden Design : The Most Beautiful Flower Garden In The World...