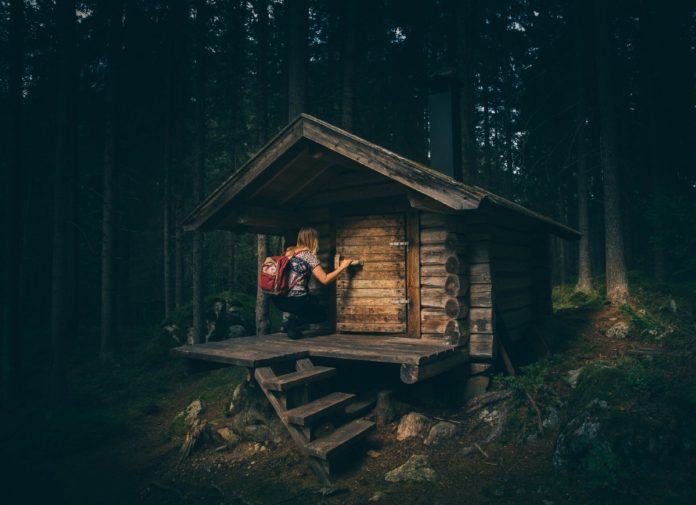 DIY : Tiny Houses are For the Birds – dori mondon-freeman – Medium

They aren’t for creative families with pets, though.

When I first moved into the cabin, I was a single mother with a four year old daughter who still slept in my bed, a 50 pound dog, and a 15 pound Maine Coon cat. Our 600 square foot space (which I realize is on the large end of what’s generally considered a “tiny home”), tucked very shadily into a grove of massive pines and cedars on an unfenced acre and a half of land, worked for us — it gave me less to clean, less stuff to manage, and less square footage or utilities to pay for.

Soon, however, I resurrected my upcycled-leather jewelry design business, which began taking over a corner of the cabin. My daughter started getting into Legos and participating in dance recitals that required elaborate, floofy tutus we “got” to stuff into an already-maxed, tiny little closet afterward. Thrift shopping, an addiction of mine, also continued.

A year and a half into that, I fell in love with a musician. Along with her came a collection of guitars, electrical cords, and weird electronic boxes covered in blinky lights, and another thrift-shopping addiction.

We also added another rescued dog to the mix, a 75-pound, grinning gasbag of a Treeing Walker hound that did not know her own size or strength and tended to follow her nose off the property and out to the neighbors’ trash.

And also, we like outdoor recreation. Bikes stacked up outside, as did things for hanging out in the numerous bodies of water and thousands of acres of national forest all around here — kayaks, tents, floaties, coolers…

By the time our cabin began to implode, I’d already been harboring secret dreams of moving into an actual house anyway. Having lost a good portion of my sanity by an inability to ever walk from point A to point B without tripping over someone or something and suffering from a total lack of privacy or personal space, I’d had enough.

I hear you, it’s about saving money and being able to have experiences.

I spent decades in New York City. I know what it’s like to live in, basically, a walk-in closet, though I mostly eschewed the Manhattan lifestyle for that of a loft-dwelling Brooklynite instead, where I live/worked with floor-to-(20-foot)ceiling windows and did things that required space. Had I the sort of jet-setter, hyper-working corporate life that involved, mostly, needing a large closet and somewhere to sleep, tiny accommodations might have worked for me, but I’d gone running from the hyper-social corporate life about the time I saw it start to crumble anyway (Internet 1.0 was really fun, though, while it lasted).

I live both a simple as well as a cluttered life. It’s my artistic stuff that involves most of the clutter however: the shelves of craft, gardening and permaculture books, homeschooling materials and life-living advice, the stacks upon stacks of leather and skeins of yarn… These things do fill my space, absolutely.

I lived for long periods of time much more simply, too, while I had some “experiences” — traveling via car, via foot/backpack, by plane, or camped out on some farm in my tent for months at a time with simply the bare necessities — I know the lifestyle, and it’s so enjoyable, but in the end, I want to come home to spaciousness and art supplies. I know this about myself now, in my 40s. I enjoy having a yarn stash and a personal library.

We’re all a bunch of homebodies.

This past weekend we waved goodbye to the cabin and moved ourselves into a modest three-bedroom, two-bathroom home on some fenced-in acreage. We have windows everywhere now that need curtains. We own a couch we can all sit on together, finally. My wife has space to set up a music studio without me bitching about electrical cords and blinky lights everywhere. My daughter has her own bedroom, somewhere she can be creative, and where I can send her to when she’s being a brat. My dogs can let out a room-clearing fart and we actually have somewhere else to escape to. I can fart, too, and my wife doesn’t have to love me anyway. There’s a real kitchen, and I have a whole cupboard already dedicated to fermenting things, shelves for the apothecary I’ve started planting outside, and counter space — oh, beloved counter space, where a convection oven and an electric pressure cooker live out in the open. In the corner of the living room lives a giant wood stove.

And out in front of the house, where I’ve begun building and resurrecting garden beds, is a large tree. In that tree hangs a tiny little house.

It’s for the birds.

DIY Projects Video: Easy Do it yourself home decorating ideas