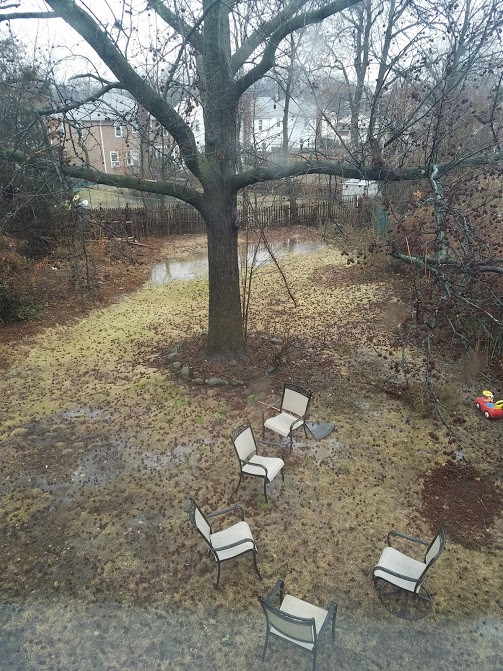 DIY : The Perils and Opportunities of Owning a Backyard – Jonathan Bender – Medium

It’s getting dark, my arms and legs are sore as hell, and I’m covered in dirt. That’s all okay, because I’ve accomplished at least part of what I wanted to get done. I now have about twelve plants in the ground of my new house’s backyard.

Gardening used to be easy. Everything is pretty easy in a rental house. Those times the washing machine broke, or the sink leaked, or the bathroom drain got clogged up, I could call my landlady. It did not happen within minutes, but things did get fixed. And most of the time, I did not have to pay for any of it. And as a bonus, the lawn was mowed, there was a little flower bed was us, and gardening was pretty easy. Life was simple.

And then I went and bought a house. It made sense — two young children, the need for our own space, a desire to live in a nicer town, equity. Home ownership is great. But people forget that homes tend to have backyards. My house’s previous owner certainly did.

Of course, I did not really consider this when I bought the house. We toured the house in September, and closed in December. Living in the US Northeast, we basically saw the yard as summer was closing, and again as winter was in full swing. And it looked okay. Sure, there were overgrown vines here, a gnarled tree there. No matter, we’re home-owners now! Give me those keys, sign those contracts, and all else can be fixed.

The thing about living anywhere is this: the longer you stay there, the more you find. Never mind that we found out the basement got puddles on the floor when it rained too much. A French drain fixed that issue, but it did set us back thousands of dollars. That backyard, though. I resolutely refuse to pay to get something done which I can do myself.

At this point that I started to notice things. It turns out that those slightly overgrown vines were not in fact slightly overgrown. They were everywhere. What used to be a flower bed was ankle deep in vines and weeds and plants that would normally be in a swamp. Or horror movie. That gnarled tree happened to have lots of friends around. And the worst part was these trees were, how to say, not trees. They were those nasty little weedy tree things that come up from the ground and keep growing even after you chop them down. Not to mention that some were dead, choked to death by out of control vines. There was a nice rosebush, though it was so overgrown that it blocked access to half of the yard.

Apparently the previous owner of this property was not a big fan of garden work.

Again, not a problem! You know who has two supposedly strong arms and is a fan of yard work? This guy. And his wife, who grew up in the Chinese countryside. That woman could cut down an oak tree with a toothpick if given enough time. And so we got to work. And work. And still more work. The fight was on.

Two weekends later, and we had a giant pile of cut down weedy trees, torn up vines, trimmed bits of rosebush (wear gloves, people), and sections of old fence. It turned out that the vines had grown so thick they had engulfed some bushes, many of which had later died. Out it all came. The vines had also knocked down parts of the picket fence. It had appeared to stand up-right when we toured the property only because the vines had held it that way.

One rental pickup truck, two trips to the local composting center, and a fair amount of loading, pulling, stomping, and unloading later, and Round One was finished. Take that, overgrown garden. How dare you try to revert to your natural state.

The trouble with gardens is that unwanted plants tend to grow back. When spring rolled around, it stayed cold for far too long then got hot fast, and then got cool again but far too rainy (climate change, people). There was a positive explosion of green. All those dead looking vine remnants that we left in the ground? Very much alive, and within days, four inches tall. Everywhere. Time for Round Two.

At this point I learned that the best tools to have in this situation are a sturdy pitchfork, a strong rake (the kind with the short teeth that branch down from a cast iron bar), some upper body strength, and a lot of time. One afternoon of running the rake through the weeds, using the pitchfork to loosen the soil, and running the rake through the soil again, and I was happy. I had taken out enough rocks and stones to major in geology, and now had a new pile of ripped up garden waste to haul away.

More good news: now I had a ten-foot by twenty-foot bed. With no weeds. I know this because I personally ripped out the vines’ roots, which were around an inch thick and were buried up to six inches underground. The bad news, my back yard is 150 feet deep. Even more bad news, those probably were poison ivy roots, and now I’m itchy too.

But hey, small victories. It was getting dark by the time I was finished murderizing weeds, so my wife and I dug some holes and put in peppers, tomatoes, basil, strawberries, cucumber and zucchini. We had grown these in our old apartment’s garden, and now we proudly grow them in our own backyard.

To be honest, the amount of remaining work can seem daunting. But I can’t wait to see what I can do. Round Three is coming, and it will bring flowering perennials, hedges and maybe even fruit trees. Watch out, garden. It’s going to get dirty.

DIY : The Deck. Redux. Part II. Plus, Related Decking and...

DIY Projects Video: Recycled Pallet Ideas – Do It Yourself!!

Home Improvement : How To Save Money In The Long Term...