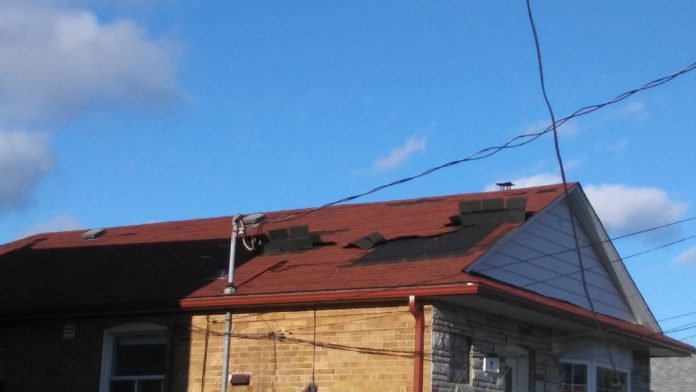 DIY : Repairing My Roof from the Windstorm

One of the key selling points when I bought my house back in August 2012 is that almost everything inside and outside was brand-new. It had newer windows, new appliances, newly-renovated kitchen and bathroom and a new roof. Before making an offer on the property, I did what most homebuyers do and hired a certified and experienced home inspector. The home inspector didn’t have any concerns with the roof. So to say that I was surprised to come outside my house one morning and find shingles laying on my fence would be a huge understatement.

My house has taken a beating over the years from the weather. Five years ago I was without power for almost a week after a major ice storm. However, my house made it through that weather related disaster relatively unscathed. So, when I heard there was a wind warning on Friday, May 4th, I didn’t worry too much. There had been plenty of windy days over the years. This one didn’t seem like anything out of the ordinary. Boy, was I wrong!

When I got home from work in the evening, I found major damage to my roof. The strong winds had torn shingles right off my roof leaving it exposed to the elements. There were asphalt shingles everywhere! I surveyed the damage before heading inside for the night.

Now I’m somewhat handy around the house. I painted my garage door, installed a door in the basement and painted my bathroom, but roofing was a whole new ballgame. I could have tried to repair the roof myself, but since the damage was so extensive, I decided to hire roofers. Some renovations are best left to the experts. I didn’t want to attempt to repair my roof, only to have it leak and cause thousands of dollars in damage, so I started phoning roofers immediately.

The first challenge was finding someone to repair my roof. I found out I wasn’t the only one dealing with roof repairs. The phones of roofers were ringing off the hook. I did what I always do when hiring someone to work on my house — I did my homework. Truth be told, the vast majority of contractors are honest people. Unfortunately, there are a few bad apples out there that give contractors a bad name.

I phoned family and friends for personal recommendations and went on the HomeStars website. I must have phoned at least 10 roofers. I spoke with 3 roofers and got verbal quotes. (Some roofers were even offering specials on roof repair related to windstorm.) Normally, I wouldn’t feel comfortable working with a contractor who quotes me an amount over the phone without seeing the job in person, but since this was a relatively small and straightforward repair and I needed it done quickly, I didn’t think there was too much of a risk.

I hired a roofer whose price was fair, had an excellent rating on HomeStars and who could repair my roof quickly (some roofers were so busy that they couldn’t repair my roof for almost a week). The roofer came by that weekend to repair my roof. I’m pretty satisfied with the roof repair. There weren’t any surprise charges. The roofers didn’t try to upsell me on extra repairs. I paid exactly what I was quoted on the phone, $500. I didn’t have to pay a deposit up front either.

While the roofers were on top of my roof, I asked them to look for any further damage. They noticed that the chimney cap came off. Luckily, it landed in my neighbour’s backyard, so it would only cost $150 to repair my chimney. The roofers did note a couple interesting things though. The shingles on my roof would be ok for a “few more years.” This is no surprise since the roof was 2 years old when I bought my house and 8 years old at this point. The roofers also noted that the flat roof on my garage would likely need to be replaced in the next couple years.

Why Every Homeowner Should Have an Emergency Fund

My roof repairs are a reminder about why it’s so important for every homeowner to have an emergency fund. There was no way I could have predicted that shingles would be torn off my roof due to a windstorm. There was also no way I could have known that I’d need to replace my dishwasher right before the holidays. Luckily, I was financially prepared. I had an emergency fund of $10K.

With homes there are two kinds of renovations and repairs: planned and unplanned. The planned ones are ones that you can anticipate like a replacing your roof or installing new windows. Those are much easier to be financially prepared for. You can start putting money aside ahead of time. For example, if you know you’re going to need to spend $4,200 on a new roof in in a couple years, you can start putting aside $175 per month, so the money’s there waiting for you when you need it and you don’t have to go into debt.

The unplanned ones are tougher to plan for. Those are the home renovations that come “out of the blue” like a surprise roof repair. For that reason, it’s important to have emergency savings on hand to deal with these costly home expenses when they arise. A good question to ask yourself is, what is the worst thing that could happen to my home? Although, we have home insurance to protect us from major home repairs, oftentimes it’s not worth making a claim. You’re better off paying out of pocket, since it may not be covered or it may be less than your deductible. (The claims adjuster came by my house to assess the damage. He said it’d cost under $2,000 to repair. Since my deductible is $5,000, I decided not to file a claim. I might lower my deductible to $2,000 after this though.)

If you’re unsure about how much money to put aside, a good rule of thumb is three to six months’ worth of living expenses. You’ll want to keep that money in somewhere that’s safe and easy to access (no, not Bitcoin). A high-interest savings account is the ideal place to sock away that money. You’ll be glad you did next time you’re hit with a surprise home repair like me.

Sean Cooper is the bestselling author of the book, Burn Your Mortgage: The Simple, Powerful Path to Financial Freedom for Canadians, available now on Amazon and at Chapters, Indigo and major bookstores.

DIY Crafts : How To Make Your Own DIY Wooden...

DIY Crafts : A DIY Flip Photo Album for your...