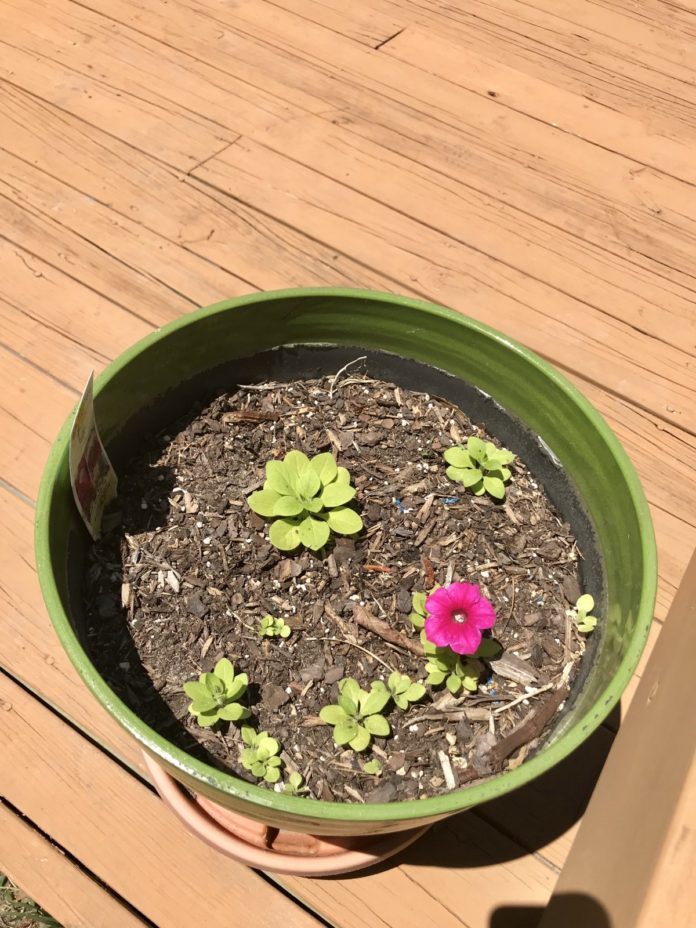 There are a lot of things that come along with owning your own home. You have to constantly do upkeep — pressure washing every 1–2 years (depending on how picky you or your neighbors are), mowing, staining decks, re-painting doors, squashing down mole tunnels, treating ant mounds, and the list goes on and on…

But sometimes there are things you don’t have to redo…like flowers. Even the ones containing the word annual instead of perennial. Don’t believe their tags. The annuals I’ve planted have returned every year (unless I’ve killed them;). I actually just googled snapdragons and petunias and both are considered perennials unless you’re up north where they are actually likely to die every winter because of the stinking, bitter cold (but the Lowe’s tag says annuals).

These petunias I planted last year are a hardy and spreading bunch. I found them in the same pot where they started their life last year:

Matter of fact, they don’t seem to care where the wind blew their seeds and took up residence in dangerous and hostile environments like next to a kid construction site:

I found these plants on sale last year at Lowe’s and they grew in huge clusters with bright pink flowers. They died in the late fall. I’ve been watching to see if they’d come back and last week I saw a bunch of green leaves sprouting through the sandy soil. Once they come up a bit more, I’ll rake over the straw and toss down some mulch.

Yes, mulch. You all recall my utter adoration of mulch, right?And $1 flowers but we’ll get to that later.

What else has come back?

My mums are making a teeny tiny effort to surface.

And we can’t forget the giant coneflowers that grew around my mailbox last year.

Yes, they are also coming back…except not quite close to my mailbox. It’s okay…that’s another upcoming blog post project.

Something else that comes back every year: snapdragons! And the kids love to pluck the blooms off and squeeze them so it opens like an actual mouth.

TIP: If you wait, they will come back.

DIY Crafts : Repurpose and Upcycle a vintage orange or...

DIY Furniture : Coffee Table turned Ottoman before and after...