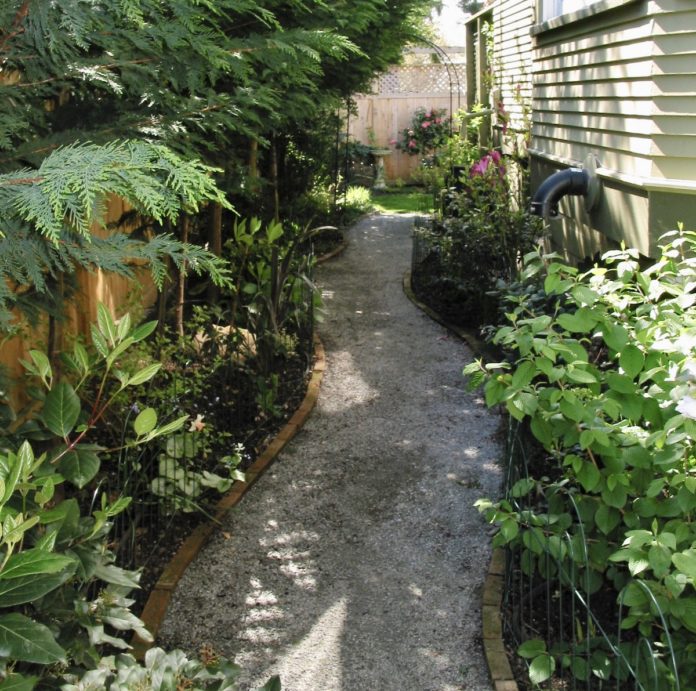 DIY : How to Install a Gravel Path in the Garden – Karen Hugg – Medium

When people think of gravel, they think of the depressing gray rocks used to create driveways or the sloshing sound of pea gravel in Japanese gardens. However, building a gravel path doesn’t have to be a depressing or slippery experience. I’ve found that a gravel path can be a simple, inexpensive, and beautiful way to showcase plants while moving a person from point A to point B. You just need to remember one thing: go fine.

When designing a garden path, consider the width and shape of the path, the edging to hold in the gravel, and the gravel itself. Narrow paths are functional but feel so enclosed that one psychologically wants to move quickly along it. Wider paths feel more spacious and therefore invite you to stroll leisurely. In city side yards, it’s difficult to find the space, but I’ve found in my own yard and in clients’ yards, a 2 1/2″ wide path feels comfortable enough to linger.

While a straight path is a functional choice, it doesn’t offer any natural beauty or mystery. Even the slightest curve in a path helps soften the view and feel more peaceful. Curves sort of mimic the relaxation one feels when looking at the ebb and flow of the ocean. So if you can recreate that rhythm in a path, you’re already one step closer to a restful retreat. The best way to create those curves is to lay out garden hoses where you want the edges and then trace their contours in the dirt with a stick or lime dust.

It’s important to excavate the soil 2″ to 3″ down and create a pocket in which the gravel can sit. Still, dirt can shift into the path and rock can shift into the soil. Therefore, one needs edging to hold in the material — unless the natural look of gravel beside soil is preferred. Edging can be as cheap as the black plastic you find at hardware stores or blocks of granite found at the rockery. When working with gravel though, it’s best to line the path with something sturdy such as bricks, large stones, pavers turned on edge, or even pre-made concrete borders.

What Size of Gravel?

There are several sizes of gravel and choosing the right one is critical to the beauty and functionality of the path. First, many people are unaware of the difference between crushed rock and round gravel. Gravel can be either rocks that are mined (or tumbled) with rounded edges, or mechanically crushed to make sharp angular edges. The former will always slip under car wheels or feet because its edges will slip off one another. Crushed rock however locks together for a more compact surface. If the size is too large though, it’ll still be quite movable.

Oftentimes people will order gravel in bulk from their local nursery or soils dealer. The rocks are usually basalt, and anywhere from 3/4″ to 1 1/2″ in size. Later, after tires have rolled over the area or feet have crossed it thousands of times, the gravel separates, bare dirt appears, and weeds sprout. So when building a surface that needs to be hard, compact and weed-less, not only use crushed rock, but one that’s ground to about 1/4″ or less.

My favorite choice is “3/8ths minus crushed granite” (though red lava rock, terra cotta, river rock, black pebble, and marble chips are also available). This native stone is crushed to 3/8ths of an inch and finer. The finer rock, or the “minus,” is a mix of particles down to the size of dust. And it’s this mix that creates the solid, smooth surface. As the gravel settles, the smaller particles act like a glue, filling in the tiny pockets of air that the edges of the larger pieces create. The result is a surface almost as hard as concrete, but as permeable as soil.

Once you’ve decided on a path shape and materials, the process is fairly straightforward. First, buy the gravel in bulk from a rockery, which is usually inexpensive. Prices range from about $50 to $75 a ton, depending on the rock. The masons at rockeries know a lot about rock as opposed to nursery help or soil dealers. If you own a truck, you can get a load of gravel yourself but rockeries will also deliver for a fee. To build the path, lay out the weedblock in the excavated pocket to discourage whatever roots or seeds may be hiding in the soil, making sure to overlap the pieces. Then set the edging atop the weedblock wherever possible just to ensure there are no weeds popping up through the cracks between the bricks.

Because I use a crushed granite with dust, I don’t use a base of sand. Many masons however would suggest a base of 2″ of sand. I’ve never had a drainage problem in the paths I’ve installed. So after the weedblock is down, I go straight to shoveling the gravel into a sturdy wheelbarrow and dumping it on the path, starting from the furthest point out and moving inward. One note about dumping gravel: either use landscape pins to secure the fabric to the ground or scatter small amounts of gravel on the area on which you’re about to unload. Then the weedblock won’t fold and twist under the weight of the rock.

After every couple of wheelbarrow loads, rake out the gravel and level it. Often it makes sense to create a hump in the middle, like a city street, as foot traffic in the center could otherwise create a depression. Ideally you want the path to be 2″ to 3″ thick. After the spreading is finished, spray the path with a hose to work the finer pieces downward and compact the material. As the dust washes down, the larger speckled gravel appears. The white rock combined with black specks creates the illusion of a silvery blue color from a distance. In a shady area, it reflects light considerably and at twilight, it utterly glows in the dark.

After the path is in, the fun of planting begins. Along that first side yard path I installed, I planted blue grasses and hostas whose steely blue tones call out the blue tones of the granite. The icy blue flowers of Hydrangea macrophylla ‘Variegata’ blend harmoniously with the light color while the dark glossiness of Helleborus orientalis and Viburnum tinus pop against it. I love both the gorgeous highlights and the contrasts, but most of all I love how something so simple and so effective can also be so beautiful. My husband likes it because it’s a kind of permeable concrete. Whatever the reason, it works for us.

DIY Crafts : A nice gift for the holidays is...

DIY Furniture : You’re gonna be obsessed with this summer...