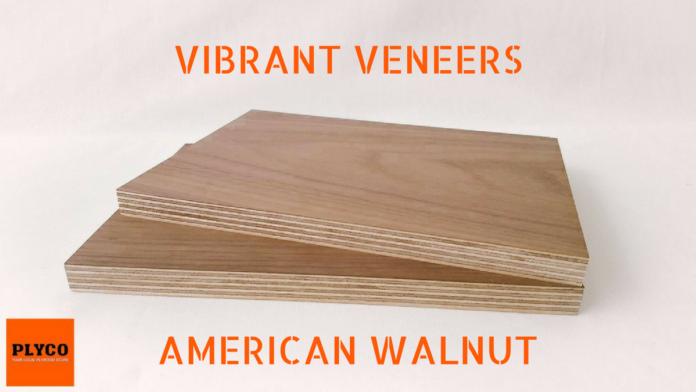 Plyco’s Vibrant Veneers blog and social media crossover series is back for week two, and after heading to Western Australia to check out our Jarrah veneers we’re flying all the way to the United States of America to get the inside scoop on our American Walnut! Available in both our Strataply and Laminato ranges, the American Walnut veneer is a standout star in our collection of stock veneers.

With the American Walnut veneer, you find yourself with a gorgeous, darker brown colouring, which is quite unique compared to the lighter veneers we offer and the dark red colouring of Jarrah. Despite the darker colouring, you’ll still have stunning natural wood grains on show. In fact, the colouring of the American Walnut enhances the wood grain and really makes it pop! Applications where customers are seeking a beautiful architectural finish while also keeping an air of woodiness or earthy and natural vibes, this is the product for you. Combining these stunning visual characteristics with the fact that it is pressed onto Plyco’s signature Birch Plywood, MDF or Particleboard products and you have a winning combination of style and substance.

An American Walnut tree out in the wild

While American Walnut is the common name and one you’ll hear quite frequently in timber and woodworking circles, it is also referred to as Black Walnut, Eastern Black Walnut, Virginian Walnut, Californian Walnut, and its botanical name of Juglans Nigra. As one would presume based entirely on the name, the species of tree that is the basis for the American Walnut veneer is found in America. The Juglans Nigra is a highly versatile plant, as it not only provides timber veneers and timber in general, but the black walnuts they grow are edible and they also produce dye. The walnuts that they provide are actually extremely popular and often used in ice cream, baked goods and confectionary. The dye it can produce often accidentally stains unexpecting bystanders such as cars, sidewalks and patios, as the walnuts contain juglone, plumbagin and tannin that makes it extremely easy for the dye to rub off.

A black walnut from an American Walnut tree

American Walnut trees can be found in many suburban areas thanks to squirrels distributing and burying their seeds, however, it’s more natural location will see it growing in closed, dense forests, in areas where there are high levels of sunlight. Riparian zones are also a common source for American Walnut trees. These zones are found at the interface of land and a stream or river. Specific locations that have an abundance of these trees include South Dakota, northern Florida and central Texas.

Unfortunately, these beautiful trees have come under threat thanks to Thousand Cankers Disease. This disease is prevalent in walnuts and is a result of the combined activity of the pesky walnut twig beetle and a canker producing fungus called “geosmithia morbidia”

Thanks to its visual characteristics, our American Walnut options in both Strataply and Laminato make it the perfect solution for any architectural applications, such as shop fitting or wall and door panelling. However, with the ability to press this veneer to Particle Board or MDF it can also be used in a whole host of other applications that also require a boost in strength and density.

Contact us for a FREE sample of our American Walnut veneer

If what you’ve read about American Walnut has piqued your interest head on over to our online store, where you can not only browse our Laminato and Strataply veneer options, but also our entire range of products! And now with our brand new shipping options delivery has been made that much easier!

DIY Crafts : Heather is back this month with a...