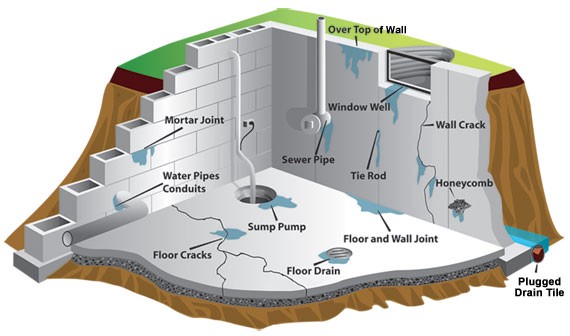 DIY : All You Should Know About Exterior Waterproofing Systems

There are homes which are inclined to the danger of water getting inside them doing massive harm to the outside and inside of the house. The real issue is incurred on the outside and inside basement of the building structure. The exterior waterproofing system is vital and no harm will be incurred on the basement once it is repaired and treated with waterproofing materials. In the event that the basement gets harmed on the outside, the residents will get affected permanently; however, by using the waterproofing systems one can prevent getting his/her home getting damaged.

In some circumstances where a house is completely built on soil, due to which the house carries most of the moist from soil, the risk or water seeping into the house greatly increases. In case more amount of moisture, the water may get leaked towards the basement and the water can do potential harms to the place, walls, and floors, here is the need to do exterior waterproofing successfully.

The dampness in the basements produces weird odors which lead to spread infections that can affect residents leading them to major health hazards. Growing of mildew and mold would start forming if the basement has moisture here again the place requires basement exterior waterproofing system so prevent more damage in the future.

The main identity of a damped basement is the presence of water which is getting leaked from the drainage system installed in the foundation. Either the system isn’t working properly or there’s something stuck inside the drainage pipes which lead to damp patches on the walls. These are the hints that the place really needs to be waterproofed in order to save the walls, basement, residents, and the entire house.

1 — First things first, the professional workers excavate the entire house from all the sides till the footings.

2 — After the soil is excavated, to protect the basement from several water problems, a protective membrane (some kind of fixer or waterproofing substance) is applied around the exteriors.

3 — Lastly, an advanced or latest and upgraded drainage system is installed as prevention also to stop further damage to the walls of the basement along with a new protective membrane. Sometimes, they also use plastic pipes for the drainage system which easily solves many problems as there are least chances of water being clogged inside the pipes. Exterior waterproofing is important to protect the interiors of any house that has dampness on the walls.

The only thing on your part which should be done with complete confidence and care is choosing the waterproofing service provider. Choose the one that provides guarantee and doesn’t cost you more than he/she should.

DIY Crafts : How to make concrete stepping stones for...