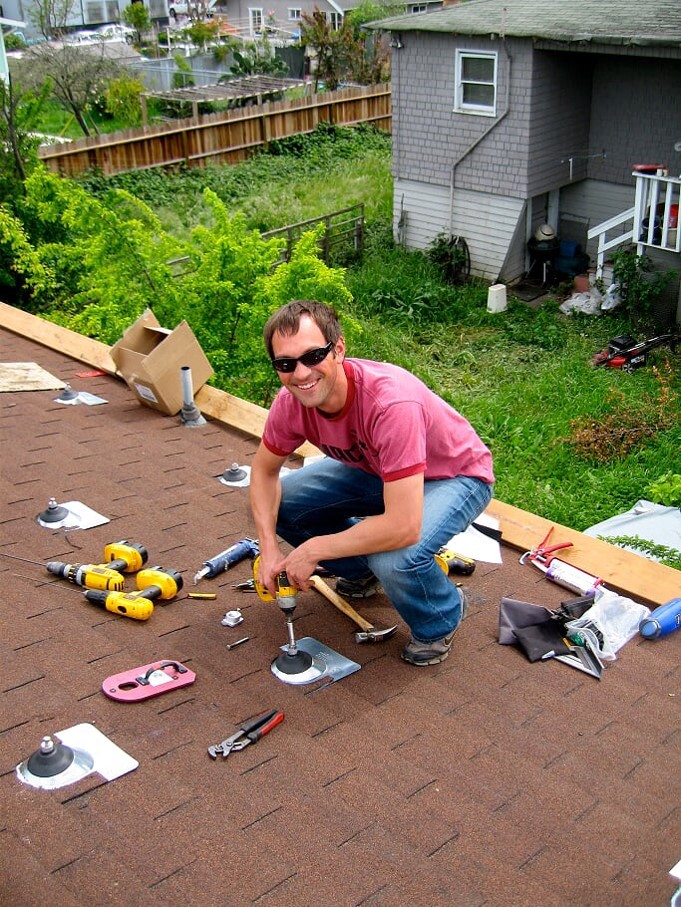 “We have this handy fusion reactor in the sky called the sun, you don’t have to do anything, it just works. It shows up every day.” — Elon Musk, CEO Tesla

My experience with solar

While I was studying at UC-Berkeley I had the opportunity to install solar panels on a house in West Oakland with Grid Alternatives, a non-profit that brings clean energy to everyone. This experience helped me to fully understand the system design for a solar roof from the power inverter to convert from DC to AC to drilling holes in the roof to secure the panels.

Later that year I was an intern at the Dow Chemical Company and was exposed to a new product they were taking to market, PowerHouse Shingles. Instead of having to install the flashings and panels on top of the roof the solar cells were designed into the roofing material. Below is an image of one of the first houses with this product installed.

These two experiences opened my mind to a future where we can generate energy from every roof in an America by replacing old roofs with solar roofs. There is a large market opportunity for this.

Solar energy harnesses a naturally recurring energy source in the Sun by converting heat to electricity. There are various types of solar cells, though photovoltaic (PV) is the most common, especially for residential solar projects. The below is a diagram that describes the various components that go into a solar system.

One of the challenges with PV solar is that the sun is not predictable everywhere in the US as a source of energy. The diagram below shows the solar resource availability across the US. It is clear that the desert Southwest is best. For the markets where solar is strong there is a large opportunity to shift electricity generation to residential.

Solar is still mostly an additional installation and thus an added cost of ~$20k for a standard 5kW system. Solar City, which is now part of Tesla, introduced financing options that lowered the cost to install solar through a monthly usage program and government incentives. My parents had this installed on their house in Oregon (in the orange color above) and on many sunny days are selling excess electricity to the grid. Unfortunately relying on incentives is risky, though can be a great jump start for an industry. In the last four years, nearly 10,000 MW of residential solar capacity has been installed, but as subsidies have been removed the growth rates have stalled. This is equivalent to a 5–10 coal fired power plants and enough for 1.6mm homes. At these rates about $10bn a year is spent on residential solar.

The rise in solar is driven by prices dropping dramatically. The two charts below show some of the price reductions. The top is for all solar and the second is for residential solar prices.

The intersection of solar and roofing is interesting. The roofing market is a $50bn+ market in the US with homeowners completing over 8mm projects a year.

The most common roofing shingle is the asphalt shingle. One of the key components of this shingle is oil. Over the past few years there has been an interesting trend where the producer price index (PPI) for roofing has broken away from the oil prices. Oil prices fell nearly 70% in 2014, yet asphalt shingles remained flat. This is likely why I have seen many service contractors willing to spend more on marketing to take advantage of this price arbitrage.

State of the Technology

Tesla purchased Solar City (for a long story on Tesla check out the Acquired podcast on Tesla). Solar City’s innovation was the financing model they setup. Tesla innovated their own version of solar shingles and later added the Power Wall battery to handle the ability to store power and charge your Tesla. Pretty sweet system if you have it.

Like many things Tesla they have elegant designs to set a standard for others to match. The shingles come in four different patterns:

This vision of the future is very compelling and exciting. Another benefit of solar shingles is that you can repair parts of a roof without having to replace the whole system. If this is so great, then what is preventing us from realizing this future?

It is clear to me that there are large advantages of integrating the two products into one. The future of the all-electric home from Tesla looks great. I think that what Tesla has built is a good predictor of the future and that it is now up to businesses to create the more generic low cost versions of these systems. All single family homes need a roof and if we can bring down the costs of the solar roof shingles, like what happened in PV, it will be more economical to install a solar roof than a traditional roof. 20 years ago it would be hard to imagine homes with solar panels and in 20 years hopefully we’ll expect roofs to help generate a large share of the energy for a home. Residential solar won’t be the only energy source, but can be a dominant solution for many homes around the US.

If you are interested in getting involved with Solar and/or want to give back to the community I highly recommend Grid Alternatives. They are training people to install solar panels by giving back to low-income families. When I did the project the whole neighborhood was wanting to figure out what the older lady in the house was getting done. It was a great moment and a vision towards the future.

DIY Crafts : Cathy is back with a soft, buttery...

DIY Furniture : Painted furniture inspiration that will make you...

DIY Crafts : Back to school Mad Libs are the...