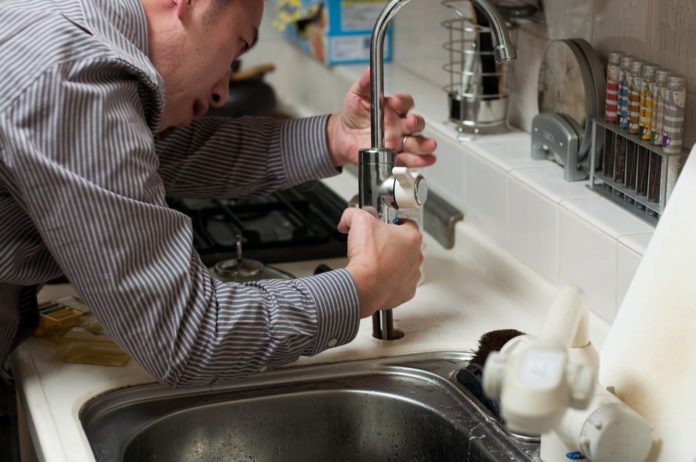 Calling a plumber for a rather easy plumbing repair that doesn’t require the presence of the plumber is a reoccurring scenario that gets the individual or caller surprised or irked after a fast repair by the plumber who had got more serious cases is a thing that could be brought to halt.

However, in most circumstances getting in to the construction industry as a contractor or plumber does not need a very specialized expertise, tools, skills and an ample experience to handle some plumbing needs like a busted pipe, an overflowing sink. Being handy will come in to salvage a minor plumbing situation instead, of using a real plumber.

There are some easy plumbing repairs that do not necessarily require the frequent and frequent call of the plumber.

This is about the easiest plumbing job that can be done by replacing a new fitting shower head by just screwing out the old shower head and screwing in the new one to the shower arm.

However when the old shower head is removed the thread is cleaned from the shower arm and the Teflon tape is wrapped around it before the new shower head is fixed up.

It’s that simple but instructions on the new fitting shower head must be followed.

Sometimes the shower might be blocked out by little dirt and simply needs unscrewing and rinsing that’s all, the shower is back.

A slow draining sink comes in handy as one of the foremost plumbing repairs that could easily be done without the help of the plumber anytime by anyone at home.

Simply put, the major cause of a slow draining sink is caused by debris and hairs collected over a period of time by the stop up in the sink. To get the sink flowing smoothly again a simple plumbing tool is used called zip-it to clean out the rubbish from the drain preventing the smooth flow. Also it could also be done by just removing the pop up and properly cleaning it.

The pop up could be cleaned and drained by using a plier to unscrew or using the mere hands since they are held up by nuts and screws. After the screws holding the pop up is removed the drain is easily cleaned and reinstalled thereafter.

This is a common problem experienced in most homes that could be easily repaired by you.

The tank for the toilet is built so there will be no need for a regular bucket.

· While storing water the tank contains a filler valve that controls inflow of water into tank that could lead to a running water out of the tank if the overflow tube doesn’t work right and could be replaced,

· The toilet flapper is a kind of flap valve that is connected to a chain been hanged down from the flush handle might be faulty and easily replaced.

Sighting a still water in the bathtub is very irritating and really doesn’t require you called the plumber. There is no fun in draining a clogged bath tub because this is where a lot more hairs and junk goes through.

Another method is using the baking soda and white vinegar method by pouring one half cup of baking soda and same quantity for the vinegar, plug in drain snake allowing the mixture to bubble for thirty minutes after which hot water is poured down to clear the clogged drain pipe.

5. That leaky kitchen and toilet faucet

In this plumbing situation the faucet can be repaired depending on the given type. Being aware of the basic types of faucet will largely assist in the separating apart and fixing of the leaky faucet in almost an hour even if looks daunting.

To begin the repair of the faucet a close observation is done to detect where the water is coming from. If the leaks come from the base of the faucet it’s a different repair all together than a drip from the end of the spout.

As the faucet is taken apart close attention is taken on where each part is followed and arranged. Afterwards, soak these parts into vinegar to loose mineral deposits.

The old parts of the faucets could be taken to the plumbing shop to easily get new replacements.

Home : How to get rid of old furniture and appliances?...