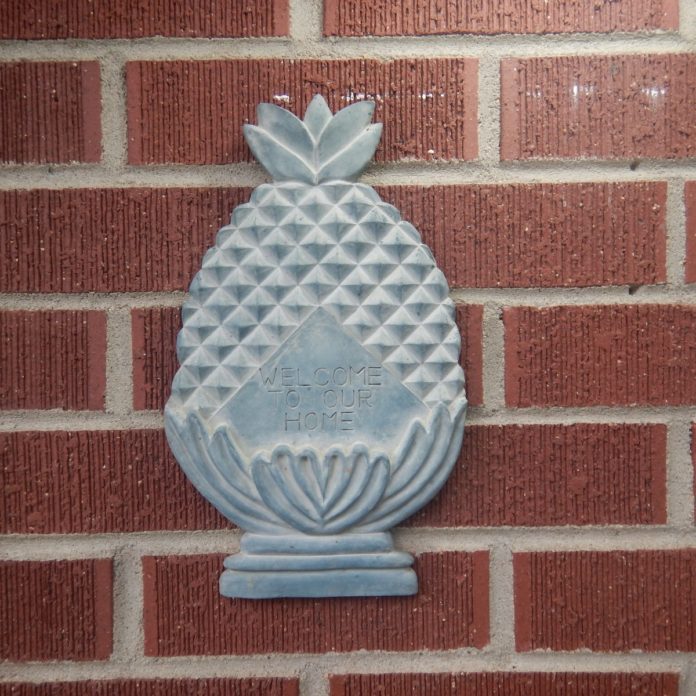 Home : Get the HELL Off my Doorstep – Julia E Hubbel – Medium

Ever since Columbus was first introduced to the pineapple back in 1492, it has enjoyed a great deal of popularity. Not an easy fruit to grow, and much less so to transport and preserve, the fruit evolved over time into a symbol of graciousness and hospitality. After Europeans discovered the fruit, they also found out just how hard it was to cultivate. Over time, the precious fruit, when displayed at a big social event, was a signal that the hosts had spared no expense to make folks welcomed.(http://chefsblade.monster.com/news/articles/884-the-story-of-the-pineapple-a-symbol-of-hospitality)

The previous owners of this nice ranch house in Lakewood, Colorado were very welcoming people. Hence, this big pineapple plaque on my door. The problem is that I despise solicitors, and there are plenty in my neighborhood. It somehow doesn’t track to have this uber-welcome in your face next to a sign that basically says, Get the F — k off my lawn.

Sigh. You see my problem.

When summer begins this nice, friendly neighborhood gets inundated with folks who are selling everything from grossly-overpriced candy bars to a new roof (OH but we just had a hailstorm) to wasp removal.

Guy the other day started out nice enough. It was late afternoon, full sun. I was eating dinner (mind you I dine around 5 pm) and the doorbell rang. The uniformed man began his pitch by saying (and I love this, it’s become de rigeur for solicitors to use this pitch):

“Your neighbors Bill and Susan (and I’m thinking, who the hell are they?) are using us along with others (oh the ubiquitous but foggy “others”) to remove their yellow jackets.” (This of course is meant to validate their presence on the street and my doorstep where I am now standing with a Chinese noodle stuck to my chin).

“Yellow jackets are a REAL PROBLEM right now. Shall we take a look at your house?”

“I know I have yellow jackets,” I retorted, sending the noodle flying. (Great compost, I thought.) “I’ll take care of it.”

Guy’s eyes get wide. He comes in for the kill.

“Have you ever been stung by a yellow jacket?” He leaned in for dramatic effect. He’s going for the terrified old lady who leaps on a stool when a mouse runs across the room.

“You think I’m fucking scared of a goddamned yellow jacket?”

A few more pieces of noodle go flying, which somewhat undermine the dramatic effect. It’s hard to envision a woman who can’t control her noodles winning an argument with a Great White.

He took a step back, reassessing his approach. You’d damn well better.

My six-foot, 220-lb boyfriend is scared of bees. A dear friend of mine is terrified of miller moths (http://articles.extension.org/pages/41626/what-are-miller-moths-where-do-they-come-from-and-what-is-the-best-way-to-control-their-presence-ins) which are annoying, but harmless. We all have our things. As someone who grew up in Central Florida with an evil big brother, I have at one time or another had any or all of these things either dropped down my shirt, the back of my pants, hidden in my underwear drawer or walked into an unfortunate encounter because I wasn’t being mindful. You survive. You learn. AND you learn not to be afraid. Respectful, but not terrified.

You cannot do the things I do in remote places of the world and be terrified of these kinds of things. You just can’t. You’d be frozen in place. I wear gaiters, gloves, headgear, whatever is necessary. And still sometimes I get nailed. You. Get. Over. It.

Stuff that bites, stings, snaps, grabs…. Those don’t bother me. Stupid, manipulative salespeople do. You show me a spider like the ones above or below and I will walk right up to it, stare at it, appreciate its beauty and take a photo. You could put ten tarantulas on my face and I’d be perfectly comfortable. Some people would die of fear. They make great pets.

You show me an annoying salesman who is causing my Chinese dinner to go cold and I will find a broom. One with a pineapple emblem on it for that matter.

I’d far rather live with the yellow jackets than have to put up with misleading sales pitches and constant interruptions to my household.

Once some kid came by and nailed me for a subscription. That damned magazine ended up costing me sixty bucks, took nearly six months to begin, and caused me to seriously rethink any kid who shows up armed with a sales pitch. I don’t buy Girl Scout cookies either (read the ingredients, for one thing). They don’t taste like they used to and I am in no mood to have to run off the extra calories. When my local Girl Scout troop starts selling healthy options, I’m in, baby. But don’t show up at my door with Thin Mints.

The race for Colorado governor is crowded and already butt-ugly. I have already voted in the primary, but that doesn’t stop people from hijacking my texts and haranguing me to vote. You don’t want to read my responses. It’s bad enough that I have to field up to twenty or more calls every single day (you read that right) from Mumbai-based scammers who insist that my non-taxable VA disability benefit has caused me to owe the Fed millions and I’m about to get hauled off to jail. Fifteen to twenty calls every single day from the same scam artists telling me that my excellent credit qualifies me for a zero- interest deal.

As we wind the summer down and the political races head towards November, my bucolic neighborhood is going to get canvassed by cretins getting out the vote. A great many of my neighbors are elderly, but they’re also not stupid. My vote was decided the moment the orange pumpkin got elected. Certain local folks have already lost my vote because of vicious, negative ads.

What I resent is the assumption that we can’t see through the pitches. Those of us who have been around long enough can remember mothers who ended up purchasing brush sets, encyclopedias and vacuum cleaners because they didn’t want to be rude.

I don’t suffer from that problem.

The Cost of Scammers

Many scammers are successful because they target the elderly (among others) who aren’t always in control of their emotions or their capacities. Here’s what it has cost (https://www.consumer.ftc.gov/blog/2018/03/top-frauds-2017). Overall it was about $9.5 billion. Interestingly, Millennials lost even more than the elderly (who knew?) because they tend to be far more transparent and possibly, a lot more naive about their online presence (https://www.bbb.org/globalassets/shared/media/truth-about-scams/bbb-scamprogram-whitepaper-08-digital-0630.pdf).

We are under siege.

Being ex-military, I don’t have a problem protecting my space, my quality of life, and everything I have worked hard for- including my privacy.

While I respect the need for folks to make a living, my house is a sacred space. We Americans are bombarded with between 4000–10,000 ad messages every single day. It is harder and harder to find a place of peace. So when I work my butt off to create a beautiful private space, invasions such as these mindless robo-calls, misleading sales people and scammers, the moment you start talking to me, you have begun a war you’re going to lose.

Not only that, it’s become a sport. Many of us have watched the YouTube video of a young man scamming an Indian scammer. The scammer erupted in fury when he realized he had just spent half an hour believing he had reeled in a whale and the young man had him by the short and curlies. It’s hilarious. So is every time I get that classic IRS call and I ask, in a very cheery voice,

“How’s the weather in Mumbai?”

The FTC has no claws when it comes to international scammers. Because phone numbers can be changed and there are untold billions of versions of them, you can block, as I do, twenty to forty calls a day. That won’t stop them. So, when I feel like letting off a little steam, I will lead them on and unload.

You don’t want to be on the receiving end. I have an entire library of Shakespearean insults I love to hurl. They are ever so much better than lowly cursing, because the caller has to listen to understand.

When they do, it’s righteous.

Unless I buy myself an isolated island (my VA benefit won’t quite cover that I’m afraid) I am fair game. But if you come knocking, you’d better be prepared. Not only will you be wiping wet noodles off your uniform, you may also find your face full of broom.

The one with the pineapple emblem, that is.

Welcome to my house.

DIY Projects Video: How to Kill Termites Do it Yourself and...