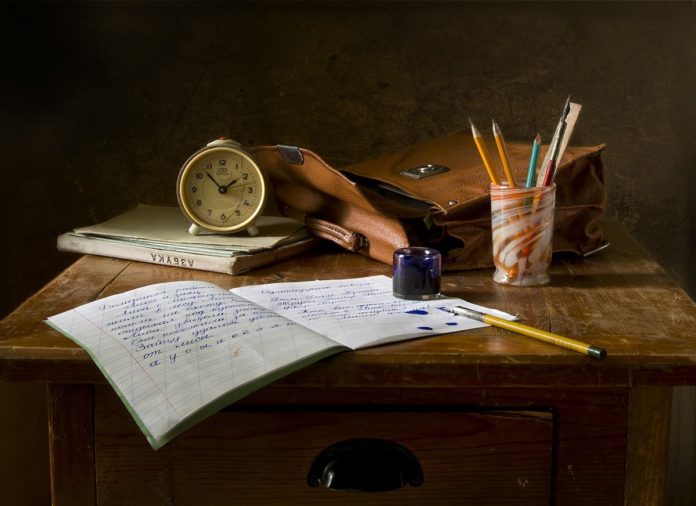 I have a study facing the front of our one story house. I really like it. It’s not big, but has wood floors, a nice book case, a real nice chair, and a closet.

I have a a long desk against the wall where I have my computer (a docked MacBook Pro), dual monitors and a Varidesk standup desk which I got 2 years ago and love.

I also have a ham radio set on the desk, which I use in bursts. It’s probably been a year since I really touched it — but it looks cool.

I also go in bursts drawing and painting, so have lots of art supplies and paintings laying around that I did. I have all this pretty much stuffed in the study closet now.

I have an acoustic guitar that I pull out sometimes (like today I did after a long while). I have a Fender Stratocaster also, but in another room. I used to play guitar a whole lot, including in a band in my younger days. That was quite a while back though.

I have a Raspberry Pi electronic kit also that I play around with, as well as an arduino and other electronics parts. This is also a pretty on and off type hobby (no pun intended).

I also have a couple of fake cactus and grass plants which look good and are much easier to take care of than the real ones I used to have — and had to throw out.

So things were moving blissfully along.

Then earlier today my wife announced that she wanted to ‘help me’ clean my study.

I hemmed and hawed. I mean I know she was going to want me to throw a bunch of stuff away. I hate throwing things away.

Mind you, I am not a hoarder or anything — but I am more on the sentimental side and tend to want to keep things in case I ever need them. My wife is the opposite.

First thing she opens the cabinet of my bookcase which is full of stuff. She first pulls out a bunch of notebooks that are a year or two old.

That is another thing I do, (and also in bursts) — I write down stuff. I write down daily occurrences, and thoughts, and even complaints and things I stress over just to get them off my mind.

I see her there picking through them and asking which ones she can throw away. She is reading some just to see, with a blank expression — and I cannot even remember if it’s ok to let her read what I wrote or not.

I glance at some of them and finally ended up giving the ok to trash about half of them.

One thing that annoys me about my writing habit is I tend to start a notebook and then quit after a few pages and then somehow pick up in another one. So it gets all mixed up. I am not sure how that happens. Maybe I cannot find the notebook I last wrote in or flat out forgot about it. But I guess I never was really writing that stuff to save long term.

Next she finds a camera. That is another thing I like to do is take pictures. I have not thought about a dedicated camera in a long time though, I take pictures with my iPhone now.

But when I saw the small Canon Powershot I clearly remembered how high tech it seemed then and convenient. It has a rechargable battery that lasts a long time.

Now as I said I use my iPhone. And yes I can say do not miss needing to bring that around with me also to take pictures, and always have my phone with me. But still I was intrigued.

She asked if she can throw the camera away. I ended up instead putting the battery on the recharger with the excuse that I just wanted to see if there were any pictures on it.

I then looked at the megapixel on it to see if it would take better pictures than my iPhone, but the camera has 8 Megapixels, my iPhone 7 has 13. So after it recharges will see if I will get rid of it.

This is the Canon camera (took picture with my iPhone 7).

Next she finds 3 spindles of computer DVDs. It’s been a while since I saw those and was looking through them. Sims 2, some outdated work files, other old programs. I remembered during the last study “purge” (which did not seem not that long ago), we found a couple of boxes of floppy disks with various programs I had no way to run. Now these DVDs seemed the same way to me. My Macbook Pro does not even take DVDs anymore. So although it seemed outragious, I agreed to throw them all away.

Then she started seeing some books.

Now I used to have tons of books and magazines that I kept, but at her urging I had ended up getting rid of almost all of them. I don’t even miss them much, since I do all my reading now on a Kindle which I love.

One regret I did have was all the Byte magazines that I threw away — ones that had articles of PCs even back to the IBM PC AT (like 10 MHZ and 40 MB hard drive). But I agree they did take too much room.

Anyway, I had whittled my physical books down through the years pretty much to the absolute minimum. I mean for example, I was not throwing out my 7 Habits of Highly Successful People book.

So this time, when she started calling them out one by one asking if I could throw it away, I said no to all of them.

Well all except one which was on wireless sensors that I had brought to the pool one time and it looked water stained (moral — never bring a nice paperback text to a swimming pool).

Earlier I said I had a dual monitor system. Well recently I had bought a nice Dell 27 inch monitor to replace an older smaller monitor. But I still had the older one sitting besides the two I use. So I had three in a row on my desk, one of which was not hooked up.I told my wife I could throw away that older one since it had no HDMI and basically did not need.

So I felt proud about letting it go, and gloated and said — see now I am going from three to two monitors! But then my wife pointed out that, no, I was going from four to three. She was right really, since on the side of my computer monitors I also have a 32 inch Samsung TV mounted over my desk.

That is another thing I use my study for by the way. A few times a week I will watch something on Netflix from my comfortable chair.

Then she hit the closet. One side of the closet is a shelf that consists of some of my items and some of hers. On the other side is the shelf with all my art stuff. Canvases, sketch pads, paintings, drawings, paints, brushes. It also has a big box of various cables and power supplies and on the top shelp a few years of Artists Magazines that I used to subscribe to.

I was worried that I would need to have to shift through all that art stuff. But while I was distracted looking at something else, my wife was poking and picking up some stuff in the closet, mainly on the side of where both of our stuff was.

Then before I knew it she shut the closet door and the cabinet in the bookshelf and walked out the room. She declared the room done and seemed pleased. It did in fact look good.

She then pointed me to all the bags of ‘trash’, which I hauled off to the garbage. It was over — until next time.

DIY Crafts : How to Make a DIY Foaming Mason...