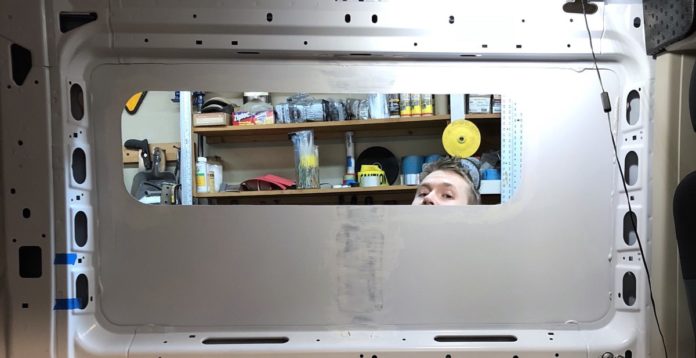 We’ve been in Powhatan VA staying with Spencer’s parents for about two weeks now, and we’re finally starting to see some results in the Merry Weather. Because we’re both working full time remotely, it took us a while to work out the schedule for van projects but with two big building weekends behind us, we’ve now gotten into the swing of things with visible progress.

The very first step was to squeeeeeeeze the van into Dave’s shop — a tight fit, but we managed to get it in there! Definitely not much room for other things, but it’s been SO nice (as temperatures dipped down to 11 degrees…) to have the wood stove heat while we’ve been slowly puzzling over interior questions.

The most horrifying task so far was cutting the hole for the new window on the driver side of the van. We ordered this window from Motion Window— the first step was to make a template to trace onto the wall of the van. Why it doesn’t come with one beats me! But we managed to get a fairly accurate template cut out and drawn onto the van. Spencer jigsawed the hole with serious accuracy and concentration — it felt very scary to be poking such a gigantic hole in the side of a vehicle, but it went really well. It’s not the last hole we’ll have to cut in the exterior of the van, and hopefully the rest will go this smoothly. We’ll be installing the window this week and will share final pictures once it’s in!

One of our first big tasks was insulating the van. We used 4 sheets of 1″ rigid poly iso to insulate the walls and ceiling. We cut all the panels to size with a box cutter, which took quite a bit of back-and-forthing to accommodate the van’s funky corners, and then began to glue them into place using Great Stuff gap filler foam. This worked well to stick them in place and then it expanded slightly after we stuck the panels to the wall, creating a tiny air gap which will help the insulating layer do it’s job. All in, this part took us a solid Saturday to get it all in. We have a few more insulating tasks ahead — adding 1″ Thinsulate inside the ribs and 1/4″ closed cell foam to any areas where the wall will be tight to the metal surface.

I think the most exciting accomplishment was installing the swivel seat. We were expecting this to be a very arduous task, based on reading other van conversion blogs, but Dave and Spencer got the passenger seat removed, installed the new swivel adapter, and reinstalled the seat in a record-breaking 45 minutes! It was such a satisfying success, and the impact on the experience of the van was HUGE. The whole interior feels much more open and we immediately started talking about installing a driver side swivel. One step at a time though, they’re pretty pricey — so we’ll test drive this one first for a while!

My favorite part this week has been assembling the furniture framing. We wanted a system that was strong and rigid, yet lightweight, and aluminum met both of those needs. After doing some research, we opted for 1″ aluminum square stock and connectors from ESTO. In getting the components quoted, I realized it would only be $30 extra to get the pieces cut to length, so we went for that upgrade. This meant we had to have the model pretty well resolved before ordering, which was nerve wracking but fun. This week I assembled all the pieces with a rubber mallet and we now have 3 furniture frames sitting in the van, awaiting their cabinetry inserts!

Next up: working out the cabinet hardware, the floor mounting strategy for the furniture modules and spec’ing the electrical system!

DIY Projects Video: Do It Yourself – Bokashi Setup