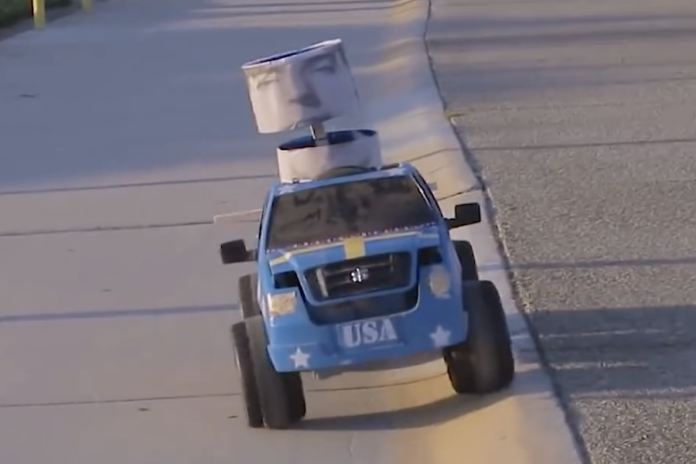 Have you ever considered what form you would take if you were a car? Perhaps you’d picture yourself as a Lamborghini, a rugged pickup truck, or even Optimus Prime, but William Osman had a different vision. This vision was, interestingly enough, not for a car based on himself, but one for fellow YouTuber MrBeast.

The “Beastized” vehicle is in fact a remote-controlled Power Wheels truck, which was obtained and heavily modified in a pair of separate Osman videos. To give it a MrBeast theme, a printout of his face is wrapped around a bucket cut into two pieces. One side is pushed up and down by a drill motor in a reciprocating setup, making the face appear to separate into two when talking, similar to something you may have seen on South Park.

Along with a new head, Osman put in some work to ensure the truck is able to actually still drive, which he accomplished even though one of the brushless motors powering it was shot. With the car/head setup somewhat working, along with a sound system that invites people to “subscribe to PewDiePie,” Osman and company took it to the streets. As you might suspect, reactions were somewhat mixed, though it seems to have survived its journey among the public and people-sized cars!

Home : The Importance of Renovating your Home – Altitude Builders...

Life Hacks Ideas: 16 SECRETS THAT WILL HELP YOU BECOME A...

DIY Furniture : Looking for arbor or trellis ideas for...