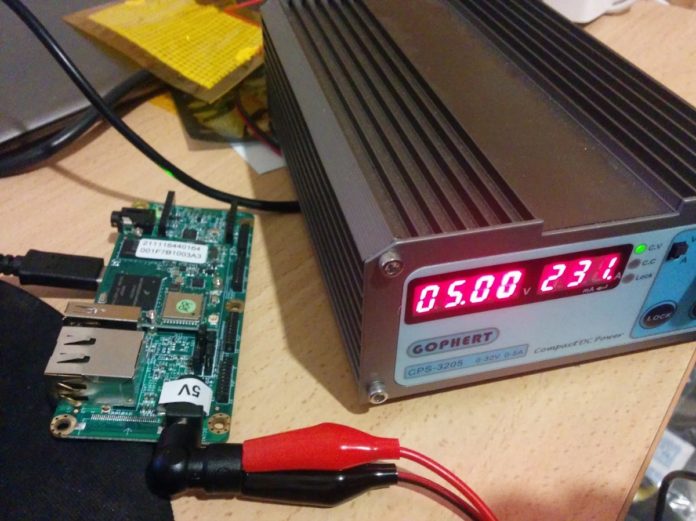 When I show my projects to people, I often get asked what kind of equipment I have in my lab, and how I use it for my projects. So here is a brief summary:

It provides me with the power I need for my projects. It goes up to 5A and 32V, and also has a digital display where I can see how much current the project is drawing from the supply:

Combines a Soldering Iron and Hot Air Gun in one product. For less than $100 USD, it answers all my soldering needs. I can use it to solder large through-hole components, as well as very fine-pitch components (like the nRF52832 chip I replaced in a broken Espruino board).

I use them all around the place, not just for electronics. For instance, if I have to pick a small screw or nut, and sometimes even to remove pests from our plants:

It holds stuff for me while I’m soldering or using the hot air gun. It also had a built-in LED light and a magnifying glass, though I don’t use them very often.

The Raspberry has been useful in many of my projects, such as the Angular-Simon game, the bank’s website man-in-the-middle attack proof of concept, and even when I reverse engineered a smart WiFi Light bulb.

In addition, many electronic boards and components that I order come with some sample code, and it is usually either Raspberry Pi or Arduino code. For instance, the Waveshare E-Paper display module I used in the Real-Life version of the Chrome T-Rex Game came with some Raspberry Pi code, which I later ported to run on Espruino:

Just like the Raspberry Pi, many components that I use have libraries for Arduino. It is very handy to have one or two around, so I can quickly get started with new components.

I use it to program ARM-based CPUs such as the nRF52832, and also for reverse engineering tasks, like when I extracted the firmware from the Magic Blue Smart Light Bulb.

I have a bunch of LEDs, these are very useful just as “debug prints” in hardware. I also have a bunch of resistors, capacitors, etc, some breadboards, a bunch of hookup wire spools, a wire stripper tool, and many many jumper wires:

I have a Creality CR-20 printer, and I use it all the time to print 3d parts and enclosures for my projects, including the Purple Eye Dancing Robot, Trumpet Playing Robots and many others..

I mainly use OpenSCAD for more complex designs, such as the fingers mechanism for the trumpet playing robot:

The printer is also very useful for organizing my stuff, for instance — my USB cables:

As some point, I even added plotting capabilities to my printer (it was as simple as printing a single part, and tinkering with the software):

It drills. It fastens screws. And screws are very useful for attaching things like the drum of my DiY Rotary Rock Tumbler:

I have a set of drills ranging from 2mm up to 10mm, and a bunch of screws, mainly M3 and M4 screws with matching nuts and washers.

Having a drill is really useful when prototyping 3D parts, as I can drill holes in the draft parts instead of having to print them again with the holes.

I can’t stress enough how important it is to wear it when dealing with things that can possibly get into your eyes and hurt them. Like onions:

So There You Have It!

As you have seen, my equipment is mainly geared towards working with electronics and 3D-printing, and these two have a large part in my projects. What about your setup? I’d love to learn what tools other use when making stuff. Please share!

DIY Crafts : If you're getting tired of grilling and...

DIY Furniture : Give your child’s teacher a funny and...

Home Improvement : Things You Didn’t Know A Carpenter Would Build...

DIY Furniture : How to Refresh Old Wood with One...