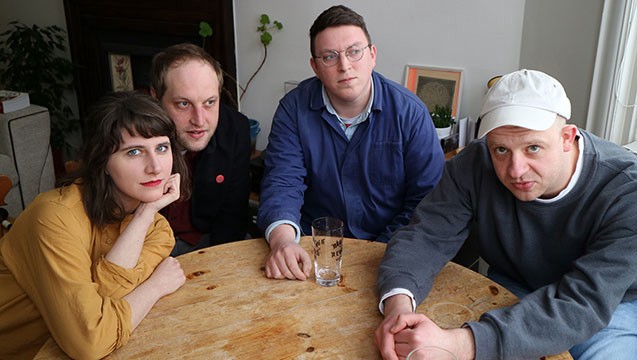 Vital Idles are a rowdy post-punk quartet who are projecting wonky pop contortions right from the heart of Glasgow’s DIY scene.

Guitarist Ruari MacLean has also had previous form with Golden Grrrls and the Rose McDowall Band.

Since finding a home at Upset the Rhythm, the fourpiece have conjured an ace debut LP in Left Hand, which landed last Friday (1 June) amid a flurry of one-chord whimsy.

Here, Ruari spills the beans on his first ever gig, his uncontrollable habit of playing ‘boring blues sad solos’ and his recent Creedence Clearwater Revival phase.

What was the first song you developed an obsession for?

Moonlight Shadow by Mike Oldfield. I have a really vivid early memory of repeatedly climbing up the back of an arm chair to get to the stereo to rewind it when the guitar solo came in because I didn’t like that bit. I would have been about three or four at this point.

What’s the first gig you went to?

Well I grew up on an island off the Scottish coast, village of 200 people, super rural, so there wasn’t much of a scene… And with it being an island there wasn’t really any possibility for getting to a town where touring bands would play and then travelling home afterwards. In saying that, you used to sometimes get folk or jazz musicians visiting because they used to have a folk festival every year and so my first gig was seeing Bert Jansch in the village where I grew up. Which sounds impressive, but I was like 10 and was only there cos my dad was like, ‘You won’t get this but you need to see it.’ In terms of being a bit older and going to shows in Glasgow by myself… some awful NME band I’m sure. The Vines maybe?

What’s the first instrument you ever got hold of?

I took piano and guitar lessons as a kid but hated them and quit as soon as I was allowed to. It was only when we ended up with an old drum kit in our house that I started playing that and teaching myself when I was about 14. So drums, I would say, are the instrument that started me playing.

What is your worst musical habit?

My god… too many to mention. Does everyone not get sick of the way they play their instrument? Maybe not so much in Vital Idles, but in another band I try to play lead guitar sometimes and I listen back to iphone recordings we make of song ideas we’re working on at practice and I often sound like a boring blues dad. Let’s say boring blues dad solos.

What’s the best piece of musical advice you’ve ever been given?

You know, I don’t think anyone has ever really given me any advice in that sense. Not explicitly anyway. I kinda think in the type of scene of musicians that we operate in it would be considered bad form… haha! I advised MYSELF to never sing again having previously done so, that was some excellent advice.

Where do you discover new music?

Erm… various places I guess. Friends recommending stuff, checking in with record labels I like, there’s a few shows on NTS radio that I listen to that are great, mailouts from record shops, stuff like that. Again, much like a dad, I like reading about music history so just reading about bands, who they toured with, the scene they operated in, that’s pretty good for finding stuff to check out.

Obvious one, but probably the Barrowlands in Glasgow. I’ve been lucky enough to play there three times and it feels crazy every time, even if no one in the crowd is bothering to pay attention to you haha!

Who is your current favourite band/artist?

Oooohhh… I dunno, I’ve been listening to various things recently. There’s a band/project called Itchy Bugger from Berlin that I like, I think it’s someone from the band Diat. I recently discovered a reissue/compilation from last year by a musician called Geoffery Landers that’s great.

My friend David recently introduced me to a band called Glorious Din, a post-punk band from the mid-eighties based in San Francisco. Both of their records are amazing. In terms of current Glasgow bands, my friend Edwin and I recently recorded a really new band some friends are doing called Mystic Rock, who are brilliant. Current Affairs are another amazing band. Edwin makes music as Irma Vep and continues to write really incredible songs. I’ve also been going through a Creedence Clearwater Revival faze recently and been loving it!

What inspirations outside of music impact your songwriting?

What track of yours best represents your sound?

I’d say Solid States. As a band we like to keep moving, trying not to stick to one style or formula. We wrote that song about a week before we recorded the record so in terms of what we’re doing at the moment that’s probably most representative.

What’s next for you?

Touring the UK in July, maybe some other shows later in the year, maybe some more recording at some point…. That’s very vague but we never really have much of a plan… haha!

DIY Furniture : The coolest thing you see all day!...