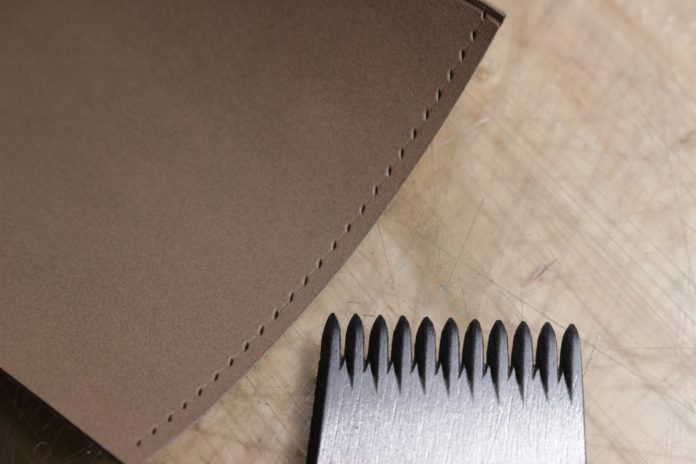 There will be a harmony of tools and materials for good stitiching.

For example, if you stitch thick thread to the thin needle or thin hole, it is not match each other and stitching can be crushed.

So let’s look at this harmony now.

The followings tools are involved.

First, the biggest influence on stitching is the griff which is to make a hole.

Griff can be divided into European style and Japanese style.

Shape of hole in European style is long and same in diagonal and diagonal angle is deep, giving a cool and fancy feeling when stitching.

On the other hand, shape of hole in Japanese style is diamond, and it is shorter and its angle is relatively lowered, giving a slightly elegant and virtuous feeling.

The weakenss of European style is that such deep diagonal line can make stitching more complicated.

For Japanese style, stitching work may be difficult due to the small stitching hole.

The most famous one in European style is Vergez Blanchard griff made in France.

For Japanses style, I recommend the Iwataya.

Japanese calls griff as MockTa maybe because the pressed shape looks like an almond that is like a human eye.

Nowadays, leather crafts are active in Korea, so we produce many tools. Even some griffs made in Korea are popular in overseas. Since Japan has a history of leather craft market that has been formed for a long time, there are many more products than Korea.

In addition to the difference of shape of hole in European and Japanese style, there are also differences for working.

And, of course, stitching interval of each manufacturer is difference. So if you make the pattern according to each stitching, you can make more sophisticated work.

And even if it has similar interval, the size of hole in European style is bigger than Japanese style. So you can choose thread and needle for it.

This is griff I have now.

From the left to right, there are Vergez Blanchard №10, 9, 8

For Vergez Blanchard, I usually use №10 and №9 for the small goods and №8 for bags.

If there is a set of №7 and №6, works will be more efficient.

I only purchased Hiuchiya and didn’t use it for my crafts. I think it is because I like the shape of Iwataya the most. I will use it for my work next time.

Followings photo is a set of Vergez Blanchard.

For reference, it is said that MockTa is divided according to the number of blades kept in the space called one chon in Japan.

In other words, №11 means that it has a total 11 blades in one chon width.

It is said that the interval of the blade is about 0.3 milimeters.

So Vergez Blanchard is №10, Hiuchiya and Iwataya is №11, and Koyshin Elle is 3.0, having similar blade interval.

For me, I don’t make a hole on the leather at once by hitting griff hardly.

I use griff to do griffing and again use diamond shape awl to make a hole according to the griff hole.

If you use a diamond shape awl and griffing together, it is recommend using an awl that fits with griff.

Relatively wide balde is good for Vergez Blanchard. For Iwataya, it is better to have a narrow blade since the hole is relatively small.

I use a variety of awls as in the photo above.

In some cases, I use wider or longer awls according to a certain situation. And I polish the blade according to it.

And sometimes I made an awl like a photo.

I sometimes put needle used in the machine to a cork.

The advantage of this tool is that I can make a hole same as the one in the machine stitching and do the hand stitching. This makes the difference between machine and handstitching less.

In addition, I think that the hole is made clean, fine and precisely. So I’m very satisfied about it.

You can try it, too.

Let’s loot at the thread now.

There are natural thread and chemical thread.

There are several disadvantages in linen thread compared to chemical thread. Its thickness is not constant, its thickenss is not made thinner and its color is less uniform. And it is easily come untied by friction. So it is recommended to coat the tread with the wax when you work for easily works.

But this wax is easily dusted, making stitching looks not neat.

Despite of these disadvantages, there are linen’s own advantages.

It can make natural feeling.

Even though its thickness is not uniform, color is not clear and stitching is uneven, all of these can be seen as natural.

Because the sewing is a sensitivity.

Linen thread also has its own advantages.

It has much stronger tensile force (force that can’t be broken when pulled on both sides) than polyester thread. Long before, Hermes has used this linen thread to make saddle stitching when making horse supplies.

Today, people use linen thread for flavor and sensibility rather than durability in the leather craft.

I don’t actually use linen thread a lot.

I’ve heard that it is cool when I started the craft and bought some of them. But I still have since I didn’t use it a lot.

When I see the natural and soft color of linen stitching on the leather, I can understand why people use this thread. But I don’t really want to use it like that. It is probably because of the fact that workability is relatively lower than polyester thread.

Lin Cable made in France is famous linen thread. Perhaps it became more famous since it was supplied to H Company.

There are several varieties of linen thread of Lin Cable.

There are thinner linen threads and some threads are synthesized with polyester to take the advantage of polyester and linen.

Polyester thread is often used among the synthetic thread.

This thread is different in thickness depending on how many times it is twisted.

There are many different types and color of various manufacturers compared to the natural thread.

MBT thread is bonded to a common thread so that it is not untied easily.

Ironically, this thread was originally developed for use in the machine. I think they wouldn’t have known it at first when launching a product that people could use it more for hand stitching.

The reason why I use this tread for hand stitching is because thread is less twisted due to the bonding, it is not untied from neddle and gives a firm feeling when stitching. And its color is very clear and diverse.

Gloss of thread, which is an advantage of polyester thread, is excellent.

I once used this thread on the machine.

It was quite difficult for me to set tension with lower thread because of this bonding.

So I usually use Mara, which is one of product in German Guterman, and it is easy to set tension.

Thread thickenss of Guterman Mara is much more diverse than the natural thread. For me, 30 is suitable. As the number incrases, the thread is thinner.

Serafil, which is one level lower than Guterman, is also used a lot.

This thread is also developed for the machine, but it is used for hand stitching a lot in Korea.

The photo is shows MBT tread of Vinimo Company.

I use №8 when I use Vergez Blanchard as griff and №20 when I use Iwataya griff.

You can’t see any big differences with the above photo. It is just Vinimo.

Its colors are more diverse than MBT.

I don’t actually prefer it because there are relatively many twists during hand stitching.

But, the color seems to be much more varied.

I think this thread should be used for the machine. In fact, the famous Japanese craftman are using this thread to create wonderful works.

If I have a chance, I will try theses threads on the machine.

The photo is shows MBT №5 which is quite thick.

This photo shows Italian thread. I once used it for test before I use Guterman. But I don’t acutally know its merit, so I just keep them.

The photo shows Guterman thread which is used on the machine.

Guterman has various thicknesses than Vinimo.

I also have Sefafil thread in my workroom.

I used it early, but now MBT is using.

The photo shows linen thread. I just used once or twice, and there are some I didn’t use at all.

I usually use two types of needle, thick one and thin one according to the situation.

I use John James Needle №4 for Vergez Blanchard and use thinner system needle for Iwataya.

There are various types of needles of various manufacturers in the machine like Griff.

I like to use LBR type needle which is used by H Company. If I use this, I can make diagonal line as if I use Vergez Blanchard griff when hand stitching. There is also LR type. This makes stitching like Japanses griff.

Finally, I will show you various stitching. Enjoy this.

What stitching stimulates your emotions?

DIY Crafts : If you DREAD cleaning and roasting pumpkin...

Life Hacks Ideas: 3 Hacks To Get You ORGANIZED | LIFE...