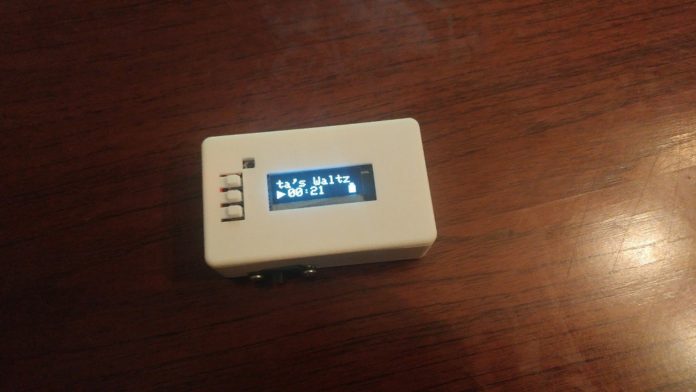 One-person shows are impressive for a number of reasons, not the least of which is that the person has to handle the non-performance logistics of the show on their own. Sure, a venue employee can probably push the play button on an iPod when the show starts, but if the performance requires timed music or sound effects, the performer is on their own. To make it as easy as possible for a person to handle their own audio, Dan Cogliano has created an Arduino music player with a remote designed specifically for one-person shows.

The player is made up of two devices that communicate with each other via packet radio, which has a much longer range than something like Bluetooth. One device connects to the venue’s sound system, and has an SD card for storing music or sound effects. The other device is a battery-powered handheld remote that the performer can use to select and play their desired file, either by feel or by looking at the screen.

Both devices are built on Arduino-compatible Adafruit Feather M0 RFM69 Packet Radio boards, which can operate on 868MHz or 915MHz frequencies. When a button is pressed on the remote unit, a signal is sent to the music server unit, which then determines what to do. It plays, skips, or stops the music — whatever is requested — and then sends data about the current track back to the remote where it’s shown on a small OLED display. Cogliano still has a few bugs to work out, but reports that it’s already functional, which is great news for performers.

DIY Projects Video: How I built the indoor pond

DIY Projects Video: 5 Minute Crafts To Do When You’re Bored...

DIY Furniture : Create your own Fresh Cedar Garland. Its...

DIY Crafts : Halloween Time at Disneyland | Are you...

DIY Furniture : Painting furniture with Velvet Finishes is so...