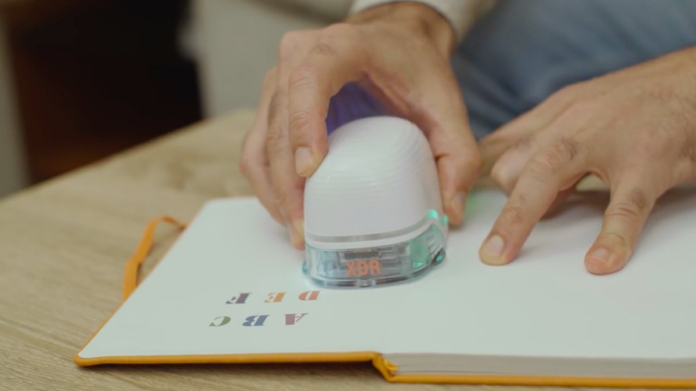 DIY : They Set out to Improve Rubber Stamps — This Futuristic Handheld Printer Does so Much More

“My handwriting sucks, very much,” says Alex Breton. When he’s using the PrintBrush XDR, live on Kickstarter now, that doesn’t matter. His small handheld printer can apply lettering and imagery — in exact hex-code color-matching — to paper, whiteboards, fabrics, or just about anything else in your home or office.

Breton, now in his 50s, has been an inventor since he was 17. He started out making mechanical bike locks and specialty multi-use pens, which in 2000 attracted the attention of a rubber stamp company hoping to develop new digital products.

Breton started plugging away at the assignment — and secured three patents — but the company balked at the material costs for his rough, slow, early prototype. So he set off on what would become a nearly 20-year, career-defining journey. He’s since raised over $10 million in venture capital, shipped out more than 100,000 printers, and partnered with industry leaders like COLOP and HP Specialty Printing Systems to fine-tune the product that’s on Kickstarter now.

Breton’s first $1 million in funding, which he secured in 2001, allowed him to hire dozens of engineers and launch a product without his initial partners. “With such a large team of smart people we could very quickly put together the first prototypes that show what we call RMPT, random movement printing technology.” It’s what allows the PrintBrush to sense where it is on any surface in real time and print an image without mechanical paper feeders.

By 2006 Breton licensed his first real handheld printer product, a scrapbooking tool with preset memory cards of images, to Lexmark, a printer company, and Xyron, a sticker-maker manufacturer. He hadn’t figured out color printing yet, and the product didn’t connect to computers or phones, but it caught the interest of another rubber stamp company that was eager to form a partnership.

COLOP, the company Breton still works with now, produces several thousand stamps every day, and ships them to more than 120 countries around the world. “Stamps maybe aren’t used so much in American and European offices anymore, but there’s still a massive market for them in China, India, Russia, and the Middle East.” COLOP saw that an internet-connected digital device could significantly smooth business and bureaucratic processes, and worked with Breton to make one.

They call it the COLOP e-mark. “The e-mark opens up a new era in the stamp industry,” Breton explains. “It’s not a printer but a brand new type of stamp — a truly digital one.”

Breton also saw the e-mark’s potential beyond that commercial use. He knew that, with just a few tweaks, it could double as a more freeform consumer printer. So he used the existing e-mark platform to create the PrintBrush XDR.

The PrintBrush XDR is market-ready thanks to that creative repurposing of existing technology. Whereas similar projects have stalled out as they run into product design and manufacturing challenges, Breton is confident in his ability to deliver. He’s already prepared the production tooling, secured his component supply chain, and tested hundreds of units.

“Partnerships are very important,” says Breton. “Partners champion your project. Without the series of partners we’ve had embrace and support this technology throughout the years, it would make no sense to continue for such a long time.”

The PrintBrush XDR cracked the code for great color.

HP Specialty Printing Systems has been another one of those essential partners. Breton has worked on formal projects with the company, and found lots of technical help from friends there. But, for legal reasons, they aren’t allowed to share any information about their parent company’s proprietary color-matching technology. Nevertheless, Breton has kept tinkering away at it, and now he’s excited about what he has to offer: his team independently architected a system to print precise colors, down to exact hex codes. “We call it the magic brush. It’s a PrintBrush XDR app that can produce any color you want — you can basically use it as a spray can with 16 million colors and 342 different tip thicknesses.”

Now Breton wants to see what uses you come up with.

After decades of work, Breton is excited to open his invention to more creators and developers — one of the reward tiers is a developer kit for those who’d like to make new apps for the hardware. “The PrintBrush XDR is something that we want to put out as a consumer product for many purposes — arts and crafts, scrapbooking, educational purposes. But one of the biggest reasons we’re bringing this to the Kickstarter community is that we want to see the new uses they come up with.”

PrintBrush XDR is live on Kickstarter through January 31, 2019.

DIY Crafts : How to make a giant typography wall...

DIY Crafts : Free Printable You are the Bomb Gift...