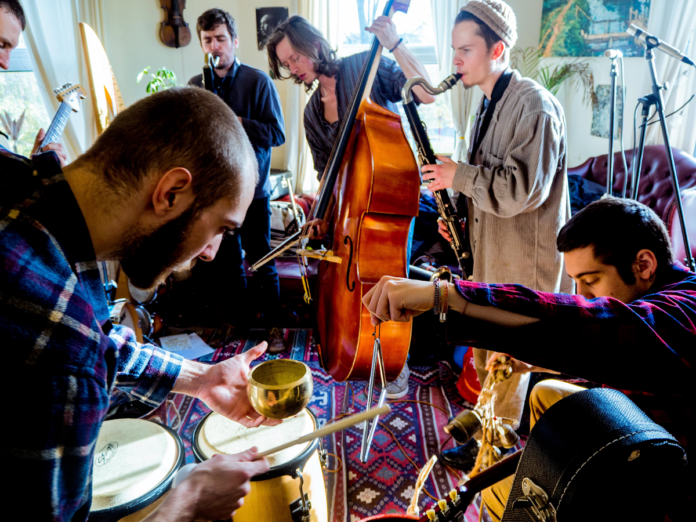 DIY : The story of a newly born record label

His slim figure, his funky earrings and his shortly cut hair betray an affiliation to punk culture. Pantelis Pilavios, simply known among friends and acquaintances as P, spends most of his time with music — doing more or less everything one can do with it. He listens to it, studies it, produces it and plays it. He might look like a punk, but his musical horizons expand from Greek folk to progressive rock, touching upon jazz, hip-hop and, not surprisingly, punk. After a meal in north-west London, we had an interesting discussion on his plans with his lifelong partner: music. These days, P is setting up Polyscope, an innovative do-it-yourself (DIY) record label, with his good friend and fellow musician Giorgos Kravvaritis.

“I play music, but I don’t like to call myself a musician or an artist,” he tells me. Worried about how I should now call him, I ask him to explain to me what he does exactly. “I participate in several different projects. Some are purely musical, other are multimedia: visual art, film, even a theatrical production. Admittedly, though, I mostly work on the music of these projects.” Lately, he has been trying to discover a new role for himself: that of the businessman.

“Five or six years ago, the idea came to me to form a record label. The processing period has been, therefore, quite long. At some point last year, I was working with my good friend and co-founder of Polyscope, Giorgos Kravvaritis, who is currently based in Leeds (note: at the time of the interview; Kravvaritis now lives in the Netherlands). We decided to found our record label, Polyscope, in order to release the products of our various projects. I hope we will also manage to release other people’s work, music records or other.” This is, more or less, the raison d’être of Polyscope.

For the time being, Polyscope consists of two people: Giorgos and Pantelis. One part in Amsterdam and the other in Athens. How does this work for the founders of Polyscope? “Distance is nowadays no longer an issue. The whole time and space continuum has shrunk so much through mass interconnectivity as a result of globalisation. The Internet is a great tool that evidently eliminates the problem of living in different cities. The most important thing is to have good and honest communication between the people involved,” says P. Having worked together on several projects during the past few years, Giorgos and Pantelis seem to have this settled.

A big question for the future of Polyscope is how their community will reach out to other talented artists that will contribute to the project. “Part of our plan is to tour in different countries and meet new people to join forces with and hopefully collaborate. Ideally, this will lead to a global network of creative people who might do music, film, animation, spoken word, anything that tries to experiment with new ideas and concepts. The goal is not to “break” new ground necessarily, but most importantly to discover, to try and expand the map.”

Intrigued by his parallelism with the map, I can’t help but ask P what he is talking about. “You see, in strategy video games, you start as a small dot on a black map. As you go on exploring this map, it becomes more colourful. This is what we want to do. We want to capture these colours and add them to the map. We would like to become an outlet for creativity, tο join dots from all over the world. Polyscope shall become a virtual meeting point for people who are looking for others to collaborate with.”

Digging into the technical aspects of Polyscope, I ask P to what extent it will be a “traditional” record company. Do they have headquarters, for example? “Our project is based on DIY recordings. These days, you can record a good sounding record in many different ways. The idea, at least for now, is not to have our own headquarters. Maybe in the future, if everything works out well and we have the funds to have a working base somewhere, we could consider it. But, at this stage, it’s out of question.”

Until then, what tricks do Polyscope aim to use to survive in a very difficult market, dominated by internet giants like Spotify and VEVO? To put it in different terms, is there living space for a small independent record label in the 21st century? “Polyscope’s goal is not to compete with these platforms. Our focus is on creating a network for musicians and artists to collaborate with and, if so desired, release material from. Inevitably, we will co-exist with these internet giants as you call them, in spite of different moral codes. Our goal is to bring creative minds together, this is where we aim to find our living space. How each one decides to present their work to the world is their own choice.”

According to P, commercial value has little to do with the actual value of a work — at least not when it comes to artistic expression. His view suggests that originality is much more important. He would like his record label to incarnate these ideals. “I want to work with people who do something that is their own, an honest statement of who they are at a given moment.” The name of the company aims exactly at this. “It is about experimenting and seeing new scopes, new perspectives: trying to actualize all the sounds or the images in your head in order to achieve a more holistic view of your own expression.”

I am tempted to ask about the origins of such ideas. “The DIY “ideology” of Polyscope comes mainly from the hardcore punk scene of Washington D.C. I got really inspired by Ian MacKaye of Fugazi, Henry Rollins of Black Flag, from Bad Religion, the Bad Brains and from others who do DIY recordings (as well as prints, zines, etc); actually, by everyone who just tries to do it — whatever it is — by themselves.” Punk might be dead, but P wants to see its legacy live on.

To make this happen, Polyscope has a lot of work to do. How far have they gone? “So far, we have released three albums, which you can listen to and buy on our bandcamp page.” Most recently, they released Improvised Sessions Vol.1 — Meanwood, recorded in the city of Leeds, UK. Polyscope decided to offer the proceeds that the record will generate to the people who were hurt by the deadly fires in East Attica (Greece) in late July. “This is our way of giving back to the people and to communities,” P tells me.

Another Polyscope record is called Whisky for the Astronauts, from a band that bears the same bizarre name. It was recorded and has been released in two formats: stereo and 5.1 surround. “Whisky for the Astronauts is an example of what Polyscope represents,” says P. “We want to experiment, for example, with different listening formats, like 5.1 surround or quadraphonic sound systems, different ways in which we experience music. It all comes down to the idea of putting colour on our map,” he concludes.

Imagining people grabbing boxes of colourful paint and throwing them on the ground, I headed to the train station. Looking outside from my wagon’s window, I saw London and the omnipresent gray clouds over it. Maybe our map needs some colour, indeed… Will Polyscope succeed in this task?

To get to know Polyscope better, you can follow their Facebook and Instagram pages, where they regularly report on their progress, events and releases. To listen to the music, you can visit their bandcamp page.

DIY Projects Video: creative do it yourself wedding ideas

DIY Skin Care Tips : There's something for everyone with...

DIY Furniture : How to build a sliding door console....