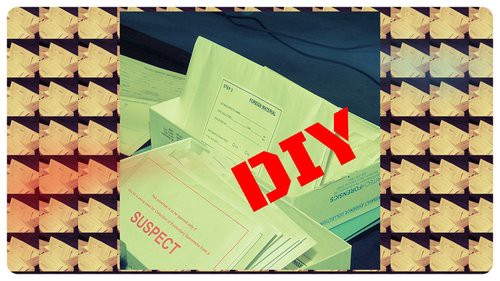 This article was originally posted to The Conversation, a blog by ladies night regular panelist and all around badass Teacher Allyson. We’ll be carrying more of her articles going forward as Allyson works on her upcoming novel.

Melania Trump had a point when she said that women need hard evidence before they accuse a man of sexual assault. Women are not believed as victims, and he said-she said is very hard to prove. We also live in a culture where the woman is often blamed for the incident, including by herself. We live in a culture where “boys will be boys” and we train women on how to avoid an all-too-common scenario, as if they have the power to prevent the situation from occurring. All this means that if women need hard evidence to see their accusers brought to justice, they need a way to gather evidence in a way that is less traumatic for the survivors, so that more will be empowered to come forward.

Talk to someone who was strong enough to withstand the invasive and humiliating process that is getting a rape kit done in a hospital, and you will hear stories of trauma following the initial violence that tug at anyone’s heart strings. There are trained professionals who handle processing these kits, but there are not enough, and the emotional support that survivors need is often lacking. So how can we, as a modern, technologically savvy culture, empower women and reduce the trauma that comes with collecting evidence from a traumatic event?

Enter the DIY rape kit. It is the size of a large first-aid kit and contains everything a person would need to provide evidence for their sexual assault in a court of law. In this kit are bandages, sterile gloves and swabs with tamper-proof bags and labels. These are used to collect DNA evidence and send to law enforcement for analysis. There is also a separate, tamper-proof compartment with a microphone and camera for victims and a trusted third party to record the victim’s account and take photos of wounds. It runs on a small battery and a 2–4 hour window to collect evidence and record the victim’s account. The container is sealed in such a way (electromagnet, tamper-proof tape, etc.) that law enforcement know that the kit has not been tampered with and is admissible evidence in court. The collector and survivor sign statements included in the kit stating that all the information contained was collected in the allotted time, accurately portrays the events, and will include jail time for the accusers if the intent is to defame the accused instead of justice for the survivor. The last piece of reinforcement so the account of the victim is valid is a timer that is activated when the kit is opened, and stopped when the kit is closed, which can only happen once, that allows those processing the evidence to know how long it took the survivor and their evidence collector to complete the task.

The first response from many people has been “What about the men who are falsely accused?” I’m not going into how small a number that is relative to the unreported incidents, but it worth finding a way to reduce false accusations. The way to protect the innocent lies in the training and dispensing of the kits. If those who are trained in the kit’s use sign a form at the end saying they understand that using the tool to condemn the innocent will result in jail time, say 30 days. This will stop people from trying to use the kit for nefarious purposes. How do we know this is effective? Talk to those who are mandatory reporters of child or elder abuse; that fear of punishment for not reporting is enough to overcome the fear of the child or adult’s life changing dramatically in the name of their safety.

Who has the kit and is able to administer it is also important. This cannot be an over-the-counter solution, as it is evidence for criminal behavior and needs to be regulated to ensure its validity. Emergency responders (fire, police, and EMS), medical professionals, and people who take an extended First Aid course can have the kit on them, so that if someone needs the evidence on their body to be processed, it will be done so more comfortably and without condemnation or judgement.

It is sad that this idea could change the world, because if men and women respected themselves and each other, this would not be a problem. This is a higher ideal than is feasible in today’s society with all of the fighting, sensationalism, and divisive nature of the government. However, something does need to be done so that women are less fearful of retaliation or hatred after experiencing something already traumatic. We have to empower women to come forward in a timely manner so that their aggressors can face justice. This could be the first step to ensuring what she said carries as much weight in court as what he said.

This doesn’t help those who were assaulted before DNA evidence was admissible or collectible, nor does it help those who waited over 72 hours to have the evidence collected. Who it does help are the survivors who are impacted by this from now on, so that the culture can change when the people at large see how many citizens are impacted by this type of violence. In my head I see mountains of these pastel plastic containers ready to be processed by an understaffed investigative unit.

This is also just the first step in solving the problem. Rape kits across the country are in a horrible backlog, as Time reported in 2014, and Mariska Hargitay’s organization Joyful Heart is trying to fix. Law enforcement needs the resources and the determination to process these kits and see justice done. Giving women a way to collect their evidence in a safe, supportive situation is only going to increase the number of rapes and sexual assaults that are reported, but not the number of perpetrators that come to justice; that responsibility lies with our government.

We have the technology and the infrastructure to get these kits, and create the training needed to use them properly, overnight, but do we have the will and the compassion to empower victims of this crime we have only started to bring to light? I’m not looking for credit for the idea; that’s not the point. I want justice for the thousands of women around the world who daily have to endure the trauma of their experiences in a society that doesn’t believe them. I want this problem to stop, and hopefully, so do you.

DIY Crafts : How to sew a personalized reading pillow...