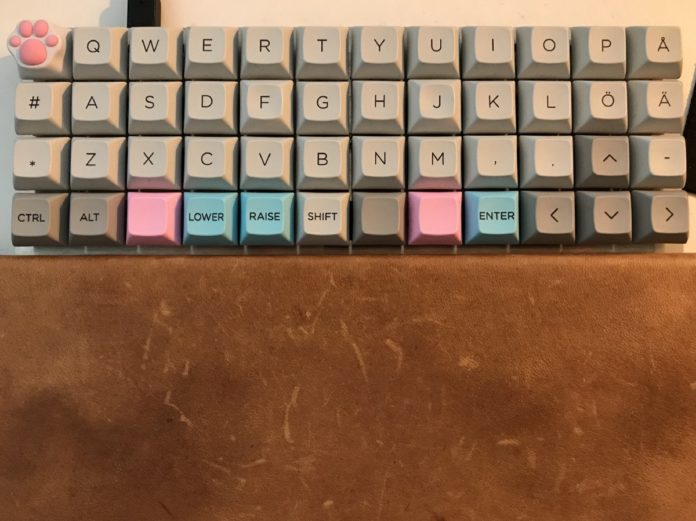 DIY : The constr of a Planck, the review. – AndEcho – Medium

A journal of my first mechanical keyboard build.

Video at the bottom of the review

The construction of a Planck, introduktion.

The construction of a Planck, keycaps

The construction of a Planck, keyboard switches.

The construction of a Planck, wrist wrest.

The construction of a Planck, artisans.

The construction of a Planck, the build.

When I say love, I really mean love. So much so that I have come to believe that all keyboards should be ortholinear. I know I’m in a minority here, but for my brain this is just more logical. I found it much easier to learn touch typing on my Planck than I ever did on my staggered keyboard. It might just be me tho, you may feel completely different.

What is a Planck?

When you first look at a Planck you see a really small keyboard, or something that at least looks kind of like a keyboard. In fact it’s not a small keyboard at all, you may see 48 keys, but I see over 130 keys.

If you look closely att the keyboard, there are some keys that are not on a “normal” keyboard.

In my case it says “Raise” and “Lower” on the two keys on the bottom row. I see these keys as extra “Shift” keys. When you use a normal keyboard you get an “A” if you press the “A” key while holding the “Shift” key, and an “a” if you just press the key alone. The same principle aplies to the “Raise” and “Lower” keys. If I hold down on my “Raise” key, this is what my keyboard actually puts out.

Now the numbers are right under my fingers on the home row, and all the special characters are easy to reach without having to move my fingers hardly at all.

When I access the second layer, the “Lower” key, I get this:

I put the arrow keys and some media controls on this layer. I’ve also thrown in some macros so I don’t have to write my email addresses over and over. You can put whatever macros you want on there. In fact, you can put whatever you want on any key on the keyboard. That is the whole point of this keyboard. You use something called QMK to program the keyboard. There are different ways to use QMK to program the Planck. There is the original and a bit more complicated way that you can read about here:

But that way is a bit to complicated for me so I use this instead.

This is what it looks like on my first layer. It’s my “Base” layer, that is to say my normal layer that I use to write text like this. This is the layer that is active without holding down any “modifier” buttons.

It looks a little bit odd but that is because I’m Swedish and the computer translates certain keys. If I tell my computer to use the Swedish language it will change some characters to others, it will “translate” if you will. Like if I were to plug in an English keyboard and press the key that says “[” it would come out on the screen as “å”. All computers act this way. But as soon as you know what characters come out when you press certain keys you can program the keyboard to do whatever you want. And that right there is it:

To get the custom key map configuration on to the keyboard you need to flash it. You do this by pressing the “Compile” button in the Keyboard Firmware Builder. It will then download something thats called a “Hex file”. You will use that to “Flash” your Planck.

I’ve watched a lot of videos of how to do all this and I recommend you do the same if you want to do this yourself.

Here are some links I found helpful:

Top Clack QMK Special with the creator of Planck and QMK, Jack Humbert

I’ve been using the Planck as my only keyboard for several months now. There is no way I’m ever going back to a regular keyboard. Both the small form factor and the ortholinear layout has become second nature to me. Once you get used to switching layers you quickly see the advantages in having a really small but really capable keyboard. Minimal movement of the hands make me a much faster typist. That in combination with all the other great things with mechanical keyboards, such as mechanical key switches and exchangeable keycaps for almost unlimited customisations, makes this a keyboard I would recommend to anyone.

Here is a video of me talking a bit about the Planck, and also, me typing on the Planck.

Thoughts about the Planck keyboard

DIY Crafts : Looking to get the best pictures on...