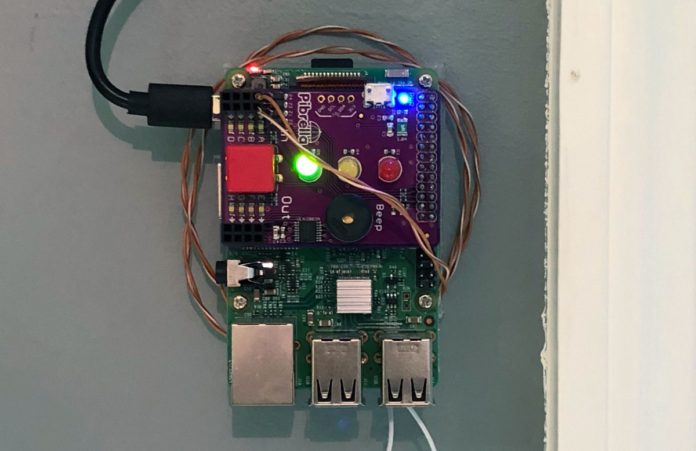 DIY : The Bathroom of the Future! – Brian W. Wolter – Medium

It’s not often that one is presented with an opportunity to innovate in the bathroom space, but just such an occasion arose earlier this year when the Hirepurpose team moved offices and our bathroom capacity was suddenly, tragically reduced by half.

Our previous office had long been plagued by unreasonably long bathroom lines. At several high-demand periods throughout the day we’d be forced to wait three, four, five people deep while complaining bitterly to each other until our turn to use the facilities arrived. With even fewer bathrooms in our new office concern about timely access was naturally high.

Believing there may be a technological solution to this problem, we decided to do what all good engineers do: find a way to make more efficient use of our limited resources. We figured that if we could find a way to better coordinate bathroom access and advertise availability we could avoid spikes in usage that make annoying lines. We needed a sensor that could determine and broadcast the bathroom’s availability.

This turned out to be not quite as straightforward as we originally thought. There is one notable wrinkle: it’s not enough to know the door is closed, you need to know if the bathroom is actually in use – that is, locked from the inside. After considering and discarding a variety of “creative” solutions (no thank you, motion sensors and facial recognition), we landed on a straightforward and reliable approach.

Our solution is to incorporate the sensor into the lock itself, basically like an airplane bathroom. The bathroom is considered to be in use only if the door is closed and locked from the inside so there are no false positives from a vacant room and there are no extra steps for the user.

We employ a Raspberry Pi, a magnetic switch, and a barrel bolt to both lock the door and detect the change in availability. The state change is updated via a REST endpoint running on an AWS Lambda function which in turn updates a Slack channel so the current availability is always a glance away.

We call this system the Occu-pi (pretty good, right?) and you can build your own for about $75 in components and a few hours of time. (Hey, maybe even try to get your office manager to pay for it?)

Here’s how to do it.

You’ll need the following components to build your own Occu-pi. Everything can be found on Amazon at reasonable prices with Prime shipping.

If you live in New York City, you might want to check out Tinkersphere, a totally awesome neighborhood electronics shop in the East Village where you’ll find everything you need plus a million things you don’t but will be tempted to buy anyway.

If you’re new to this stuff, you may also need or want:

In addition to the hardware components, you’ll need some software. Feel free to write your own (it’s really not that complicated) or use our version as a starting point:

We also used a few other parts like plexiglas, screws, and standoffs to mount the Occu-pi on the wall. As mounting will be somewhat location-dependent, we’ll leave this part as an exercise for the reader.

Assembly is pretty simple if you have any level of experience with Raspberry Pi and GPIO pins: there’s really just one component to wire. If you’re starting from zero, you might be interested in reading this introduction to GPIO before you get started.

First things first, set up your Raspberry Pi according to the instructions it comes with. This will take a little time. You’ll have to prepare a bootloader on your SD card, maybe stick some tiny heat sinks on the CPU, install an OS – stuff like that.

Once you’ve finished you’ll want to assemble the system and verify everything works before you start bolting things to the wall.

At this point you’re going to need to install the controller software on your Raspberry Pi to interact with the GPIO pins. Here’s the source for the version we wrote, feel free to use it as a starting point. We wrote ours in Go because Go is the best language and I will fight anyone who claims otherwise. Most people seem to use Python for these sorts of projects, however, so you may find better documentation available for that.

However you decide to do it, the general approach is the same: when the lock state changes we simply POST an update describing the change to an AWS Lambda function. Then that function (or whatever service you want to send updates to) should take some action—this part is up to you.

Now that our magnet is secure we’re going to arrange everything on a tabletop as it will be installed later and test the system by sliding the bolt closed and open through the catch to trigger the switch—basically we want to simulate locking the door.

For us, this was about 3/4″, but the distance may vary depending on the strength of the magnet and the sensitivity of the switch. Aim to have the tip of the bolt about halfway into the trigger range when closed, this will give you a bit of budge room when mounting.

Your very own Occu-pi is built, installed, and running. You are a hero in the office, your co-workers have probably attempted to carry you on their shoulders to happy hour and pay for all your drinks. The transformative power of technology has never been more clear.

DIY Crafts : How to Reupholster Almost Anything • A...

DIY Crafts : Under the Sea Color By Number |...