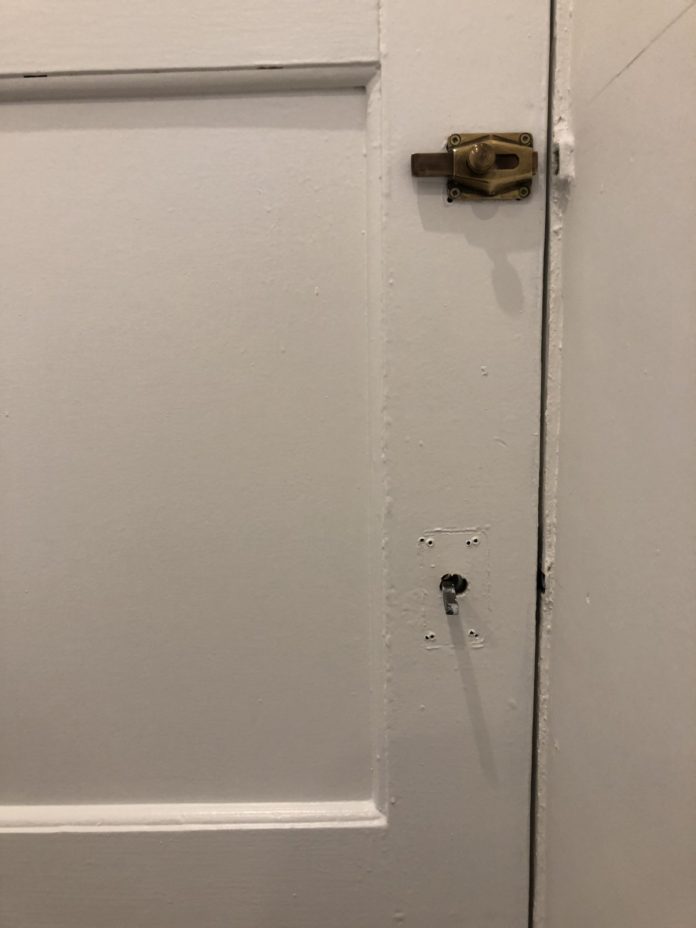 DIY : That time I got stuck in the bathroom … – Richard Ramsden – Medium

It’s been a very long week indeed. I’ve spent it on my own, trying to recover from the upheaval that a big building project brings.

It’s been useful having the run of the house, being able to leave tools and open cans of paint strewn around the place without fear of a teenager mortally wounding his or herself by accident. I’ve painted, sanded, bodged and built, and it feels like I’ve reclaimed our house from the carnage our builders forced upon us as they displaced our stuff from a whole floor of our house. All that stuff is back in its’ proper place now, and normality has been restored.

This morning, I carried on, finishing off the downstairs bathroom, clearing up the decorating mess, ripping up the masking tape and scratching away at the inevitable paint spills on the floor tiles. There’s as much work to do to put things back together as there is to actually improve them, it seems.

We’ve had an ongoing problem with bathroom locks, and one of the key requirements left by my family this week was to ‘get that ******* lock to work’, which I did by repositioning the screws and filing away some old paint and a bit of metal to make it all run smoothly.

Job done, except then I needed to paint the door, so off came the lock again, along with the handle.

The lock and handle sat on the bathroom window sill, their designated safe place, until last night, when I noticed that the handle was a bit grubby and decided to give it a clean with some Brasso.

The Brasso worked perfectly, and the door handle left on the kitchen counter as I went off to drink wine.

The kitchen counter. This is an important detail.

Back to this morning. I got most of the stuff out of the bathroom, cleaned up a bit and decided to refit the lock. It’s hard to screw into a door that’s swinging free, so I pushed it closed and repositioned the lock, checking it worked so that nobody would blunder into the bathroom ever again.

Next, the handle. The handle? The handle that’s now … downstairs in the kitchen, and I’m upstairs in the bathroom, with a closed door, and no handle.

Now, this was a predicament.

Clawing at the spindle with bare hands quickly revealed that it wasn’t going to turn without a lever of some sort and that I was well and truly stuck.

The rest of the family were coming home that day, but not until the evening. The in laws have a key, but all the extra paranoid security locks were still in place on the front door because I hadn’t actually been outside yet, so they weren’t even going to be able to get into the house, let alone rescue me.

At least I had a phone, so I obviously tweeted about my predicament, threading a few comments and photos together, drawing a few laughs, which made me feel a bit better, but no less stuck.

Then the actual practical people started to seize the moment and offered all sorts of ways to pop the lock using basic implements that might actually be in a bathroom. Somebody sent me a detailed sketch on how to use a pair of toothbrushes to force the spindle, but I only had one toothbrush, and that was electric.

I don’t know, or want to know, why these people seem to be able to bust through any lock in any circumstances, and it’s probably best not to ask.

So, resourcefulness. I was going to have to make do with what I had, which wasn’t a lot. I was stuck in a bathroom that had recently been emptied of everything, ripped apart and put back together. All I had were the few things I couldn’t be bothered putting away the night before — a small screwdriver, a paint brush, a few tins of paint, a scraper and an old toy boat.

Help was at least ten hours away, currently in Brighton, and I was getting slightly desperate, but at least I had a toilet and running water, so the wait I was resigning myself to would be boring rather than uncomfortable, and at least I could have a shower.

There had to be a solution. Had to be. I tried to think laterally about the things I had, looking for the alternative use that would let me out. The screwdriver was too small, and wouldn’t catch the latch mechanism. The paint brushes were useless. The toy boat was a toy boat. But the scraper?

The scraper was a standard issue paint scraper, designed to remove gunk from wood and wall. It had a sharp, broad blade and a rubber handle. I couldn’t use the blade to disengage the lock because the latch was facing the other way, but the scraper’s handle had a hole so that it could be hung up out of the way. Could that hole fit the spindle? Could it? COULD IT?

It did. It fitted perfectly, and I gingerly turned it, fearing that the whole would be just a touch too big and slip around the spindle instead of gripping it. But it didn’t. It clung fast and the door was open.

I like to believe that a while ago, in some design studio somewhere, some genius sat down and tried to ‘add value’ to the humble paint scraper. How could it be made better, unobtrusively improved, given more utility and purpose?

Perhaps he or she mused that people use these tools when they’re painting and decorating, and that they take things apart to do so. Perhaps he or she had been caught out before and remembered getting stuck in my type of situation. Why not, then, just add a hanging hole, but size it to fit a standard British door spindle of the type that’s inside every door handle in the country?

Why not just do that?

Maybe my luck in having that tool to hand wasn’t luck at all.

DIY Crafts : These clay plant stakes are made from...

DIY Sugar Scrub Recipes : Prefer to make your own...