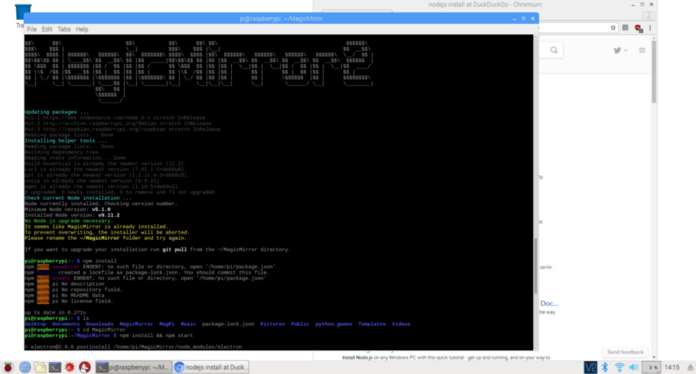 I decided to use Raspbian, the Raspberry Pi Foundation’s official supported operating system (a Linux distribution), to run my Raspberry Pi.

I downloaded a Raspbian OS Image from the Raspberry Pi Foundation’s website on my PC. I made sure to download Raspbian Stretch with Desktop and not the minimal image (which only has a command-line interface) because the Operating System requires a GUI to display the MagicMirror interface.

Once the download was completed I used 7zip, an open source file archiver that supports many formats, to unzip the Raspbian Image.

“Flashing the SD card” refers to writing an OS image to the SD card. My PC did not have an SD card reader, so I used a Kingston USB 3.0 Card Reader which allowed the micro-SD to be read from and written to like a USB device.

I used a free open-source software called Etcher to flash the Raspbian OS image onto my micro-SD card. Etcher is a simple SD card flasher app that works on any platform.

Now that the OS image was flashed onto the micro-SD card, it was time to boot the Raspberry Pi! I slotted the micro-SD into my Raspberry Pi and turned on the power, where I was greeted by the Raspbian Desktop.

DIY Furniture : From Wine Box to Footstool in a...