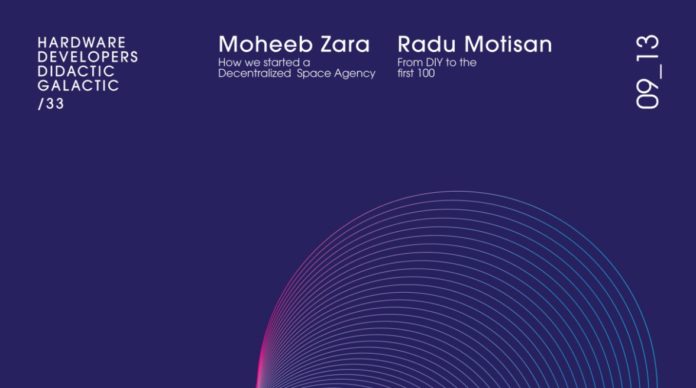 DIY : Shooting For The Stars With Big Projects and Bigger Ideas

Moheeb Zara takes the stage to talk about establishing a decentralized space agency.

Hardware Developers Didactic Galactic convened once again on September 13th for the the thirty-third time to welcome Moheeb Zara, who told the story of his vision to create a decentralized space agency.

Join us as we take a deeper look into his roller coaster of a journey. If you weren’t able to join us in person or live on the stream, you’ve come to the right place.

How We Started a Decentralized Space Agency With Moheeb Zara

Moheeb Zara is a software developer and evangelist at Hologram.io. He has extensive experience with both robotics and hardware hacking, and even served on the board for HeatSync Labs; a hackerspace in Mesa, Arizona.

His past work involves several robotics projects, artistic works, connected automobiles, and even props. Moheeb was even the youngest NASA Space Grant Intern at NASA in 2010, where he worked on underwater robots.

He is also the co-founder of Southwest Maker Fest and ASAN (The Autonomous Space Agency Network). The name is also NASA backwards, which took me more time to realize than I’d like to admit. He opens his story with an image of a flyer they hand out to “prepare” the audience for his story.

The first ASAN meeting took place in 2016, when Moheeb received a call from a friend of his, who told him to come over to his house, because they’re starting a space agency, which struck Moheeb as odd, but he went anyway.

When he arrived, he found an eclectic mix of skillsets, ranging from artists to journalists, to musicians, and of course, himself. Moheeb was the only engineer, so as he put it “Well, I know I’m going to be building everything.”

One question they settled on very quickly was this: “How could they get the punk scene interested in science?” Their experience in marketing bands and different groups led them to decide that they should play to their strengths.

They settled on a mission statement that would ultimately become their guiding light forward:

“Our Hypothesis is that nonprofit space exploration is both possible and necessary for the future of the human species. ASAN develops open source technologies for the peaceful and artistic exploration of the cosmos. Our missions rely on the self-initiative of our members, who compromise a transnational network of community-oriented space agencies.”

The group was heavily inspired by The Association of Autonomous Astronauts, which was a group that existed from 1995 to 2015 and eventually went into a dreamtime state of inactivity to let the ideas and technology improve. The groundwork they laid would be the inspiration for this group to launch ASAN.

The primary goals of ASAN includes engaging in artistic space exploration that is free of military or commercial influence, and distributing funds to DIY space projects.

To establish a brand and identity, the group started out by existing as an anonymous entity, usually attending shows or events dressed in clean suits, goggles, or even an alien outfit to distribute flyers and sell merchandise.

This eventually led to entire events held by the group. As they began to grow, Tanya Harrison partnered with the group at the Mars Bar event in Phoenix, AZ. She’s working with the group to help bring their ideas into reality.

This led to the first ASAN launch, which began with the goal of creating a near-space balloon. Moheeb didn’t want to get a HAM license, but he wasn’t above making his own radio controller, so he combined a Raspberry Pi as the transmitter from space with LoRa modules and a pocket chip as the ground station.

While this idea quite literally never took off, he explored other ideas and they put together the concept for a first launch.

They wanted a meaningful payload on this first launch, which led them to quote from an Apollo 14 astronaut by the name of Edgar Mitchell. The quote, in essence, describes how politics look so petty from a perspective amongst the stars.

Specifically, they liked the portion of the quote that read “You want to grab a politician by the scruff of the neck and drag him a quarter of a million miles out and say, ‘look at that, you son of a bitch.”

This led them to create a payload that consisted of a tweet related to the quote directly aimed at the current U.S. President, Donald Trump, who had recently pulled out of the Paris Climate Agreement talks.

This was the point when the time realized they had a voice and an audience. They were no longer just a small group of people with a dream, they had a chance to make a difference.

Their next project was a 360-degree 4K and VR balloon rig. The project consisted of a 3D-printed enclosure, a laser-cut triangular rig, a GoPro, and a GPS tracker. Unfortunately, as the project went up, they lost contact and it has yet to be found or turned in.

The next project involved rocketry. They created a simple flight controller using an Arduino starter kit. To demonstrate the ease of the project to potential DIY enthusiasts (and in keeping with ASAN’s reputation), they built the entire thing the night before launch. Thankfully, this time things went better.

This custom rocket project can perform a WiFi Deauth attack from 300m off the ground, thus disabling an internet connection in a specific area for a short period of time.

Another future project includes “Let’s Rocket” which Moheeb describes as a rocketry version of “Will it Blend?” but as he puts it: “Will it Rocket?” The goal is to see what things they can send up using rockets.

The team is also considering a badge for the next DEF CON based on a shield they were working on. The badge could potentially double as a near-space rocket or flight controller, for example.

A future project also includes a Pirate Radio Cubesat, which involves using a decaying orbit cubesat to broadcast music from local bands over a ham radio frequency. The signal would only be detectable in certain regions, thereby creating a throwback to the days of recording the radio and sharing it with your friends.

Finally, the ASAN team also has an online Journal of Critical Space Studies, which publishes stories, essays, and art about humanity’s future in space. Those who are interesting in submitting can learn more here.

At the end of Moheeb’s talk, he also showed off some of the team’s update videos that embrace their roots in both music and punk culture. Thanks to the efforts of the talented people at ASAN and from space enthusiasts around the world, our collective dream of reaching the stars still burns bright indeed.

DIY Crafts : These look so beautiful! How To make...

DIY Crafts : how to make a felt peony flower

DIY Crafts : Gather your list of friends and pick...

DIY : How to Easily Make Your Own Craft Coffee for...