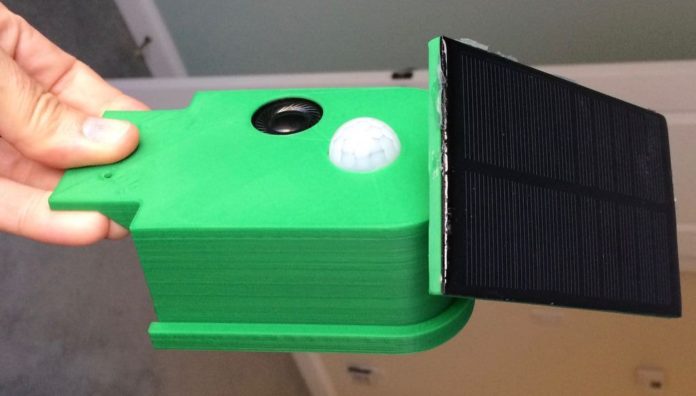 DIY : Scare Off Pests with the Varmint Detector – Hackster Blog

JonMackey had a problem with crows and chipmunks attacking his garden. Actually, in true hacker fashion, this wasn’t so much of a problem as an excuse to build a solar-powered device to scare the critters off. Preserving the garden, it would seem, was just a side benefit.

The Varmint Detector uses an HC-SR501 PIR module, modified for 3.3V usage for critter detection. When it senses movement in the area, it generates very annoying sounds, as seen in the video below. Clips can even be not-quite synchronized with other detectors in the area using a 433MHz transceiver, making it even more disturbing for trespassers. Fortunately, there’s an optional remote that can be used to silence things as needed.

The device, or devices, are controlled via an ATtiny84A chip, and power is provided by an 18650 Li-ion cell. A solar panel is used to keep the battery topped off, assisted by a TP4056 battery charging module.

The project’s write-up does a good job of outlining how to build this particular system, with code, print, and PCB files. Even if you don’t have a problem with marauding animals, it could serve as a good reference for several concepts, including SMD assembly, RF remote control, or working solar power into your projects.