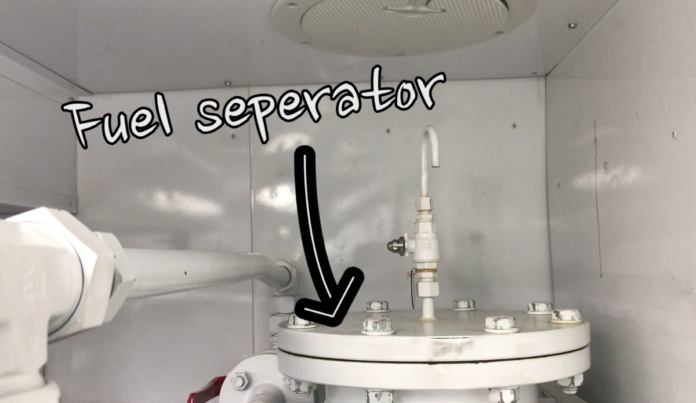 This is a fuel converter. It’s a device that works to ensure clean fuel is delivered to the engine. Inside there’s a filter, its my job to replace this filter.

Here’s how I did it:

No fuel came out of this one so I switched the tap off and opened the other one. This time fuel did come out!

I thought it was a good idea to place some absorption pads around the jug in case of spillage.

Diesel is nasty stuff so I never take any chances when dealing with it.

Once the jug was filled I emptied it into a large bucket that had been fully cleaned as the diesel would later on be poured back into the system.

The next thing I did was to take off the lid. All that meant was taking off the nuts and bolts using a spanner and a socket wrench and spanner.

I will always loosen these off evenly to release the pressure evenly.

Before taking out the last few bolts I cracked the lid open slightly to release any built up pressure.

Then I took off the lid.

Take a look inside, you’ll notice the locking nut, the plastic plate and underneath is the filter. All connected with a metal rod that runs right through the middle.

The next step was to remove the locking nut and the plastic and take the filter out.

Now because there will still be some excess diesel inside the filter, It needed to be drained. So I left it at an angle to drain.

Once the filter drained I took it out and placed it on a tray with some absorption pads so I didn’t make make a mess.

I then proceeded to drain the excess fuel from the tap.

This was a great chance for me to look inside the cylinder to see if there was any dirt or muck inside. There was!

I decided to modify the hoover slightly by attaching a small pipe to the end of the nozzle so I could get right to the bottom and clean it out fully.

Once it was fully clean I got the new filter ready to be installed. It wasn’t obvious which way round it went but it had writing on the side so I put it in with the writing facing the right way up.

I then put the plastic plate, the washer and the locking nut on and tightened the nut up using a deep socket wrench with an extension so that the filter was secure in place.

At this point the diesel needed putting back in. Before I put the fuel back though I made sure the taps where 100% closed and secured them with some cable ties just to make sure.

I then filled the cylinder back up with fuel using the small jug.

It doesn’t take too long but I needed to be careful not to spill any so I had some paper towels and absorption pads to hand.

Okay next step (after I put all the diesel back from the bucket) was to fill the converter all the way to the top using the pump.

So, I turned the “fuel separator 1” switch to ON.

Turned on the isolator switch on

Filled the cylinder to the top turn the pump on but I was very cautious. I did it in small steps to avoid overfilling and watched the level as I was turning on the pump.

Once it got to the top I placed the lid back on. Line up the holes and place the bolts back in and tightened them up evenly to 40Nm using the torque wrench.

The last step was to ensure the separator was completely full. So I turned the pump on and waited for the fuel to come out the top tap, again catching it with the small jug.

I was very careful and reacted fast as the fuel came out very quickly and I was ready to turn the pump off immediately.

And there you have it I changed the filter in a good amount of time and there was no complications.

DIY Crafts : Keep the kids entertained during Thanksgiving with...