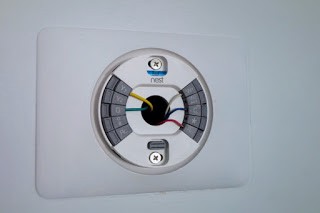 Honestly, I never anticipated I’d be writing another thermostat story but lo, look, here I am.

As you may recall, in part one I installed a new whatever thermostat, nothing fancy. Then. Then as you might recall in part two, I found myself with a free Nest.

Me escaping to home with my new free Nest. Free is never free, my friends.

This Nest* and I, we uh, yeah. Let’s just say I’m not feelin’ it. Especially as a work-at-home person. They’re designed for folks who spend the day away from the house. I mean, I guess I shoulda known. Logical.

That and it tends to randomly stop working. And it appears I’m not the only one who’s had that issue though any time I query the Nest people, they make me feel like I’m the nuts one, like they’d never heard of it before. ?!

Surprise!, the leading edge of a spate of wow, super hot weather too early in the season, nineties in May, predicted for the next five to six days. Which two days prior, I was running the heat. Yeah, no, I’m not joking.

I come home from a dog park-related meeting and Mike is pouty, “blaaahhh it’s hot in here,” as I’m cozying up on the couch with a blanket.

“Want me to turn the house fan on, babe?” “Sure.” Pull up the Nest app on my phone, turn on the fan, the little fan graphic is spinning…. uh….”Babe, do you hear it running?” “Nope.” Huh. Ok. What the hell, man. So I try turning the A/C on. Nope. No go. The app shows it’s running but it’s not in reality. Ok. What about the heat? Nope. Huh. Well this is dumb. Go downstairs, check the breaker as duh learned my lesson from the A/C repair guy last time which it appears I’ve neglected to mention, heh (when something’s not running, check your breaker); it’s fine and the furnace switch is on. Flip both off and on for good measure. Huh. Ok. Delete the app. Reinstall the app. Reset the thermostat. Get the A/C to kick on, oh ok, whew, turn it off. Try the fan. Nope. Uhhh, A/C? Nope. Heat. Nope. Nope. No. Yes! Heat! Turn it off. Try fan. Nope. Try A/C and heat again and again, no no no no no no. Ok, this is really really dumb. Wtf. Try to get in a chat with a Nest person but I’m fortieth in line. I wait, do other stuff, get down to twenty first, chat dumps me saying the connection failed because I left the app. Eyeroll. Next morning I wait and wait to get a chat person as again, there’s a massive line ahead of me. The first agent has me run through a few things then rewire the Nest. He told me to switch the A/C and heat wires, change the heat setting from gas to electric, then test again. A/C comes on.

Voila! Ok but whoa dude wait, I am not going to keep rewiring this stupid thing depending on the season, c’mon. “It’s a power sharing issue, this was a test, let me transfer you to a specialist.” But wait man, why after nearly two years would there suddenly be a power sharing issue? “It happens.”

I feel like, ya know, ….when I adopted Hailey, there were easily eight of her siblings there, all with varying degrees of shaking in their pants nervousness. Hailey then ended up with Addison’s Disease. I often wondered how many of her siblings led fearful lives, if any others got Addison’s, or bone cancer too.

Similarly, I’m left feeling like, I wonder if any of those other people that weekend of free Nest giveaways, if they’re experiencing the same issues as I. Turns out? On a four wire system, likely yes. Get the specialist on chat and she says I need a C wire, it’s a c-note or two repair but before my jaw hits the floor she types up that they’ll reimburse me the cost. Jaw hits floor anyway as wow, well, I hardly expected that.

She asked if I had the old thermostat which no of course not despite my packrat tendencies, so she said go pick up a temporary one and we’ll pay you back for that too.

I swore up and down and all around every which way sideways to Sunday I’d never purchase another Honeywell product in my life.

To be fair, most of the other products were either far too old school, out of the Nest budget range, or too inexpensive to trust. Still. I know. Sigh.

Luckily, or unluckily, I’m too good at changing these damn things out now, it took me all of five minutes. And we’re back in business with a working fan and working A/C. Something to be said for “dumb” electronics, all right.

Dumb tech. It ran though. But so, see, here’s the thing. Based on some “C wire Nest” and “Nest power sharing” research online, turns out the darn gizmo does really kinda for real require a common wire C to power it. Despite Nest’s proclamations to the contrary. Either they knew this all along, fudging the truth or it’s a major design flaw now rearing its ugly head. It’s catching up to people, and them, hence I suppose their unprompted willingness to pay to correct it.

Here’s my original wiring job. No C wire. Only a four wire system. Hm. After reaching out to oh I dunno eighteen different companies through support’s “find a pro,” only about four responded. Probably because we were in the grips of that far-too-early-in-the-season-super-hot heat wave. C wire? Pffft, frickin’ who cares, moving on. Nest needed full estimates before work could begin which I got from one that was approved just as I was about to send another. I really wanted the another company, not the approved one but yet the approved place pretty much set an appointment without consulting me and showed up.

As Mike was at work, I had to corral the people-hating beast-monster upstairs and sit with him, lest he destroy the bedroom left alone. Meaning I missed out on what the guy was doing. If there’s one thing I really can’t stand, that’s it, not helicoptering over the repair.

And soooo essentially we got number one. He wasn’t able to run the C wire because yeah, fully finished basement.

I heard things running, he texted he was done so I met him outside. He cheerfully chirped, everything is great! I asked if the fan was running on its own. His face dropped, “uh, no.” That needs to happen I said. “Uh, I uh plugged the uh G fan wire into the C slot so the fan isn’t going to run on its own, I don’t know how to do anything else, sorry, sign here on my phone.” The charges are higher than the estimate though…..”oh uh (waving his phone around) yeah I don’t control that, sign here saying I did the work.” Needless to say, I’ve reached out to this well-rated company, Powers IoT. Don’t use them. Do not: 1. They’re not local, turns out. They subcontract out. 2. They charged me full price for work that wasn’t done. 3. They then overcharged me. 4. They inconvenienced me up the wazoo, twice. 5. The fan issue is not resolved. He didn’t fix it. 6. He rewired my furnace without telling me (I find out later). 7. He spent all of five minutes on a workaround. 8. I have no receipt. 9. It actually shows as a recurring charge on my credit card. 10. They don’t answer their phones. 11. They are not doing anything to promptly remedy this. And 12. I coulda done that thirty second freakin’ wiring trick my damn freakin’ self. Terrible. I see now they have a minimum charge if they can’t complete the work. Heh. No doubt I’ll end up contesting the charges on my credit card.

First rewire. He moved the G to the C here and on the furnace. And for some reason moved the R to the RH. I wonder if I need to move it back to RC. Hmmm…. Letting the Nest people know mmmm, nooo, this was bad, we have the another company come out; he has a circuit board that will resolve this, he says. Because as I’m reading, there’s no easy fix if you can’t run a C wire. Or there is, that G to C trick solved the power sharing problem, but then you have no fan and technically it’s not the wisest wiring plan. This time, thankfully, Mike is home, he can corral the beast monster while I hover over Tony from DMS Tech’s shoulder.

And indeed, what he has is a Venstar Add-a-Wire.* Which I had read about. And guess what. It works.

What a cacophony of fruit flavors going on in there, wow. Hallelujah! It works! Thank goodness. Oh my gosh. I’m so tired of this dumb Nest, thank goodness the gizmo works. So now the fan runs. I can run the A/C. Run the heat. Aaaand also run the fan. All separately. Because there are times I don’t want to run the big guns, just the air mover. And Tony, super nice guy who knows what he’s doing and what he’s talking about and took the time to explain things to me clearly and not talk to me like I’m some dumb girl (I know, I’ve mentioned this many a’ time; it’s a huge deal to me. Us ladies, we are not dumb, do not ever treat us as such.). He showed me how the Nest is recognizing a C wire…

Ah! Ah! See, it says it’s got a C wire now, woot! …and where the proof in the pudding is in the technical numbers.

Tony says that lin number can’t be faked if there’s no C wire — it was at 40 mA now it’s at 200 which is good he said. Ok, ahead of myself here….He stuck on a wire part thing at the thermostat which took the blue wire and essentially split it into G and Y, turning it into a C wire. The Add-a-Wire gizmo then goes inside the furnace. Which, hahaha, ok, you already saw above. Doh. Lil’ backwards storytelling on my part, yeesch. Tony took the time to wire it properly on the furnace (one wire per slot, not cramming a million in there), checked and rechecked his work, and was tidy and orderly about it.

See, look how nice and tidy he wired! He cared. How rare, right? How nice, right? We need more Tonys in the world. Plus he so kindly let me take photos along the way as I was blog dorking out. Can’t help it, I wanted you to see there’s a fix in case your Nest decides to poop out on you too. Pretty awesome end result here. Well, I’m still fighting with the first company so that’s not awesome. But Tony was awesome and I’m glad he was here to help.

So if you need a Nest pro in the Chicago area and you go through the Nest pro search, be sure to pick DMS Tech (my nice review is already there, heh.) Or you can find him here.

And hey, apologies for the general radio silence. My mom was diagnosed with breast cancer and recently had surgery. Man, she’s a rock star though! She’s doing great, rock starring and badassing it all over the place, don’t worry. I’m so proud of her — the determination and humor she went into this with, quite enviable. She’s a powerhouse, people! So take care of yourself, mmk? Thanks!