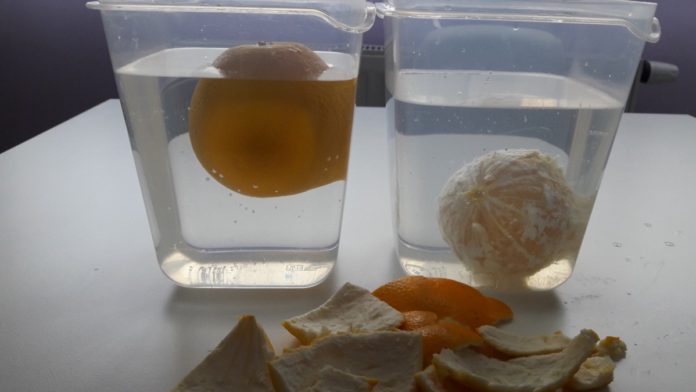 WILL IT SINK OR WILL IT FLOAT? ANSWERING THAT QUESTION IS ONE OF THE FAVORITE ACTIVITY OF THE PRESCHOOLERS. BUT HOW CAN WE TELL? STOP THE GUESSWORK AND LEARN WHAT REALLY DETERMINES IT. AND AS A BONUS, YOU CAN EAT AN ORANGE!

Science behind the Orange density experiment

Buoyancy — the strange sounding term — is the property of an object that describes how will it behave in the liquid. In other words, it tells us will it float (it’s positively buoyant) or sink (negatively buoyant).

So why do some objects sink and others float? We could intuitively say that mass of an object plays a crucial part — heavier the object is more likely it is to sink. Not necessarily! Mass is indeed important, but it’s only one part of the story. Another important factor is a volume of an object, how big object is. Having mass and volume, we can then calculate the density of an object. Density means how tightly is the object “packed”, how much mass is there per unit of volume.

The density of an object is an actual key to understanding its buoyancy. When we put an object in the liquid it sinks until it displaces (pushes out) amount of liquid equal to its own mass. That’s actually called Archimedes’ principle. It states that:

A body immersed in a fluid is pushed up by a force equal to the weight of the displaced fluid.

Another important consideration is the density of the liquid we are putting an object in. Water has a density of 1g/cm³, so the mass of displaced water is equal to its volume.

Let’s say we have an object with a mass of 10g. That means it will displace 10g of water or (since the density of the water is 1g/cm³) volume of 10cm³. So our object needs to have a volume larger than 10cm³ for it to float. In other words, if the object has less density than the water(1g/cm³) it will float. To conclude, will the object sink or float depends on the density of an object and the density of a liquid its placed in.

So how that explains our experiment? Well, unpeeled orange floats in the water. That means that it has a density smaller than 1g/cm³. When we peel off the skin, we remove some mass, but what did we do to its volume?

Skin of an orange is full of tiny pores full of air that makes it more voluminous. After peeling the orange, we have lowered both mass and volume. But the volume is now much smaller. If we remember the density formula (mass/volume), that means the density is now larger. It’s larger than the density of the water and — it sinks!

What will you develop and learn:

If you liked this experiment and want more cool stuff to do, try another kitchen experiment! Have some gummy bears around? Try Demonstration of osmosis with gummy bears. Or see what happens when you put an egg in the vinegar. Spoiler: It’s bouncy and glowing egg!

DIY Furniture : Not just a DIY pallet bar, but...

Weighted Blankets DIY : How to make a No Sew...

DIY : Build Your Own Smartphone with iSquare Mobility’s DIY Kite...

DIY Crafts : Use Fabric to cover a table top!...