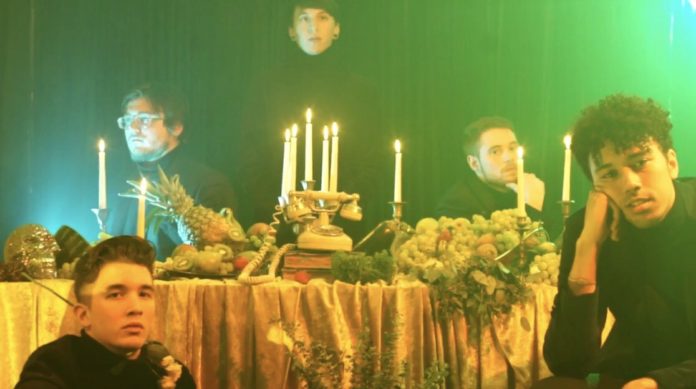 Meet Ocean Heights: New Jersey natives just a few years out of high school, who are delivering maturely smooth jams that blend mellow-vibed indie rock with an experimental, R&B edge. Much like how Chicago’s The Walters burst onto the scene with their EP “Songs for Dads,” a modern classic born of DIY bedroom pop and retro vibes, Ocean Heights recently released their sophomore EP “Flight,” inspired by artists from The Walters to Frank Ocean, embodying yet transcending their fresh-faced DIY approach with assured songwriting, performance, and production.

I’m excited to present their video for “No Waves” from “Flight,” which was co-directed by Houseshow friend and contributor Kristina Pedersen and frontman Justin Wilkerson, and produced by Evan Shinn. For those who are still in mourning for The Walters’ feel-good vibes and sweet guitar riffs, let Ocean Heights take the pain away — and certainly with the assistance of Kristina’s signature quirky and color-saturated visual aesthetics that she also used to great effect for our now-defunct Midwestern friends.

I spoke with Justin over email to learn more about their origins of Ocean Heights, their influences (which include everyone from Ricky Martin to his high school English teacher), meeting Kristina, and the East Coast house show scene.

Justin Wilkerson: I personally am inspired by my upbringing, my musical catalogue from day one ranged from listening to “Livin La Vida Loca” and “Bye Bye Bye” to Jodeci and Metallica. Somewhere along the way I landed in the middle and fell in love with the raw emotion of R&B artists like Frank Ocean, with the groove of artists like Arctic Monkeys.

How long have you been together as a band?

We’ve been a band for around a year now, I started Ocean Heights in high school, writing lyrics for what ended up being our self-titled EP in English class — also shout out to our English teacher Mr. Winters, he’s a big inspiration to me too. We put his high school photo on our band hoodies in honor of that beautiful man.

Tell me about the making of the “No Waves” music video.

I reached out to Kristina Pedersen to do the video for “No Waves” and was honestly surprised to get a response. We’ve been huge fans of her work since discovering her previous music videos for The Walters. She turned out to already be familiar with our music prior to even reaching out so we got to brainstorming, then fast-forward a few months we were linking up in Philly with velvet suits on in my cousin’s nasty-ass frat house party room with bags on bags of fresh fruit.

Is all your music DIY — self-recorded and self-released? Are there a lot of DIY venues around where you are in New Jersey?

All of our music is DIY as it gets, recorded and mixed in my bedroom. Vocals done in the closet, the whole thing. New Jersey is really a ghost town when it comes to DIY venues or even a original music scene in general. We’ve got about a 45-minute drive before we get to any DIY scenes out in Philly. But we don’t mind the drive.

Where are your favorite places to play music?

We’ve played a few medium-sized venues in Philly but my favorite places to play are just shitty basements with unfinished ceilings and hot water pipes five inches away from my head. The more dangerous the stairs into the basement, the better. (Editor’s note: agreed.)

What’s next on the horizon for the band?

Next on the horizon for Ocean Heights is taking the gang on the road. We’re hoping to do a little mini tour during the summer, hopefully my Ford Focus can get us out to Chicago, that’s a dream of mine to play there.

Also, we’ve got a show on May 11 at Lizard Lounge 215 in Philly, and May 17 at Boontunes in North Jersey with our pals from Florida, Flipturn.

DIY Furniture : Check out how this stay at home...

Home Improvement : Selecting The Best Side Table For Home Decoration...

Architecture : Mirrors By the Sea, innovation in tradional architecture, Paros