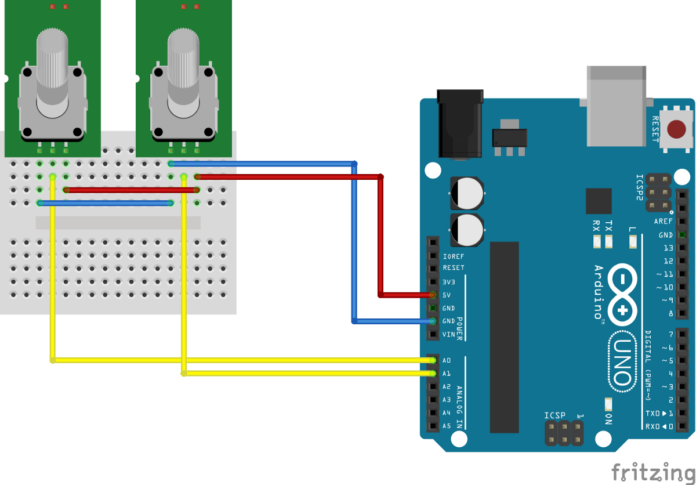 This French tutorial, in particular, helped me a lot: https://2froblog.wordpress.com/2012/07/19/controleur-midi-via-lusb-avec-arduino-49/

Hairless MIDI <-> Serial Bridge that will decode what the Arduino is sending through the USB port.

LoopBe1 that will forward the MIDI signals to Ableton or FL Studio, for example.

The Arduino IDE that will enable the program to be sent to the Arduino.

You can then create a new program inside the Arduino IDE.

Variables are simple: v0 and v1 will read the pins A0 and A1 at every step of the loop. v0_ and v1_ will be buffers for those variables.

To be sure we don’t send data all the time due to signal noise, we choose to have a detection threshold of 2, meaning v0 or v1 get updated only if they differ with their previous value differ by 2 or more.

The SendMidiToSerial function will help us send the whole MIDI instruction to the USB port using the MIDI message format.

The program will send data with the BAUD rate of 57600, so you better be sure the same number is used also for the BAUD rate in the Bridge:

Very simple: we convert the integer from the A0 and A1 pins into a MIDI value. If we detect the value as “newer”, we store it and send it.

Connect the Arduino with its USB cable.

Send the program to the Arduino (have it verified by the compiler first, to be sure).

Start LoopBe1 (be sure it’s not muted).

Start the Bridge and connect your Arduino Uno to LoopBe1, then set it “On”.

Enable Ableton (or FL Studio, Cubase, whatever you use) to read from LoopBe1.

It works quite well, right? (I know, my computer was dusty).

DIY Crafts : How to sew a cute Kimono Jacket,...