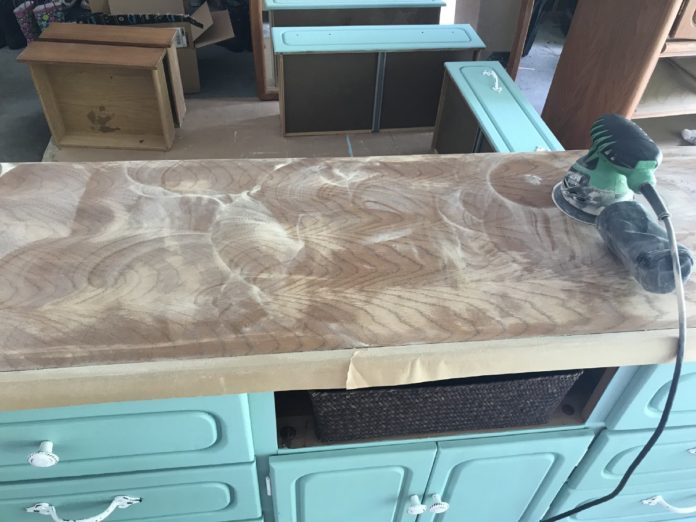 If I could write a post about everything that I’ve had to fix, repaint, repair, etc on this project and document with photos it would be novel length so we’ll just gloss over a few.

This thingy was broken. Actually 2 of them were. Went to Lowe’s and tried to find a replacement. They did have a wooden one, but it was too long and instead of lying horizontal/flat like this one it was vertical so the grooves were different. The worker tried to tell me just to cut it. I’m like, uh, I know I’m a girl who looks like I barely knows a Phillips from a flathead but even I know that’s not going to work. Then I realized the ones from the dresser were longer so I could CUT one of those and it would work. (This is why the center drawer was removed and a basket was put in its place. Actually I was going to put baskets across the top row of the big dresser but had a hard time finding 3 of the same size in stores. Found plenty of nesting ones though. And it was cheaper to paint the drawers and buy hardware than search and buy matching baskets.

Onto the next issue. Thought the drawers from the dresser would be interchangeable with the nightstand. Turns out they’re different sizes. Rookie mistake.

Isn’t this just a beaut?

First time using wood filler and I gotta say, it worked pretty amazing…this round. And why did I have to use wood filler when the nightstand appears done and looks amazing? BECAUSE I CAN NEVER FIND THE NUMBER OF KNOBS/DRAWER PULLS THAT I NEED!

This hardware must be popular. Since I couldn’t find the amount of drawer pulls I needed for the larger drawers on the armoire they had to come from the nightstand. Speaking of a disaster — why not watch Twister?

The next time I had to use the wood filler I think I left it on for 2 weeks instead of 24 hrs and I don’t know…it just turned out terrible. Which resulted in a not smooth surface at all. See where I repainted over it anyway, hoping that the paint would magically cover the hideous flaw? Yep, didn’t work.

I thought about just selling it as is or putting it in my son’s room…but I refused to let it beat me. So I sanded…and sanded. This stuff is like glue.

But I finally got there. Then I toyed with the idea of staining the front for a bit of contrast. I didn’t. Figured I’d screw that up somehow too. So here’s the sanded version. Smooth as a baby’s bottom.

Now to take a break and introduce Fredrick. He was my bug control and seemed quite content to just watch.

Onto the dresser. After many attempts I finally got the doors to close and the hardware to fit. Now to do the top. I have learned that I tend to put the cart before the horse so to speak. As in, I probably should have started here and worked my way down because even though I put this brown tape along the edge it still sanded my already-painted edges.

This took A LOT of sanding. I don’t think I’ve ever sanded something to the bone like this but I was pretty proud of myself for sticking with it.

We had some leftover stain from the farmhouse table my hubs made when we first moved in…like 7 years ago. I shook it in the can because that’s the way I mix paint that’s been sitting. The wood grain looks nice but I wanted darker, after all our table is darker.

I started painting the mirror and my brush struck the bottom and came up with…sludge. Ughhhh…so I stirred it with an actual paint stick and it got darker. Much darker. Now my mirror was nearly black so I wiped it down and came out a little lighter.

Then I went back and painted the dresser top again. Yikes, now it’s too dark. Almost black and that wasn’t what I was going for at all. Back to sanding. Not all, just enough to lighten it here and there. I’d planned to repaint where the sanding had messed up my perfect paint job, but my neighbor came over and said she liked the worn look. I did too! So I sanded other areas on all the pieces.

So now it’s time for my FAVORITE thing-the Before/After pics!!

Dresser-look at those ugly drawer pulls

Aside from being done-I’m pretty proud that all my drawers and doors shut. One kinda sticks but I rubbed the metal with wax (that’s what someone told me to do) and I think it’s better. Once it gets in a house (not mine) and out of a garage, the drawers will slide in and out easier.

Now all it has to do is SELL and my van will retake its rightful place in my garage!

TIP: Stick with it. The end result is usually worth it.

Home Improvement : Some Electric Water Pumps Accessories To Remember And...

DIY : The most popular woman magazine!

DIY Crafts : Whether you’re a nature junkie or simply...