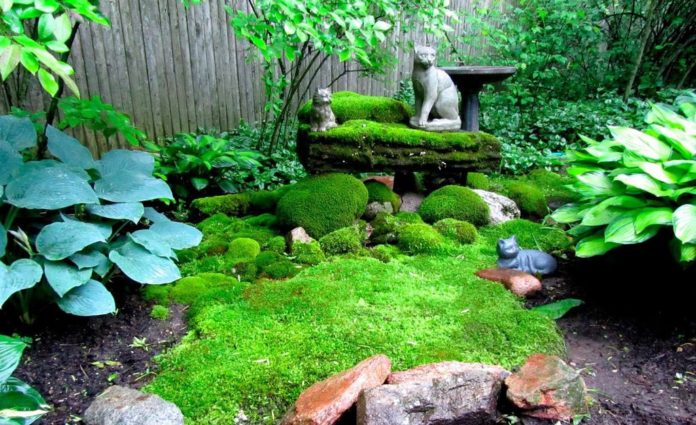 Moss gardens create curb appeal by evoking the look of rich, green carpeting. However, moss is also very useful for gardening and landscaping. Moss such as carpet, reindeer and cushion moss species are widely used to accent gardens.

Avid gardeners find the most beautiful moss in gardens in Japan where they have been cultivated since the Feudal Era.

There are many benefits to moss in gardens. These include:

It’s important for gardeners and landscapers to know the specific type of moss and purpose for which the moss is intended.

For example to prevent soil erosion, choose a species of moss that grows and spreads more quickly than its brethren species.

Fern moss, a fast-growing species, is yellow-green and has leafy branches resembling “fern” that grow from a central stem.

The Environmental Benefits of Moss Gardens

There are several environmental benefits of moss in the garden. As a generally slow growing plant, it emits oxygen that helps improve air quality.

Moss also soaks up carbon dioxide through sequestration. Moss is often used in wastewater treatment due to its absorption of toxic elements in air and water. Thus, moss acts as a filtration system for environmental impurities.

Because moss is a naturally growing plant, it seeks areas of soil that allow it to grow and spread freely. These are usually bare spots that tend to be water eroded.

Moss found in heavily forested areas of the U.S., and other countries have been known to be the first aid for wounds. In the U.S. in colonial times, Sphagnum moss was used to prevent sores from becoming infected. It was also used as packing between logs for log cabins.

In World War I, soldiers relied on moss as an emergency first aid to heal wounds. Packing wounds with moss, a natural preventative due to its biological properties, was well known to medical doctors during wartime when medical supplies were not accessible.

In addition to the beauty, a moss garden offers from graceful Fern Moss or creating beautiful mounds with Cushion moss in a rock garden, consider other benefits of your moss gardens.

Today, various species of moss are considered a design facet for environmentally responsible individuals who add it to external walls of homes and buildings.

Moss gardens are a must have for avid campers who want to “rough it” in the woods. Take along a small cooler of moss for first aid.

Use moss at the base of a camping tent to seal out insects and water. Dried moss is also useful for starting campfires.

Hikers who find themselves without water can use moss, which has acidic properties that discourage bacteria, as an emergency source of hydration. Merely wring water out of moss into a cup to prevent dehydration.

Your moss gardens will become the “Go To” for neighbors and friends when you grow moss for practical uses.

Moss gardens may also exploit your inner creativity. This is as easy as planning and designing moss arrangements with an artistic touch.

The best benefit of these gardens is how maintenance free they are. Gardeners don’t need to worry about fertilizers or regular watering. These gardens are carefree.

Conclusion — So Many Benefits and So Much Beauty

When all of the benefits or moss and the value of the natural beauty it adds to your property are considered, plant carpet moss gardens in or around forests of trees or add a fern or reindeer moss beneath a banquet of flowery shrubbery. Be sure you have Sphagnum moss to add to container plants and as a base for new plantings. Then, enjoy your garden.

DIY Crafts : Check out the blog for the EASIEST...