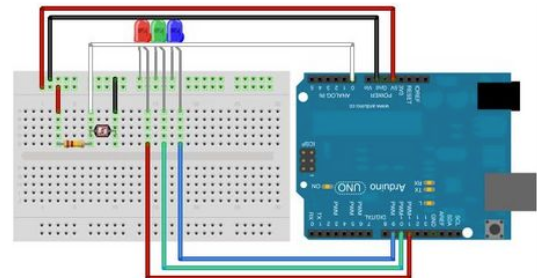 It was sophomore year of college and two other students (John Mera &Ryan Smock) and I were responsible for designing a digitally coded and electrically wired group project for an engineering class. We had 2 months to design and build the project; we decided to create a mood lamp that changes color based on both frequency and amplitude of the sounds it picks up on. We were entirely on our own to pick the right tools, materials, and parts for the project. We debated the best type of electrical design for the job, and we began writing down the different pieces we would need for this carefully-coded puzzle. We eventually programmed the musical mood lamp in C++

Before we could start coding, though, we needed a conduit through which our program could flow. The system we used was fairly simple, and consisted of: An Arduino, microcontroller; RGB LED lights; a microphone; a light-dependent resistor; a regular resistor; a Breadboard (for circuits); some jumper cables; and finally, some paper to act as a lampshade. We also used wires to tie it all together.

The microphone receives the sound and converts it to an electrical signal. In our code, we correlated amplitude of the electric signal with intensity (brightness) of the LED’s, and the frequency of the electric signals with wavelength (color) of the light. It took us a while to tune it and get it right, so that we could have the brightest reds for high frequency and high amplitude sounds i.e., when the beat drops. If you would like to learn more about mood lamps, read my previous article in the musical mood lamp series.

DIY Furniture : These home hacks are THE BEST! I’m...

DIY : Bob the Builder vs. The Engineers: Greenhouse Edition