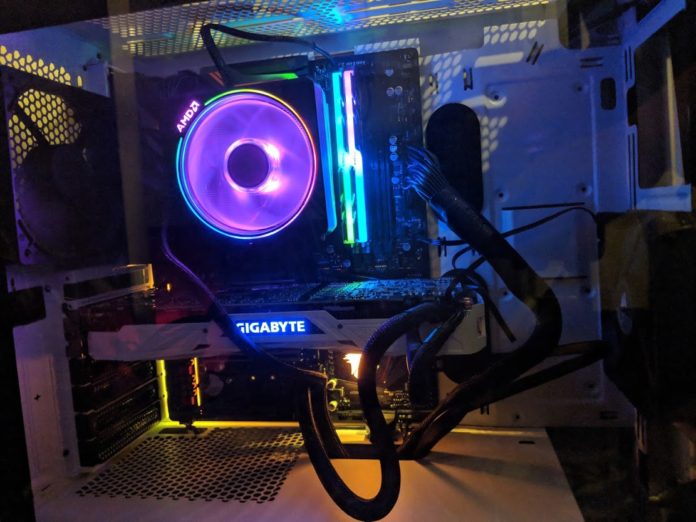 What I learnt from building my first PC.

I’ve wanted to build my own PC for a long time but never got a chance. After a drastic drop of SSD/RAM/CPU price recently, I built my first PC last month in October.

The reference I used is https://newbcomputerbuild.com/2018-pc-build/october-2018-gaming-pc-builds-of-the-month-1500-1000-700/ cause it is much easier to follow. The only difference is I switched to a pair of G.Skill RGB memory 8GB memory to make it more colorful 😀

The monitor I bought is Alienware 3418W, which is operating at 100Hz and can be overclocked to 120Hz.

The primary goal for this PC is to play most games at 2K 120Hz.

0. A ultra wide monitor definitely worths it for gaming & working

The price for a 34 inch monitor has dropped significantly, if you don’t need a GSync monitor, you can easily get a decent 34″ 60Hz monitor ~$500. If you target this at gaming as well, IMHO, if worths the price to spend another $500 to get the 120Hz + GSync.

Most games are kind of single threaded.. so you don’t need a powerful multiple core Ryzen 2700x CPU. Also, if I turned on Game mode (disable 4 CPU cores), Starcraft II will hang for 5 minutes at the onboarding page before becoming responsive. Monster Hunter: World also crashes sometimes when I switch to Game mode for Ryzen 2700X. Everything is stable in Creator mode (normal mode) tho. What I heard from most folks is that a Intel Core i5–8K is actually better, esp when i7–8700 has dropped to roughly $300 as well, you should consider an Intel CPU for gaming.

2. Most likely, you don’t a liquid cooler.

Nowadays it easily costs 40GB for a single game. If you don’t want to do house keeping for your games, just buy a 1TB SSD. The price is surprisingly low now. $110 is enough for a 1TB SSD.

4. You don’t need a Platinum Power Supply if you only play a couple hours of game per week.

This is the most regretful thing.. I didn’t understand what Platinum/Gold/Bronze mean for a Power Supply, I thought that was for the durability of the PS, however, it is for the efficiency of the power supply. If you don’t play games everyday for hours, a Gold PS is far enough. The price is a Gold rating PS is ~$60 while for Platinum it doubles the price at $120+.

A colorful box is fascinating, you’d love that!

That’s it! I’m not planning to give a tutorial on how to DIY your own box since I really don’t want to disassemble my box and reassemble it again. It is actually fairly challenging to build your PC the first time. It took me roughly 4 hours to build it (1 hour was spent to understand how to open the brand new Corsair Carbide SPEC-06 RGB Game Case). The advice is to always refer to Youtube for guidance!

Weighted Blankets DIY : How to make a Weighted blanket

DIY Crafts : Add some style to fabric or leather...