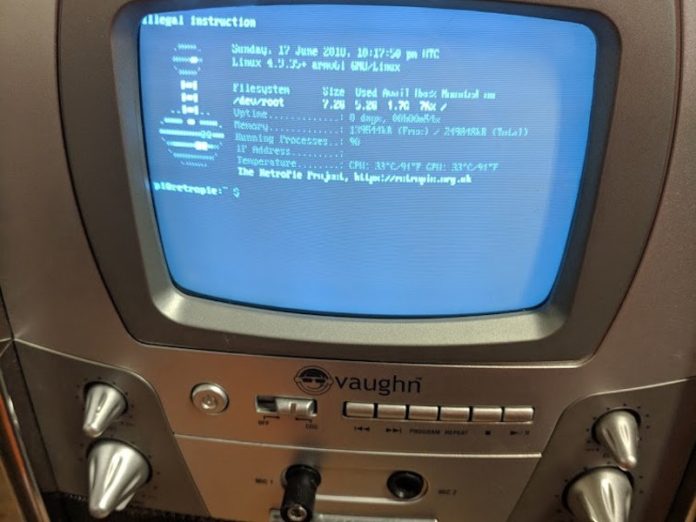 Earlier this year Brett Neese was on a quest to find a tiny CRT display. While once extremely common, these have largely been replaced with LCD models of various flavors, and after searching through thrift stores, eBay, and even dumpsters, he finally managed to find one in the form of a karaoke machine from around 2005.

The CRT will be perfect for the not-yet-revealed project he eventually has in mind for it, but since it doesn’t have a traditional RCA input, this meant a bit of hacking (while wearing rubber gloves to prevent shock) to get it working. What he found was that there is a header pin literally labeled as “video in” on the tube’s control board. Taking this at its word, he took out a Raspberry Pi Zero and wired in its “video out” signal. This actually worked the first time, displaying the Raspberry Pi boot sequence, and showing that sometimes things just work right the first time. With a little more hacking, he was also able to hook up a Raspberry Pi 3.

On the software side, the device is using Resin and a Screenly OSE Docker image, an open source digital signage solution, to push videos and websites to it at will. Neese notes that he plans on adding cellular data through a USB modem as well.

Having a Raspberry Pi running inside of a karaoke machine has to be one of the weirder applications these boards have seen. Even so, it seems to look unmodified when reassembled, and as of now runs a digital signage image that allows it to display videos and websites that he pushes to it.

DIY Crafts : I am always looking for cutting boards...

DIY : That’s a good point, I was also wondering about...

DIY Crafts : Be a Pineapple Inspirational Print and Coloring...