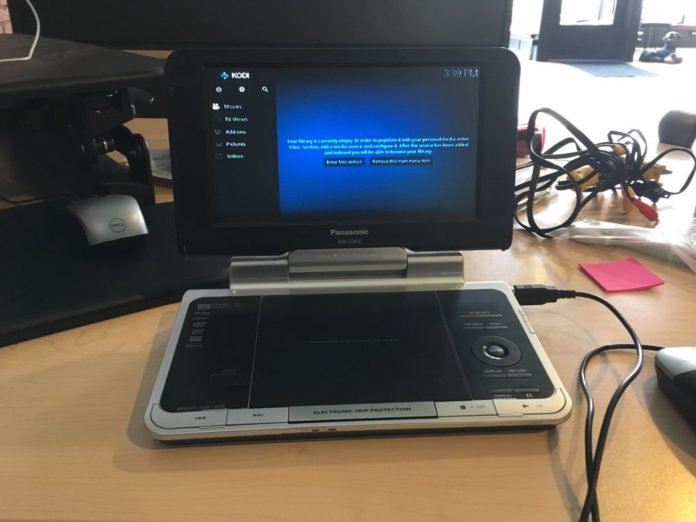 For a short period of time in the ’00s, portable DVD players were all the rage. They were more affordable than laptops of the era, and allowed people to watch their Friends DVD box sets wherever they went. That era came to a sudden, crashing halt when the iPad hit the market; no one wants to haul around a suitcase full of DVDs when you can just stream Netflix on your tablet. Now, used portable DVD players are dirt cheap, and Imgurian Jrhollis took advantage of that fact to build a media center.

Of course, Jrhollis had no intention of actually playing ancient DVDs. Instead, he converted his portable DVD player into a Raspberry Pi media center. Because he had limited space inside of the DVD player case, he chose to use a Raspberry Pi Zero W. That isn’t very powerful compared to the flagship Raspberry Pi 3 B+, so Jrhollis used the lightweight Libreelec media center OS with KODI, instead of the more common Raspbian + KODI setup.

The limited space also meant that a full size USB hub and sound card wouldn’t fit, so he pulled out just the necessary circuit boards from those components. Finally, he used an ADC (analog-digital converter) to read the presses of buttons on the DVD player and control the Pi. JRhollis reports that the setup works well for watching videos stored on a USB drive—and the DVD playing functionality even still works in case he ever wants to dig out some Friends DVDs.