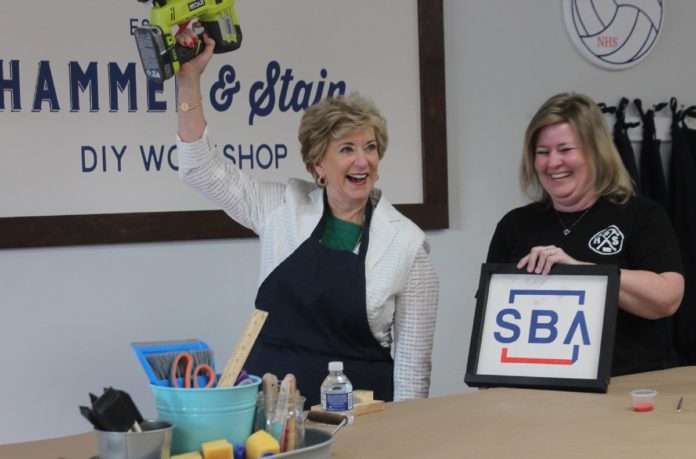 If successfully operating a nail gun was a prerequisite for landing a spot in the president’s cabinet, Linda McMahon would be a shoo-in.

Earlier this month, McMahon, who is serving as the 25th administrator of the U.S. Small Business Administration, received a hands-on lesson from Christine Smolenak, owner of the Holland-based DIY studio, Hammer & Stain. Though hesitant at first, McMahon soon mastered the machine, crafting her own wooden plaque emblazoned with the “SBA” logo.

While designing her creation, McMahon chatted with Smolenak about the trials and triumphs of operating a family-owned business, which opened its doors at 202 Holland Road on May 23. The visit was part of McMahon’s Ignite Tour, a nationwide venture that allows her to speak firsthand with area entrepreneurs to learn about their needs, goals and successes.

Upon stepping foot into the quaint shop, McMahon instantly immersed herself in Smolenak’s world. Donning a black apron over her white blazer, she took time to discover what Hammer & Stain is all about. Smolenak, who was joined by her children and other relatives, explained how the studio’s clientele is incredibly diverse. In just a few days, an expectant mother came in to design a larger-than-life, 6-foot ruler; a bachelorette party stopped by before heading to Atlantic City; and seven couples custom-designed their own cornhole sets, which she said have been top sellers.

“It has really gotten us very noticed,” Smolenak said of the bean bag toss.

Smolenak went on to describe how everything, whether it’s a sign or coffee table, is personalized for each guest. Nothing is mass-produced, and anyone who comes into the studio for a workshop has the ability to customize their project. Despite opening right before the often slow summer months when people are vacationing, Smolenak told McMahon how Hammer & Stain has been off to a steady start.

“We are doing well enough that I can pay for the rent and pay for the supplies, which in 10–12 weeks, is phenomenal,” Smolenak said. “So, I’m not going to tell you we’re making tons of money. But we are in a position where we are paying the bills.”

McMahon nodded in understanding. She then asked Smolenak whether she’d be open to teaching a class for local teens on not just DIY, but how to turn a hobby into a successful business. Smolenak, who boasts 25 years in the financial services industry, was excited about the suggestion, informing McMahon that she used to teach finances on a volunteer basis to students in Philadelphia.

Hammer & Stain was McMahon’s 53rd district stop out of 68 on the Ignite Tour. Over the past few months, she has absorbed the stories of accomplishment and hardship told by dozens of business owners. Still, her energy wasn’t flagging in the least. For her, being on the road is the best part of the job.

“I like to be out and meet with our small businesses throughout the country, hear what their issues are, what they would like to see happen, hear what’s happened that’s benefiting them,” she said.

District offices are responsible for determining which small businesses are included on the tour. Many, including Hammer & Stain, have previously worked with the SBA through a loan program or mentoring service. All types of businesses are featured on the tour, including Victory Gardens in Warminster, which welcomed McMahon prior to her visit in Holland.

“I love business. I don’t care what kind of business it is,” she said. “I’m incredibly impressed, and continue to be impressed, by the clever innovation from entrepreneurs and the things that they think about.”

During each visit, McMahon draws on the highs and lows of her personal entrepreneurial journey. Along with her husband Vince, she helped grow WWE from a 13-person regional operation to a publicly traded global enterprise with more than 800 employees in offices worldwide.

“We took that from just a mom-and-pop business,” she said, reflecting on how she and Vince used to share a desk in their basement.

So far on the Ignite Tour, McMahon has heard owners bring up a common issue — lack of a skilled workforce. According to her, there are currently 6 million jobs available that businesses are unable to fill. To combat this, she explained how President Trump invited approximately 25 companies to the White House earlier this year to discuss how these positions can be filled by qualified individuals. The majority, including industry giants such as Walmart, FedEx and Lockheed Martin, pledged to create internship and apprenticeship programs that will train 3.7 million workers over the next five years.

“I think the administration is clearly making its mark and I think President Trump wanted someone in this position at SBA who had actually created a business. I’ve been through the ups and downs. I’ve been bankrupt and lost everything, and come back from that,” she said. “I’ve built a business from the ground up. If anyone was going to advocate on behalf of the 30 million small businesses, it’s got to be somebody who knew what they were talking about.”

McMahon also stressed the importance of putting political differences aside when it comes to supporting Smolenak and other entrepreneurs like her across the country.

“It’s the least partisan industry because everyone wants small businesses to succeed,” she said. “It’s our economy. It’s our workforce. It’s everything.” ••

For more on Hammer & Stain, visit hammerandstainholland.com. For more on the Small Business Association, visit sba.gov.

Samantha Bambino can be reached at sbambino@newspapermediagroup.com

DIY Crafts : My tops picks for today's post are...

DIY : On the lookout for a new place to call...