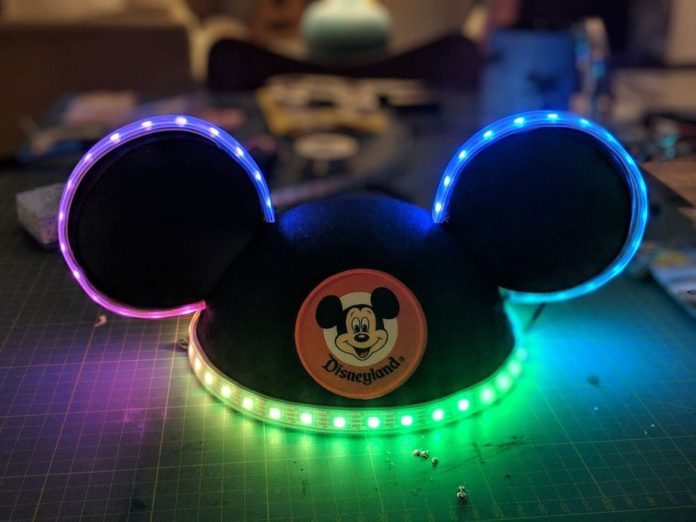 DIY : How to Make Your Own Glowing LED Mickey Ears – Hackster Blog

Mickey Mouse has quite the following as the lovable mascot of the Walt Disney Company. If you’ve ever taken a trip to Disneyland or Disney World, you probably even snagged a Mickey ears hat, which is probably the most iconic souvenir on the planet. But, if we’re being honest, those mass-produced hats are a bit boring. So, why not add a little flair by following JustinB37’s tutorial to integrate some glowing LEDs?

JustinB37’s wife has a pair of custom Minnie Mouse ears that are constructed from flowers and gold wire, and he was jealous. Naturally, he had to get on her level, and designed these glowing Mickey Mouse ears. If you want to make your own pair, you’ll need the hat itself, 2 meters of Adafruit NeoPixel strip, an Adafruit GEMMA M0, a 2000mAh lithium-ion battery, wire, and some fabric glue and RTV silicone.

Once you have all of your supplies ready, start by cutting the LED strip to length. One loop will go around the based of the hat, and two more loops will go around the ears. Then solder wires to link the strips together into a single chain. Next you’ll glue the strips in place, and route the wires to the interior of the hat. There you’ll attach a small fabric sleeve to house the GEMMA M0 and battery. After that, just program whatever animations you like and connect the wires, and you’ll be ready to wear your new and improved Mickey ears hat!

Life Hacks Ideas: 20 WAYS TO CLEAN YOUR HOUSE IN JUST...