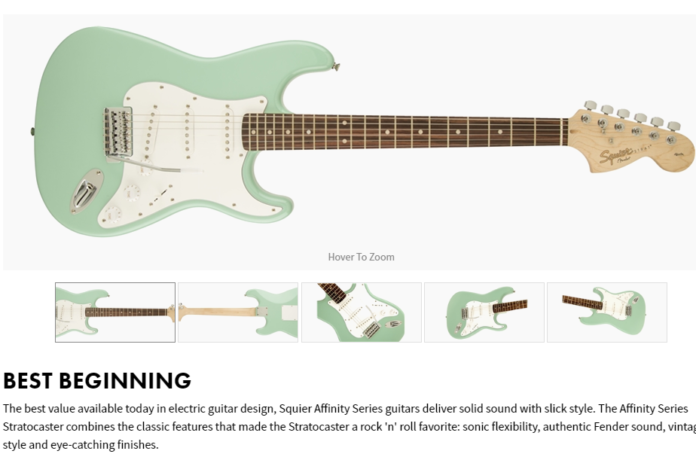 DIY : How to make your cheap Squier Strat play and sound better

How to make your cheap Squier Strat play and sound better

A lot of us start of on beginner or entry level guitars or get them as a backup and then realize that these are pretty nice and comfortable to play for example my made in China Affinity Strat is a very comfortable and good looking strat in Metallic Blue.
The rosewood fretboard and maple neck has a very comfortable grip and the finish is top notch.I liked it so much that i decided to start to use it live and that is when i realized the difference between a pro level strat and an entry level strat.I was getting horrible feedback and the tuning stability was way off and i had to retune after every song.
Back home after the gig this got me thinking as to why my American strat does not have these problems and on investigation i found that the US Strat has 5 springs in the tremelo cavity and the Squier has only 3 therfore the bridge was moving about too much and causing tuning problems,i had a spare spring lying around from an unfinished project which i promptly installed in the tremelo cavity and that immediately gave the bridge a firmer feel and it reduced the tuning problems.The floating bridge thing is a sure shot disaster for Squier type strats and one should tighten the tremelo claw spring so that there is very little rocking motion upwards a la Steve Vai on the bridge.

The squealing pickups and feedback were really irritating at the gig so i promptly threw out the bridge and the neck pickup but wait i kept the middle pickup because it is reverse wound for noise cancellation in positions 2 and 4 on the 5 way switch-cool!
I had a good stash of pickups from the last Guitar Centre sale i went to and i chose the Seymour Duncan Hot Rails for strat in the bridge and put the Fender Hot Alnico 3 American Single coil pickup in the bridge.On soldering all these parts together i did the Eric Johnson trick that is wiring the bridge pickup to the lower tone control pot and the neck pickup to the higher tone pot so that i can control the shrillness of the bridge pickup.

The guitar sounded like a classy beast and i was feeling really stupid for having shelled out loads of money on the US Strat though i really love it the way it comes ready out of the box.

The last thing i did was put a graphtech nut and graphtek bridge saddles on the Squier and it was ready for world domination all it needed was a decal on the neck/head stock that said The Best Strat in the world in bold italics.The graphtek nut has micoscopic teflon-more slippery than graphite,rolls the strings back into tune.The graphtek saddles/string savers-super slick string savers help stop premature breakage .Microscopic ball bearing lube action makes them even more slippery than graphite.

This guitar has become my main touring axe and i plan to actually rub the Squier deacal off and write something stupid or maybe get Eric Johnson to autograph the Head stock with a sharpie cause a lot of the ideas came from studying what he does to his Fender’s!

DIY Skin Care Tips : Do you deal with dry...