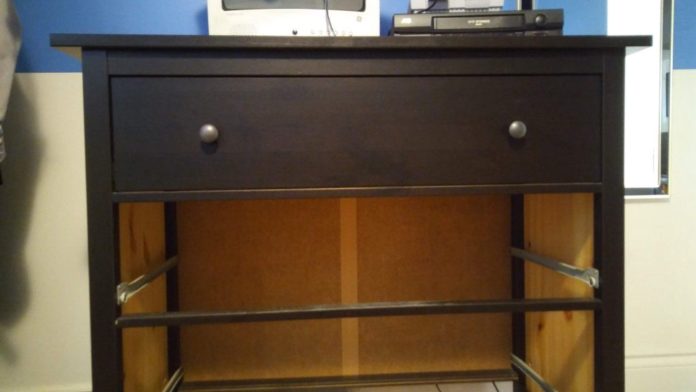 DIY : How I Saved Myself $300 by Repairing My Ikea Dresser

I’ve written my fair share of “homeowner war stories”. Last year I had to repair my roof after a freak windstorm. Before then I repaired my dishwasher and the list of repairs goes on. That’s why it’s so important to have an emergency fund.

This homeowner war story is a little different. Instead of repairing my house, I’m going to talk about repairing the furniture in my house.

I’m a big fan of Ikea furniture! It’s a good way to buy decent furniture at a discount. I’ve had nothing but good experiences, until I bought an Ikea dresser.

Putting my Ikea dresser together was a challenge to say the least. Ikea is known for not having the easiest to follow instructions. It took me almost 8 hours to assemble my Ikea dresser a couple Christmases ago. Once I put it together, I was pretty proud of myself. I thought all the hard work was done. Unfortunately, nothing could be further from the truth.

For the first few months, I didn’t have any issues the dresser. It worked perfectly fine. I couldn’t be happier. Then I noticed that the drawers started to close funny. I looked a little closer and saw that the wood at the bottom of the dresser drawers was sagging.

Inside the Ikea dresser drawer, it says that each drawer can handle a maximum of 44 pounds. I barely had 10 pounds of clothing in each drawer and it was still sagging. Not cool! It got so bad that I had to store half my clothes in a green garbage bag in the laundry room temporarily to lighten up the weight of the clothes in the dresser drawers. (This isn’t what I expect I should need to do when I spend good money on a new dresser!)

Despite fewer clothes in my dresser, the problem kept getting worse. I couldn’t open and close the dresser drawers without great difficulty. The last few weeks were especially aggravating. It got so bad that the bottom of my dresser drawers were falling out on a weekly basis. I knew I had to do something to keep my sanity!

Save Money with DIY Repairs

At first I looked into buying a new dresser, but when I realized how expensive new dressers were, I decided against it. Besides, I barely had my Ikea dresser for two years. I didn’t feel as though I should be buying a new one just because Ikea was too cheap to use strong enough boards to reinforce the bottom of its dresser drawers.

I searched online to see if other people were having the same problem as me and found out that I wasn’t alone. There are plenty of videos on YouTube on how to fix the Ikea “saggy drawer” problem. There are even products being sold on Amazon to reinforce Ikea’s drawers. (You’d think Ikea would take a hint and use stronger material for the bottom of its dresser drawers, but I digress.)

A helpful video on how to fix an Ikea drawer.

I decided to go the DIY route and create my own solution. I’m no Mike Holmes, but I know how to use a power drill. For under $10 I repaired my dresser. I bought screws from the local hardware store and used scrap wood to reinforce the bottom of the drawers.

This is a lot better than buying a new dresser. I estimate I saved myself about $300 by repairing my own dresser. (If the women don’t find you handsome, they should at least find you handy, as Red Green likes to say.)

If you buy an Ikea dresser, be forewarned that you may need to do repairs like this yourself. Unless you’re handy with a power drill, you might be better off spending a few more dollars to buy a better made dresser. At least you won’t have to go through the aggravation that I did with my dresser drawers constantly falling apart.

We live in a society where we like to throw everything out. The next time your furniture is damaged, instead of throwing it out, try to repair it. You’ll save yourself some money and you might even feel confident enough to tackle a DIY home repair on your own next time.

Sean Cooper is the bestselling author of the book, Burn Your Mortgage: The Simple, Powerful Path to Financial Freedom for Canadians, available now on Amazon and at Chapters, Indigo and major bookstores, and as an Audiobook on Amazon, Audible and iTunes.

DIY Crafts : How is this the first time we're...