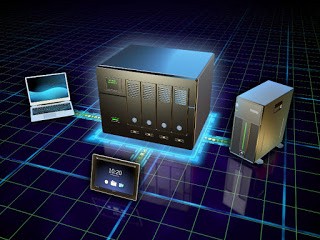 NAS stands for Network Attached Storage. A method for making a hard drive accessible to anyone over a local network, for storage, backups, etc. Most common in the business sector, NAS allows for a common place for all backups to be sent, work to be stored by employees, or common files everyone needs to access to be saved. Most can be programmed to store data in a RAID 1 array, or data mirroring. Basically, a NAS can be setup to store its data mirrored across 2 different hard drives, in the same NAS computer. This gives a level of redundancy. If one of the 2 drives fail, the data will be safe on the second drive. Western Digital make the most popular commercially available NAS systems for consumers, under their brand “My Cloud”. Western Digital My Cloud systems are currently my recommendation to anyone looking for a redundant storage method for their families or small businesses, outside of making and configuring on yourself.

At the heart of a NAS system, there is just a computer. You can use an old computer you have laying around if you want to, or you can use a Raspberry Pi (as I’ll be showing the guide for). The Raspberry Pi allows for a small form factor, low power consumption computer base, that has 4 USB ports for connecting storage drives, and onboard ethernet. The only limitation to the Raspberry Pi for this use, compared to other bases, would be the speed. The Raspberry Pi is limited to 10/100 mbps speed, whereas newer dedicated NAS systems can run 10/100/1000 mbps (gigabit) speeds. However, for the cost, the pi is the best option for network storage needs if you are on a budget.

Now, the difference between a NAS and a cloud are a little more obvious than you may think. A cloud is a common term thrown around, but few understand what it actually is. A cloud is just you, storing your data, on someone’s computer somewhere. Google cloud keeps your data on their server, Onedrive is stored on Microsoft servers, iCloud is stored on Apple’s servers, etc. A cloud is just your data, accessible anywhere, being hosted on someone’s computer. A NAS, usually, is just for data storage locally. So in your house, at your office, etc. If you setup your NAS for access outside your house, you essentially have your own cloud.

One other thing to note, before we get too far into this, is file formatting. Whenever a hard drive is initialized for file storage, the drive must be setup with a file format type. A certain type of indexing to help the drive communicate with computers, and store data in a way that logically makes sense. There are 3 most popular formats today worth knowing about. Step 1: Connect a drive to one of the pi’s USB ports. Drives with external power sources work best due to pi’s limited power output over USB. This drive, when configured, will act as the storage for you files. For ease of use, plug in the hard drive before you turn on the pi. Step 2:

For this guide you will need a terminal window. If your pi auto-boots to terminal, awesome! if not, hit CTRL+ALT+T(depending on the age of your Pi software) or open a terminal window from the menu in the top left.

Install necessary packages for ntfs to work (linux works off a series of “packages” to help it run commands it needs) NTFS (most commonly Windows file systems) are by default not compatible with Linux. So here we are installing a package that will allow us to read and write to NTFS file types. Type the following command into your terminal: ‘sudo apt-get install ntfs-3g’

Identify path through fdisk Linux by default does not make any newly attached storage device accessible. We need to identify where in the system our hard drive is, so later we can “mount” it to a directory for use. Type the following command into your terminal: ‘sudo fdisk -l’ You sould see all the disks on your system show up. Assuming you don’t have any other storage devices plugged in, the second disk should be your storage drive. It should be labeled something like /dev/sd__

Create a directory to mount the drive Now that we have identified where the drive is in our computer system, we need to create a folder for it to mount to. Mounting the drive makes it accessible for read/write. Type the following command into your terminal: ‘sudo mkdir /media/USBHDD’ This is creating a folder, named USBHDD in the /media sub folder.

Mount the drive Now that the mount folder has been created, we need to actually mount the drive. The command below is the one I use for my drive located at /dev/sd__. If when identifying the path to your hard drive, you had a different path, than you may need to change the command. Type the following command into your terminal: ‘sudo mount -t auto /dev/sd__ /media/USBHDD’ Now, if you navigate to /media/USBHDD, you will be in the directory for your hard drive!

Download Samba Samba is a program that emulates a windows network share. Basically, by installing samba, you will be able to read/write to your external hard drive from any windows machine. Type the following command into your terminal: ‘sudo apt-get install samba samba-common-bin’

Setting up the .conf file Now that Samba is installed, a bit of configuration is needed. Here we are going to set the location for the Samba share, as well as permissions and names. Type the following command into your terminal: ‘sudo nano /etc/samba/smb.conf’

Next, scroll down to the bottom of the file, and type the following: [Cloud] comment = Cloud Folder path = /media/USBHDD valid users = @users force group = users create mask = 0660 directory mask = 0771 read only = no Once you are done, hit “Ctrl+X”, then “Y” when prompted to save and exit the file.

DIY Crafts : With these easy to follow free plans...