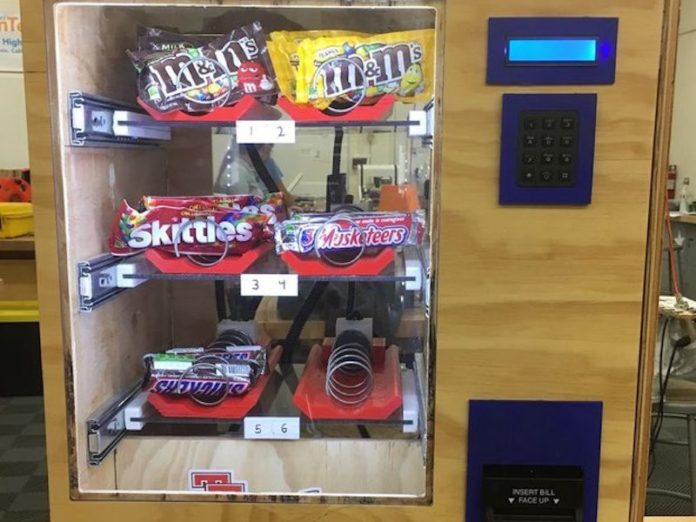 After deciding that there should be a vending machine in their classroom, Tustin High T-Tech engineering students were challenged by their teacher to simply make one. This may seem like a task that’s easier said than done, but these students were indeed able to make such a device as a senior project. As a bonus, it also functioned as a fundraiser for their engineering program.

The machine is powered by an Arduino Mega board, using Adafruit motor drivers to turn a series of six steppers and coils that push out snacks. Users insert a dollar bill — and only a $1 bill, making for no change issues thus its name — into a “Coinco BA30B” bill acceptor, allowing them pick out snacks with a keypad and LCD display near the top of the device. An acrylic panel on the front along with LED lighting lets people see what’s in stock, and this material is also used to form shelves for the six candy coils.

Arduino code for the build can be found here, and Solidworks design files are also available. Results are seen in the video below. Interestingly, the video features some relatively healthy granola-type snacks, however the writeup pictures straight-up candy. While both seem like good alternatives, one could also see this type of machine used in hackerspaces and machine shops to vend parts on demand!

Home : How Efficient is an Underfloor Heating System? – Best...

DIY Furniture : They turned trash into treasure, and so...

Life Hacks Ideas: How to Open a Can in an Emergency...