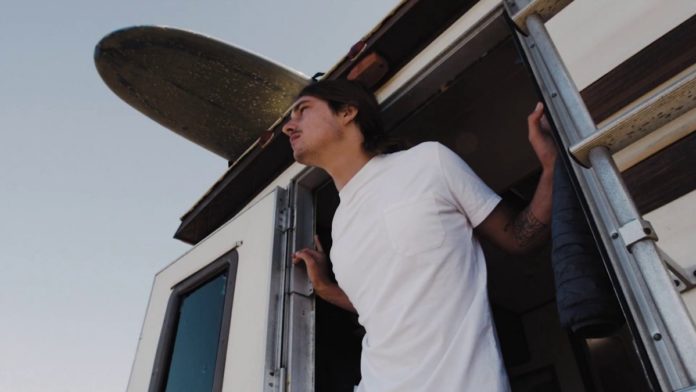 DIY : Goth Babe is more than a music project, is a lifestyle.

Griffin’s contact with nature resembles on the upcoming releases.

Once creating music from the bedroom, Griffin aspires new moods and influences inside of his camper, exploring the wildlife, climbing mountains, and surfing in the company of your pup.

Griffin Washburn is the man behind of Goth Babe, a solo project that he started on college circa 2015 when Fuzz Ghost EP came out, a raw garage surf lo-fi, developing to a dreamy indie-pop as the latest single Weekend Friend out on January 19 of this year.

After parting ways with The Lagoonas, he released a homonym EP called Griffin Washburn in June of 2015, then, he began to work under Goth Babe name. During this period, he moved from Memphis to Nashville to drop Shall We EP. In 2017, synth-pop Early Mornings was available in the middle to Griff’s transition from New York to Los Angeles.

Frequently working on singles and EPs, polishing and refining the sound to get his peak so far. Sometimes reached 3.2 million on YouTube by the channel TheLazylazyMe and 4.7 million on Spotify.

Down on Pacific West Coast, the journey in the camper through the US, writing, producing and releasing on his own, resembles on Into The Woods, a biopic directed by Sean Penn under the mantra: live your life and follow your dreams under all circumstances.

I moved to LA first from the move away from NYC. I just discovered this wonderland this summer while driving up here with my pup. The trees, people, and climbing keep me here.

“Goth Babe is Griffin Washburn enjoying himself”. The bio wrote on the Bandcamp page reflects in his life traveling across the country as a nomad knowing every kind of people, making new friends, playing different gigs, discovering the world. Experiences that influence on the best way through the music, his most devoted vocation alongside Surf.

I record everything in my truck. I have 100 watts of solar power that lets me park wherever and start making. Generally, I just mess around with Ableton until I have a loop and then I start making the timeline of a song.