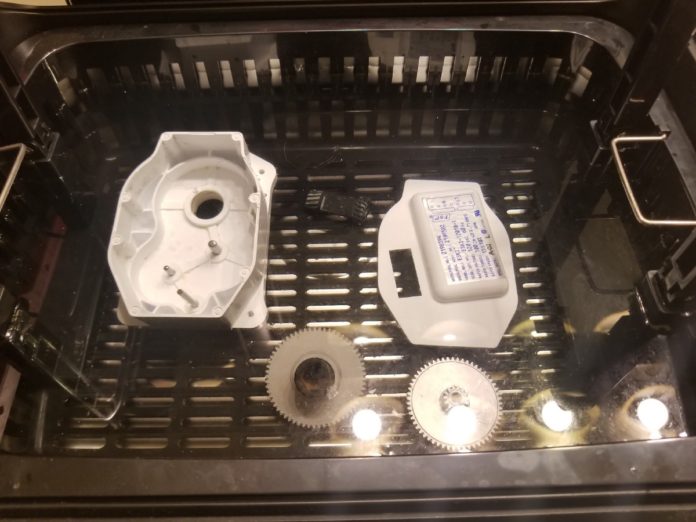 It’s Friday 5/25/18 and I just got home from work ready to kick off a long weekend of personal projects that need my attention. Since it’s over 100 degrees in my garage I walk over to the refrigerator to get some ice water, I can hear the motor spinning but no ice is coming out. A quick peek inside the freezer door and the bin is full of ice, must be something wrong with the motor. After removing the two screws holding the motor access door I was greeted with an avalanche of parts……

Alright so we found the source of the issue, now to fix it. A quick search on Amazon showed similar motors running $80–100, since this fix will take me less than 30 minutes I opted to just extend the lifespan of the motor. The manufacturing date listed on the label is April 2002, considering this thing ran for 16 years means a proper repair and rebuild will make it last beyond the lifespan of the refrigerator it is installed in.

First we need to figure out what caused the failure

I was immediately covered in grease the moment the access door was moved and the parts came tumbling out; the grease was mixed with ice crystals meaning there was water getting into the motor housing somehow. Removing the ice bin revealed the real culprit, the plastic guide bushing and seal housing was destroyed from years of use:

Don’t worry! I designed a 3D printable replacement part and it is listed at the end of the article. This is the one part that will be difficult to source, and replacing this component BEFORE your motor breaks is going to save you time and headaches later. If you have a similar model fridge and notice this part is cracked you might want to swap it out ASAP.

Once the seal unit failed water slowly dripped down into the motor housing until the expanding ice forced the rear housing apart. Luckily for us the rear housing was ultrasonically spot-welded to the main housing, you can see the small rings around the perimeter on the image below:

This is a GOOD thing for us because it means there is not much force acting on the rear housing. The way all of the gears are aligned puts minimal stress on the rear housing, so as long as we can get a decent bond with epoxy between the housing halves we are golden.

The grease has been in there since it was assembled at the manufacturer, and had been contaminated with ice crystals so we have to get it all out. I opted to use my ultrasonic cleaner, you can of course use water and paper towels as well.

Once your parts are clean and dry we need to re-assemble everything and make sure we put in new grease. I used white lithium grease as I do with most sealed gear-trains, there might be a better grease for freezer temperatures but this is all I had on hand.

Now it is time to mix up some 5 minute epoxy, you can get this at any hardware store. Make sure to clean off the surfaces that will be glued with alcohol again and lightly sand them to make sure the bond is as strong as we can make it.

Now put this aside to let it cure, each brand of epoxy will need a different cure time so make sure to read the label. While this is curing we can get started on the next step.

Now that the motor is re-assembled we need to fix the source of the problem so it doesn’t happen again. The seal housing was letting water slowly leak into the motor, I had a terrible time finding a replacement so I opted to 3D print one myself. If you have a 3D printer scroll down to the bottom for the STL file link, if you don’t have a 3D printer there is a link to shapeways so that you can order a replacement.

DIY Furniture : Think twice before throwing out your old...

DIY Crafts : File these genius ideas away for the...