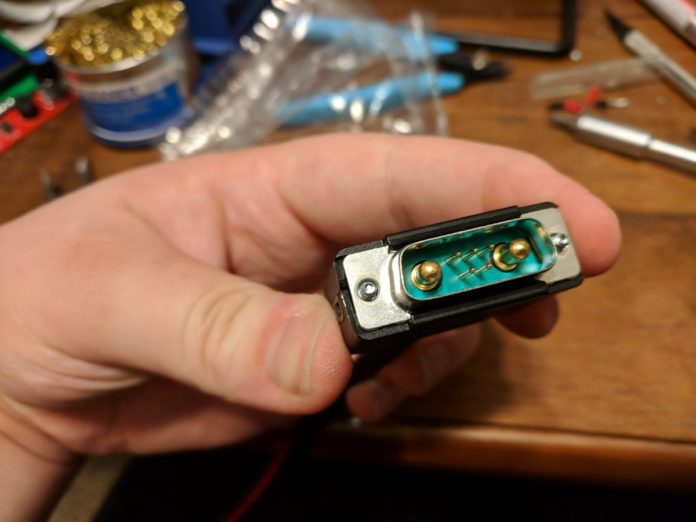 All my parts have arrived, and I get to power her up!

I’m taking the opportunity to replace the whole bed and connectors with my own parts, so that it’s easier for me to hack and repair in the future. Let me show you the finished bed, and the other little tweaks I made.

Wiring up the heated bed

Like I mentioned in my last article, I wanted a nice, beefy connector to carry the ten amps that my heated bed draws. I settled on a D-sub connector that had two nice, chunky copper pins for current, and five smaller signal pins.

The heating circuit didn’t have any holes to solder components through the board, so it all had to be surface-mounted. In order to get a connector firmly on the heater, I used two-part epoxy. Even though it was my first time using the stuff, I had no problems, and it came out great. The connector is rock-solid.

I wrapped the cables in some plastic sheathing, twisted the signal wires, and sealed everything in heat-shrink tubing, so it looks nice and clean. I’m a little obsessive over the craftswomanship of my cables, but they look so nice, don’t they?

It’s a huge upgrade from the weak pins on the original cable! I had to screw the bare power wires into screw terminals before. Now I have a solid, polarized plastic connector. While I was replacing that plastic terminal block with a polarized, pluggable connector, I decided to a few more tweaks.

I definitely get obsessive over connectors and cables, but in my opinion, they make a huge difference in my quality-of-life while I’m tinkering with this thing. I hate using screw terminals, and the original board used those a lot. It even expected me to use screw terminals on the really fine twenty-six-gauge wire that drives one of the fans. So of course I replaced everything.

A lot of power moves through the connectors on the end of the board, and they are all in positive-negative pairs, so I replaced them all with polarized plugs. The extruder fan (terminal D9 in the image above) is a tiny computer fan, on twenty-six gauge wire, so I used header pins instead of the green plugs. However, the others will be carrying five to ten amps, so those got the chunky green plugs.

The cables were finished, the bed circuit was wired, and my borosilicate glass arrived, so we get to put everything together! Since I got so excited about the glass in my last article, I’ll start with that.

It wasn’t terribly exciting to look at, honestly. It was just a square of glass. So I went ahead clipped it to the heater circuit, and stuck some BuildTak to it.

I also dabbed some thermal paste into the hole in the center of the heater circuit, I stuck the thermistor in there, and held it in with a strip of Kapton tape. That should help me get an accurate temperature reading.

Surface treatments for 3D printers vary, and glass in particular is really slick, so everyone recommends putting something on top in order to improve adhesion. I really love the results I’ve gotten from BuildTak, which is a polyetherimide (PEI) material reinforced with fiberglass. It’s tough, plastic adheres really well to it, and it lasts for a lot of prints. It stuck just fine to the glass.

Then everything got plugged-in! It looks great, in my opinion. It might seem like a bit of a rat’s nest, but at least it’s an organized rat’s nest. Very soon, I’m going to print a case for all these boards, which should let me tie up these cables, too.

I wanted to tinker with a few more things, now that this printer has a top-of-the-line heated bed.

First, I enabled the more fine-grained proportional–integral–derivative (PID) controller for the heated bed, since the bed has a lot more thermal mass now. A PID control algorithm tweaks the input power to the bed, based on the feedback that the control board gets from the thermistor in the bed. The alternative is just turning the heater on when the temperature is too low, and turning it off when it is too high. The PID controller has some variables that need to be tweaked, and my printer’s firmware (called Marlin) allows you to run a tuning sequence to get some ideal variables.

While tuning the bed heating, I discovered my first problem. I swapped the 10A power input with the 5A power input, and so the board started drawing way too much current from the 5A input. The fuse holder started to melt (never a good sign…) and I managed to notice it and stop everything before the fuse blew. I just removed that fuse, and replaced it with 14-gauge wire, until I can get some heavier fuse holders.

Once I replaced the fuse, and swapped the power cables (which was much easier since I replaced the terminals with actual plugs) I ran the tuning sequence again, and the bed heated perfectly. Its performance was impressive: while the heaters were turned off, it took a full sixty seconds to lose five degrees. That thermal mass will seriously help stabilize the bed temperature.

I also tuned the PID variables on the extruder, which functioned as a nice test that the extruder was wired correctly, and gave me a chance to feel around and make sure nothing was heating up too much. I know, I need to upgrade the fuse holders. I’ll get around to it.

After all that fiddling (and months of procrastinating), it works! I’m proud of the work I’ve done, and I’m excited to finally print something.

DIY Crafts : How to make your own reclaimed wood...

Home Design : This small grain bin home could be used...

DIY Projects Video: Do It Yourself BFF Halloween Costume Ideas with...