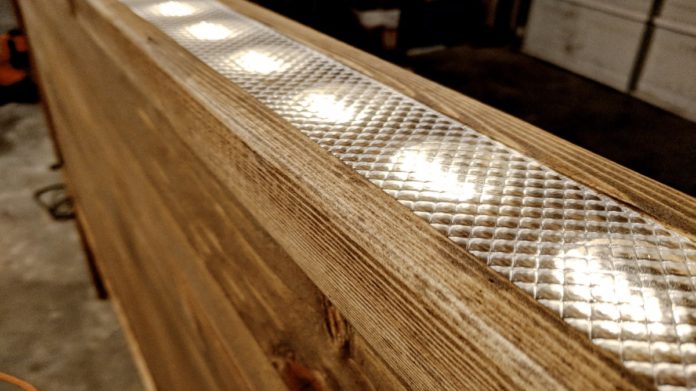 This has to be the longest of all the woodworking projects I’ve done so far. It all started when our little one started sneezing a lot during night last fall (2017). My wife and I had a theory because nothing else made reasonable. Our theory was his head is so close to the wall and it gets too cold at night because that wall is one of the outer walls.

There! We needed a headboard. Buy one? No, that doesn’t sound right, does it? So off we started building one for our king bed.

The choice of wood came from wife because it had to be light enough for the two of us to carry around when moving. We decided to get pine dog-ear picket fence wood to make the panel. Then 2×4 for the frame. The total cost was less than $100 IIRC.

Making a panel out of pickets was hectic, though. They were crooked to begin with and 8 ft long. It would have been easier had I owned a jointer and a thickness planer but in the absence of those I ended up using the good old table saw and an electric planer.

Cutting a straight edge on these long boards was tricky. I fixed a long straight piece of plywood to a picket and slid that edge against the table saw fence to make the opposite side of the picket straight. Then remove the plywood and flip the pice to cut the other edge.

Next was to cut all the groves and joints into 2×4 wood. Then a quick dry assembly to see how it looks.

At this point, I had the idea to have reading lights built into the headboard. The design was all in my head, so here’s how it started.

The 3M sticker was really good but at the end where the connector jack was soldered it wasn’t strong enough to hold on to the wood. I made a slit on the other side of the stick and inserted the wire, so things will be steady.

Then it was time to do the wiring. I found this neat RF controller I can hook to the LED strip that’ll make it really easy to control. The power pack is fixed to the frame using double sided tape. Wires are kept in-place using hotglue.

Finally, it was time to stain and finish. I used a light walnut stain and clear polyurathane finish.

DIY Crafts : Looking for a fun activity for the...

Home : Leave a Light on in the Window: A Poem

Home Improvement : Decorate a Room With Custom Bedding and Window...

DIY Crafts : Christmas Hacks and Tips You Wish You...