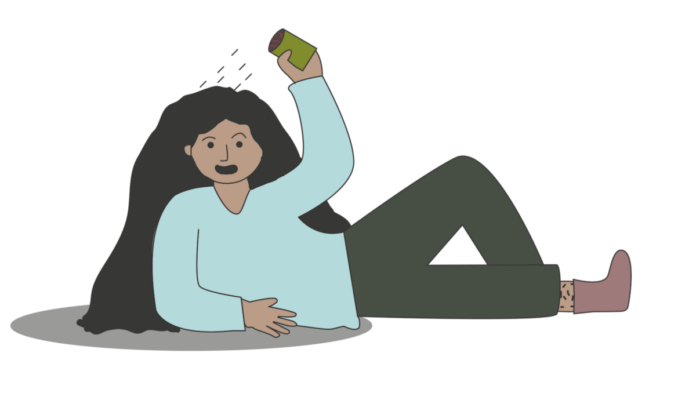 All the questions you didn’t know to ask about this new hair product deal.

We wanted to write an article about a couple of hair products — but then we started doing some research on dry shampoo and shit got real fast.

To people with all different hair types: we see you and we love you because their are lots of different kinds of dry shampoo from stuff for naturally dry hair to the real greasy shit — you just gotta find the right kind for you. Love for all.

If you don’t use dry shampoo this article still has info about other things that are good to know. Obvi we would think that cause we wrote this shit but it’d be cool if you listened to us anyway.

When did dry shampoo become a thing?

We are obvi people who ask too many questions for lyfe to answer. But once we started researching dry shampoo, one of the first questions that came to mind was: what is the history? How long has this been a thing for humans?

I always thought of it as something for skinny blondes with beach waves using it, but that’s probs just cause ads + skinny blondes are seen as the shit in a lot of Western societies. Sadness all around (no offence blondies, but everyone is beautiful).

As usual, we are mooching off of other people’s info and making sure their sources seem legit. There’s this sweet blog we discovered that had a lot of info on dry shampoo, so here are a few highlights — but if you want to know more you should go check it out (it’s worth your time).

People in Asia knew what was up. They used clay as a form of dry shampoo in the 15th century. Idk why but the century thing has always confused me… just one of those things (truth).

It was used for wigs in the US. My guess is because those things created some sweaty ass heads. But I may be projecting my sweaty ass head probs onto others. Lyfe.

This is when the commercial shit became a thing.

Homemakers wanted a quick fix to deal with their hair, cause that life is no joke.

As usual, a celeb made it more popular. This time it was Lesley “Twiggy” Larson. But I’m usually not very interested in celebs so let’s move on.

I remember looking at a dry shampoo bottle and thought: what the fuck are humans doing to their hair? I mean for real.

I didn’t know what was in that shit so I decided to make my own, but was supes lazy and didn’t take the time to look up some of the chemicals in dry shampoo and why they might be bad for you. But here are some chemicals to look out for if you use it:

In doing a little research, we found out one of the main culprits: talc. This stuff is def one to look out for, cause it’s bad.

The American Cancer Society has listed talc as an ingredient to avoid because asbestos is “known to cause cancers in and around the lungs when inhaled.” So best avoid that mofo cause cancer is not something to fuck with.

Dry shampoo in aerosol cans (which we’ll get to more of that later) also use some form of propane or butane to achieve that misty glory.

Low amounts of propane/butane are usually chill, but that doesn’t mean you should be spraying it all over your greasy head every damn day. Studies cited by the National Institute of Health have linked overexposure to propane to respiratory problems and headaches.

As with most things, the bad side effects come from LOTS of consistent exposure to this stuff. But it’s worth knowing about chemicals that can cause problems.

And if there’s a natural alternative to achieve the same result (spoiler: there totes is), then why not check that out?

Exposure to triclosan has been linked to a higher likelihood of colon cancer. This chemical is also bad news for the environment: in the US, it’s listed as one of the top 10 pollutants found in rivers.

And once this gets in a river, it turns into a toxin that can kill algae and other plant life. Aside from dry shampoo, this stuff is also real common in household soaps and toothpaste.

Other things to watch for

With commercial dry shampoo, there’s usually lots of chemicals at work. There’s a website called The Good Guide that provides loads of information about beauty products. It also lists what chemicals are in each, and if they are banned in any countries.

Naturally, we were curious about some of the best sellers so we looked it up. You can see how they perform in this nifty chart below.

Here’s how to read it: the higher up towards the top a bubble is, the more “use restrictions” the product has. A use restriction just means that in at least one country, regulatory bodies have made some laws against using too much of a chemical in consumer products.

The further to the right a bubble is, the higher the hazard score. This is a score created by the Good Guide website summarising the potential downfalls of stuff, both environmentally and for personal health.

Do people even use dry shampoo?

This shit sells. Who would have guessed that dry shampoo was a hot industry? But apparently it is. One of the top dry shampoo sellers is a company called Batiste. They sell 2.2 cans every second. That’s a lot of fucking cans.

The dry shampoo industry was worth 3 billion dollars (2.3 in pounds) in 2017. Idk about you but I did not see that number coming. And the industry is expected to grow even more in the next several years. This stuff is making it pour dolla dolla bills.

Out of curiosity we thought it would be fun to see how often people Google dry shampoo. I know you’re totes jelly of our fun filled lives.

In the past five years, search interest for “dry shampoo” has doubled according to Google search trends. Google assigns a search index score to everything that people search for with a number from 0–100, but they don’t tell you the raw search volume cause they’re stingy like that.

We should all probs chill with the spray cans.

Another thing worth mentioning: aerosols. You might use them on the regs. Not saying that as a judgment thing — we sometimes use them too, but are trying not to (hence this blog).

Examples of this aerosol shit? That airy, SPF 50 sunscreen with the spray top. Your fave perfume that makes you smell like good things. Also, most dry shampoo. That kinda stuff.

Most things that take a liquid and spray it out into some vapor-like shit is an aerosol, and those can be bad fucking news for the environment. They contribute to global warming and deplete the ozone layer. But to be fair, we’ve gotten a bit better.

Here’s the deal: before the 1970s, aerosol cans used this ozone-depleting chemical called chlorofluorocarbons (try saying that while drunk…most people just call them CFCs to keep it simple).

By the 1980s, most companies had taken this shit out of their products and the U.S. Environmental Protection Agency formally banned it from future products. So like, halfsie thumbs up.

Basically, this means that aerosols are still allowed as long as they don’t have CFC. But they still emit hydrocarbons which also contribute to global warming.

Hydrocarbons are better than CFCs but still not good. Kinda like eating cheap Italian food. Still tastes nice but we want fancy ass carbs in our lives — aka we should be aiming for no aerosols.

This has gotten bad enough that the state of California has started regulating any products known to have VOCs. Cue Where Is the Love by Black Eyed Peas am I right?

Wow we’re in p deep to this hair stuff; but I guess there is no turning back at this point. So here is some other semi-related stuff we found while deep in the hair product archives of my soul.

Apparently, climbazole is a fungicide that has been linked to increasing phototoxicity in algae and other water-dwelling plants. Phototoxicity just means plant injury — I obvi had to look that up too. Also “has been linked” means that smart people are doing research to find out more, but it’s still worth paying attention to.

Wow we’re in p deep to this hair stuff; but I guess there is no turning back at this point. So here is some other semi-related stuff we found while deep in the hair product archives of my soul.

Apparently, climbazole is a fungicide that has been linked to increasing phototoxicity in algae and other water-dwelling plants. Phototoxicity just means plant injury — I obvi had to look that up too. Also “has been linked” means that smart people are doing research to find out more, but it’s still worth paying attention to.

But then the chain just continues so less algae = less bb fish, etc. Obvi too much of a good thing can be bad too so we need there to be a balance and chemicals can get in the way of that.

The dry shampoo in my lyfe.

Just a quick heads, I personally have an interesting hair texture. I usually wash mine once a week, maybs twice if I’m super sweaty and it smells like ass — but I like to take on the grime.

I also have dry but greasy hair and no one ever taught me how to take care of it, so I use a mixture of things for all different hair types. But ya gotta know your body — the dry shampoo that works for me won’t work for all hair types.

I make my own dry shampoo so I don’t have to worry about the chemicals and I can’t love this shit enough. For real though. I can’t be washing my hair every day but I have major grease issues.

Here’s my regimen: I pretty much shower and then start using the dry shampoo once the grease really starts to show. I have some thick ass hair so I have to apply it in layers by the roots.

Since I have darker hair I use cocoa powder. It does smell, but I found the only issue is that I want to eat chocolate more — kinda like being in a bakery without being able to eat the sweets. But I’m getting p good at channelling my midwestern religious upbringing to practice self-discipline.

I usually apply it with my fingers. Some people use old makeup brushes but I didn’t have one of those since I don’t wear makeup on the regs, and just got makeup brushes last year. I was totes stuck in the 90’s just applying stuff with fingers, but my younger siblings were appalled so they gave me makeup lessons. What is lyfe?

Once I make the dry shampoo I usually keep it in one of those bb jam jars or a spice container. You know — reuse shit.

The recipe I use is easy and I found it on another blog — I obvi wasn’t the one to come up with the recipe. I realise this recipe won’t work for all hair types, but give it a go. The ingredients are supes cheap and it’s easy to whip up.

If you feel like this recipe doesn’t work for your hair texture, but are real into finding something without chemicals, please message us. We can go on this journey together.

Marginally Chill. Good vibes to all.